We board a ship for a two night cruise down the Irrawaddy to Mandalay , the same journey that Rudyard Kipling made so famous in his poem, the Road to Mandalay . It is a wonderful feeling to be traveling in his footsteps and the ship we are on recreates the atmosphere perfectly. 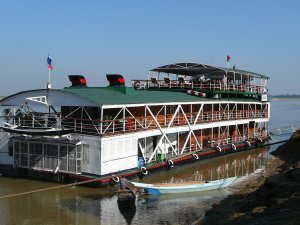 We are traveling on the Pandaw 2, which is a copy of the original Pandaw , designed in 1948 expressly for travel on the Irrawaddy . It has a draft of only three and a half feet, and what is mind boggling about the original is that it was built in Scotland and actually sailed from there to Burma with this shallow draft. The ships have been redesigned for today’s traveler and are a wonderful mix of modern day comfort with colonial design. Al l the cabins and fixtures are made of teak, the furniture is rattan and there is an extensive sundeck with teak reclining chairs. Our cabin opens onto the deck and there are two rattan chairs outside our door for our private use.

There are only 24 cabins and the ship boasts a staff of 26. However on our cruise there are just 4 passengers including us, so we get over 6 staff each!

Navigating the Irrawaddy has always been extremely difficult, because of its perilous waterways. It is a shallow and extremely wide river, full of sandbanks. There are neither locks nor weirs to control the water level, as there are on other great rivers of the world. Nor are there charts, as the sands shift with such rapidity that they would be out of date before the ink was dry. Instead they rely on a pilot ship that goes in front and marks a safe channel with bamboo poles. But even this method is not perfect, as we discover on our first night. At one point we are sandwiched between two fast shifting sandbanks that cut off our passage. We have to turn round and find another route past them. Several times during our trip we have two crew members standing either side of the bow of the ship measuring the depth of the river with long bamboo poles. They continually call out the depth to the captain and at one point we were down to less than 5ft.