Leaving Istanbul and on to the Black Sea

Spooky, especially with the Medusa heads (one on its side, and one upside down)supporting a couple of the columns 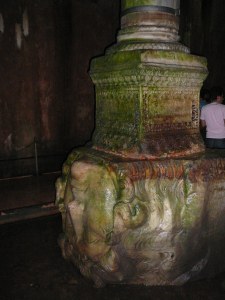 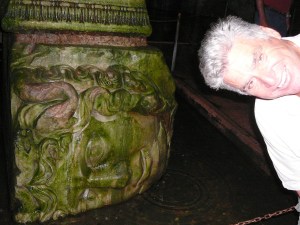 The ship leaves at 10.00 pm and sails along the Bosphorus to the Black Sea. It is a stunning sight at night. The Turks know how to dramatically light their Palaces and monuments and everything looks amazing as we sail pass.

The entertainment crew lays on a big party on the open upper deck and we dance and listen to music for the next hour or so. The two bridges that cross the Bosphoros are both similar to the Golden Gate Bridge but are lit with hundreds of tiny coloured lights hanging like rain from the cables. There is a mass holding of breath as we narrowly squeeze under the first, our clearance seemingly only a couple of feet below the bridge. 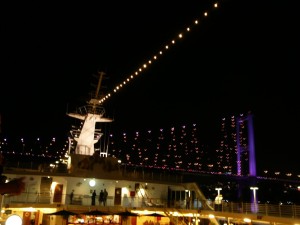 Breakfast the next morning affords us our first sight of the new group of passengers. We had hoped the Black Sea would attract an interesting group, but one look at the breakfast crowd convinces us that we are going to be very disappointed. Not only are most incredibly old, with several in wheel chairs or leaning heavily on canes, but none of them appears interesting. Not even interesting in a voyeuristic kind of way.

The best I could find:

The Black Sea is fairly new to cruise ships, and so it is the one place left to see for people who have been taking cruises for years, thus explaining the elderly crowd. The Fabulosity Meter has crashed back down to zero, and there is little hope for it recovering in the near future.

2 Responses to Leaving Istanbul and on to the Black Sea