Will Colette Find A Man?

Our next stop is just what we need to lift our spirits. We are finally going to see our first group of Huli men in their costumes and makeup, and they are going to perform a traditional Huli welcome dance for us.

We turn off the road and drive up a long unmade road for about a mile. At the end of the road is an attractive looking small hotel with beautiful grounds and a lovely view

But when we get there the dancers are not ready. They are still putting on their makeup.They hadn’t expected us to be there this early. But if they knew the widow and her mourners they should have suspected we might be.

We leave the men to do what they have to do, and explore the lovely hotel. Another mistake. It is only lovely when seen from the outside. 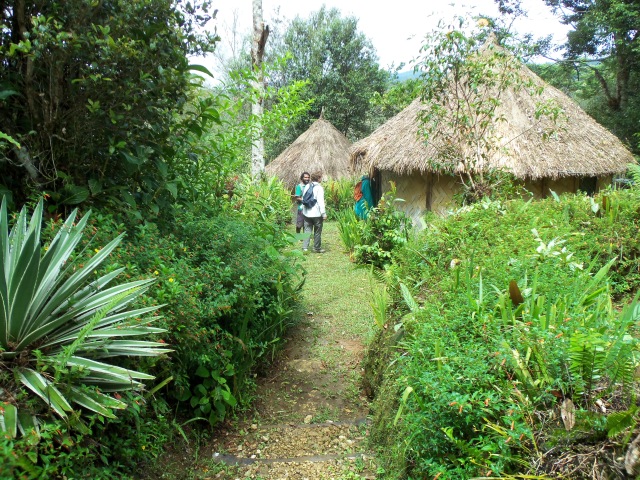 The style is similar to the Ambua Lodge where we are staying with the traditional individual round houses for the guests. But when we ask to look inside one we realise how lucky we are to be at the Ambua Lodge. These rooms take the term “basic” to a new level. They have earth floors.Three single beds are crammed into each room with rather grubby looking bedspreads. No electricity, no running water, no bathroom. There is one communal shower in a disgusting looking hut with no door. The communal toilet (just one) is so gross that the three men in our group all pee outside. The women do some sort of balancing act on top of the toilet. I don’t ask for details. Any complaints I might have made about the Ambua Lodge looking tired are hereby withdrawn.

When the men are ready we are called to the garden where they are about to perform. Two men appear out of the hut. They look magnificent in their headresses, costumes and make up. They carry drums which they beat in a pulsating rhythm, while dancing across the field.

I have no idea if they were wigmen before this but they are definitely a little light on their feet. Soon their drumming encourages four other Spirit dancers to emerge from the Hut.

They perform a series of short dances. This is a taste of what we came to PNG for and we are enthralled

After the dance we are introduced to the dancers. They are as interested in meeting us as we are in meeting them. Despite the language barrier there is a connection. This is a complete contrast to the widow and her mourners. Of course these men have not just lost a husband, although we do wonder about the drummers

We are invited to try and play their drums. Roger gets the hang of it immediately. I am beginning to find him annoying. I am musically challenged, and I should have known better. But I enthusiastically scoop up a drum and beat it with my fingers producing a rather strange strangled sound never before heard by the Spirit Dancers. There were several reactions I might have expected from them, but I had much rather they hadn’t chosen laughter. One dancer is particularly amused by my feeble efforts. He has a huge beak of a nose and a wonderful twinkle in his eye

He gives me a quick lesson and encourages me to hit the drum harder. I give the drum a hard whack and there is an immediate stinging sensation in my fingers. I pull a face and shake my fingers in pain. The Spirit Dancer collapses with laughter. He then realises that he might be offending me, tries unsuccessfully to straighten his face and nods an apology. But when I start laughing too and try again to beat the drum with an equal lack of success, I have him rolling in the aisles. And I thought they were the entertainment.

Lunch is served in the hotel’s dining room, a hugely exaggerated term for a large dark bamboo hut with one big table in the middle. There are no chairs, just a bamboo bench that runs around the walls. There is no power, which means there is no light. It also means that the only job our private chef has to do is to open large tupperware boxes which he has brought with him. He lays out an ample and tasty picnic. We are all hungry after our long morning, and eagerly gather around the table. Somehow Nellie gets there first.

After lunch we are going to see the aptly named skull cave. Our bus drives us a short way down the road. We then have to walk for about fifteen minutes through extremely muddy fields that are hard to cross.

Most of them are friendly and gather round us. But a few of the younger ones start crying. I know I am not the most attractive person to look at, but isn’t crying overdoing it just a little? The guide explains that this is the first time the young ones have seen white people. Once again we are the entertainment.

Our route to the caves seems rather circuitous as we cross a small stream and struggle up a steep, muddy, and seemingly little used path. Finally we come across a cave in the rockface. In the entrance is a small fire and two rather fierce looking Hulis.

The cave is a ceremonial burial ground of great spiritual importance. It must be guarded at all times and a fire must be kept burning at the entrance. In a second cave a little higher up the rockface the skulls of the departed are painted yellow for a reason we cannot fathom and stored on shelves a little like a grocery store. We are not allowed in the caves, but one of the guards climbs up into the cave and holds up two skulls for us to see.

At that precise moment a cell phone rings from somewhere on his person. He tries to ignore it and pretend that it is just a figment of our imagination. But the ringing persists. He smiles sheepishly down at us, but doesn’t know what to do. I tell him it is probably for me, while my imagination is running wild trying to think of where in that tiny outfit he could possibly be concealing a phone. I wouldn’t mind answering it for him. We wonder if the phone is inside the skull. He could hold the skull to his ear and say “Alas poor Yoric, can you hear me now?”

We return to the bus by a different route. It is a much shorter and easier path. It is hard to understand why we came the long way round. It is not until we get home and look at our photos that we realise the guard with the phone was in fact one of the spirit dancers. They made sure we took plenty of time getting to the cave, so that he could run round the quick way and make a second appearance as the guard.

We are left to wonder how the cellphone will change their world. They have no electricity or running water in their homes. No lights, no toilet, no television, no stove. But they have cell phones.

Meanwhile our guide has taken me to one side, and asked me if we would like to meet the village fortune teller. He tells me that the tour company has a policy that the fortune teller is not to be included in tours, because he uses spirits and skulls to tell the future, and because he casts spells. The more the guide talks, the more I realise that what we are really talking about is a witch doctor. He doesn’t foretell your future, he casts a spell to make it happen. The guide adds that the fortune teller charges you for a visit and it will be $5 each. The fearless five are up for anything and $5 seems a small price to pay for one more adventure. Plus I can think of all sorts of spells I would like done, but none of which I can reveal here. What I don’t know is whether his spells just work locally, or can he reach out to Sarah Palin? Can he turn Brad Pitt gay? Is it $5 per visit or $5 per spell? It could mount up if it is per spell.

Colette is particularly anxious to go. She went to a fortune teller eight years ago on one of her trips and was told that she would not meet a man during the next ten years. She has been haunted by this ever since, particularly as it has held true for the first eight of those years. And time is not on her side. She is fast approaching her sell by date. She is excited to hear of his powers and is desperately hoping that he can undo what the previous fortune teller said. If he can’t actually produce a man on the spot, he should at least be able to offer her the promise of one.

We meet the fortune teller in his own private little garden with a rather macabre altar piece in the middle. It contains the skulls of the last seven of his ancestors and he tells us his will join the others when his time comes.

He places one of the skulls on a board supported by two long poles.

He then balances one end of the poles on his fingers.

A distant look comes into his eyes. Either that or he needs glasses. He tells us he can feel the blood of his ancestors coursing through his veins, and that they are telling him that we have a long journey ahead of us. Bloody brilliant. He says that the spirits tell him that we will all arrive at our destination safely. I feel so much better, other than the fact that I have wasted $5. But Colette is not to be put off.

When the Fortune Teller asks is any of us would like a private session, Colette is like a little school girl, jumping up and down with excitement and yelling “Pick me. Pick me”. She is desperate to know when her prince will come, or at least show up on her doorstep. We leave her to her private consultation

A few moments later, she joins us. Her hopes have been dashed. The fortune teller told her that he needed more money before he could tell her about her future. She suddenly saw he was no different from the woman in the booth at the end of Brighton Pier. It is a terrible disappointment for her. She tries gallantly to laugh it off , but it is obvious that she still believes the previous fortune teller and knows she has two more years of loneliness ahead of her.

She has become a precious part of the Fearless Five and we try and cheer her on the long drive back to the Hotel.

Meanwhile I have to accept that my life will continue without Brad Pitt.

(Ed: And mine will continue with the relentless blogger!)

We all need cheering up, and back at the lodge we find just the thing to do that. Coffee is grown in PNG and we have been having delicious coffee. We ask the name of the coffee so that we can take some home. Alice brings out a bag to show us

Take a look at their slogan. “I’ll pluck your cherry if you’ll grind my bean”

A catchy advertising line if there ever was one.

It revives us all

1 Response to Will Colette Find A Man?