Is There Such A Thing As Too Much Makeup?

Breakfast is served from 7am

Alice has been there for an hour getting everything ready for us.

After breakfast we climb on board the bus with Alice and set off to see her home.

She tells us how fortunate she is to have a home close to the road. There are so few roads and most villages and plots of land are miles from the nearest transport. Our two male guides can not come with us. This is land owned by women and men not allowed in.

It is just a five minute walk up and over a small hill, before we arrive at her entry gate:

Once inside we see several acres surrounded by the usual dirt wall. There are two huts amongst some rather overgrown fields, and well planted gardens.

It is a beautiful spot and we tell Alice so.

We walk over to the fields where her aunt is planting sweet potatoes.

She digs and plants with gusto getting a huge amount done in the few minutes we talk to her.

We want to take her home with us. We have a family of Mexicans who tend our garden and we thought they were great until now.

She is accompanied by one of the two treasured pigs

We then go back to the hut to meet the rest of her family. 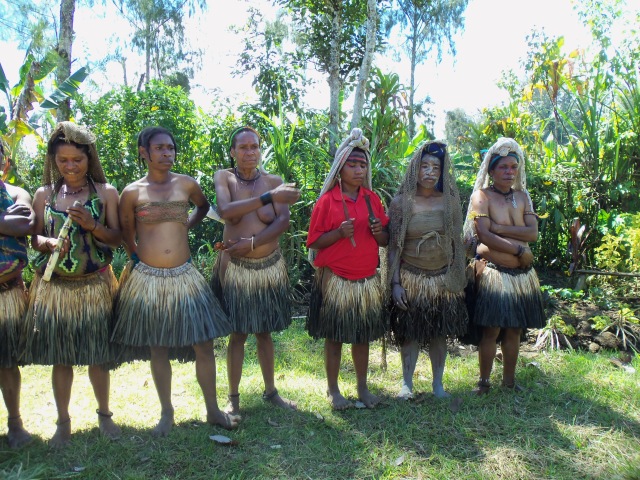 Two of the women are working.

One is making yarn out of bamboo stalks while the other is making a pig leash. One end of the leash is attached to a stake in the ground, while the other goes around the pig’s leg. The woman making the leash has an enormous smile and a wicked twinkle in her eye. She is easily recognisable as Alice’s sister. She casts the leash in the direction of my foot and laughs. I ask if she uses the leash on her husband. She laughs again, and with a knowing look explains that her husband only has one wife and she has no trouble keeping him to herself. My kind of girl.

After a pause and another look, she adds that just to be on the safe side she also went to the fortune teller and had her cast a spell on her husband to keep him faithful. An extra bit of insurance can never hurt. Definitely my kind of girl.

We stay talking to the women for an hour or so, and have many laughs with them. We visit many villages and families during our time in PNG and this is definitely the happiest.

We tell Alice this, and she beams once more.

She is quite a woman. 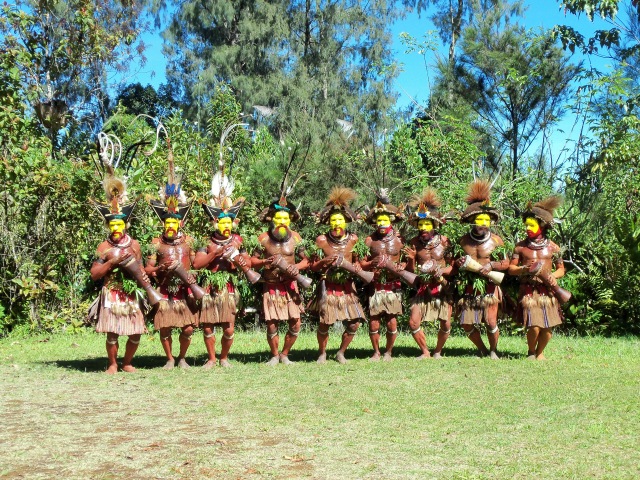 They have become an instantly recognisable symbol of the PNG tribes because our tour company uses a photograph of one of them on all their brochures and advertising. A group of them are practicing their dance for an upcoming Sing Sing and we have been invited to see them. When we get there, they are still painting their faces and getting their costumes ready. But this time we are free to watch them. They help paint each other’s faces and have small bits of broken mirror to check the results. 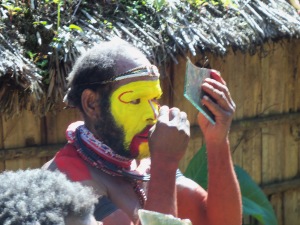 They paint their faces bright yellow with red and black accents. It is incredibly striking and the colours are extremely vibrant. It is hard to believe that both the yellow and the red come from different clays found in the region.

The Huli men are incredibly proud of how they look, and rightly so. They love to have their photographs taken and want to see the results. They can spend minutes looking at their photograph on the camera screen.

They are quite happy for us to watch and take photos as they get ready. They play to their audience and to the Fabulosity Meter which is purring along nicely

It’s just like being back stage at a drag show, but far more fabulous.And just like a drag show, someone should be asking “ Have I over done the makeup?” Do you think?

Their costumes are small but elaborate. Covering those bits that must be covered is a small apron adorned with pigs tails. The number of tails attests to the wealthiness of the individual. Who needs a black American Express card when a handful of pigs’ tails will do. I am not sure what the size of the apron attests to.

Over their backsides they have an artfully placed screen of leaves. These go by the lyrical and extremely apt name of “arse grasses”. 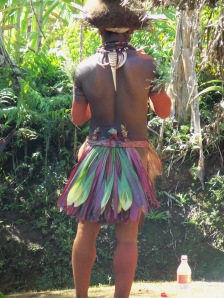 It’s a look, but not one for me

They wear several necklaces, the most impressive of which has the adornments hanging down their back

The central piece is the bill from a hornbill and the outside pieces are pigs tusks. Now I could see myself in one of those

A long reed or slim bamboo is pushed through a hole in their septum. No drag queen would go that far for her look.

Around their waist they wear a wide belt. Apparently this helps them from feeling ill when they are dancing. They do a lot of jumping up and down and the belt holds the inside of their stomach in place. It looks as if the outside of some stomachs need the same sort of help.

Into the back of the belt they fix what looks like a small bush to give them the appearance of having a tail. And I am here to tell you that they sure know how to shake that tail as you will see. 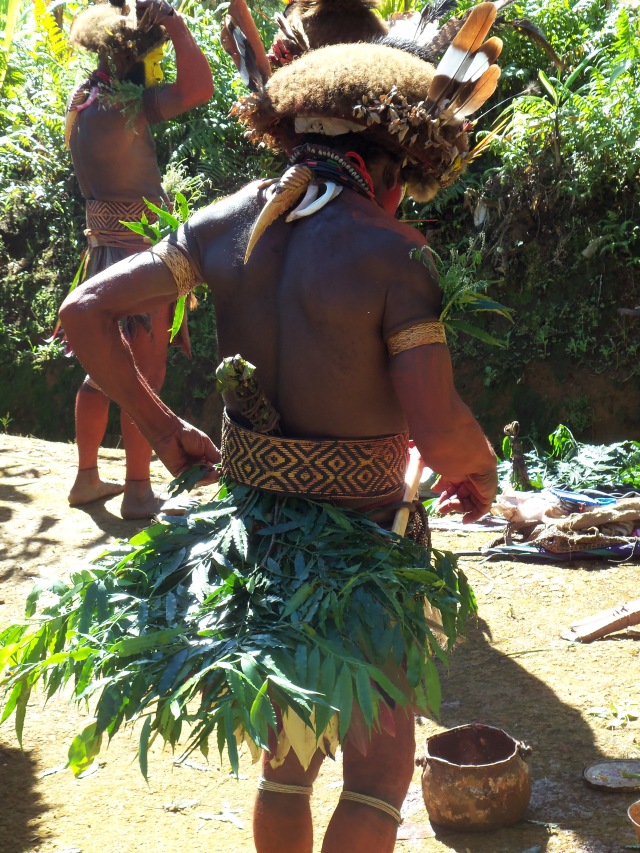 But the headdress is quite literally their crowning glory.

First there is the wig. The elders in the village have a ceremonial wig in the shape of a Spanish galleon in full sail.

These are the bigwigs of their village. Oops, sorry. I couldn’t resist. The Ed will comment here that I should have. (Ed:I’d comment but I’m deafened by the groans)

The lesser men have the usual upturned basin do that we saw at the Wigmen school yesterday. The wig is then crowned with a head dress, which is quite startling in its size and complexity.

It is, rather sadly, made of parakeet feathers and bird of paradise feathers, and even entire birds

I know where I am shopping for the next hat party

And so does Colette, who has found herself a little headress of feathers that makes the perfect fascinator. Princess Beatrice, eat your heart out. 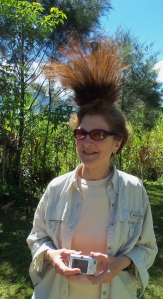 Finally the men have primped and preened enough. They look and are fabulous. Forget Alice’s Aunt and the garden, it’s one of these that I want to take home.

We are asked to go into the garden where they will be doing their dance. The men then follow us in.

I love it when a handsome man in a tiny skirt follows me, even if he is wearing too much makeup.

There is a long bench for us to sit on. It is made of a rough and rather slim piece of wood supported by two small wooden uprights.

I sit down. There is a large cracking sound and I collapse onto the ground with the splintered wood all around me. The macho dancers collapse into helpless laughter.

Great! Once more I am the entertainment, and once more I am being laughed at. Definitely not good for the image.

The Fabulosity Meter is back in full force. It is the most amazing spectacle and hard to believe that I am sitting in the wilds of Papua New Guinea watching it:

Click here to Watch them Hulis shake a tail feather

Watch them swish that tail. That takes practice.

They dance for quite some time in short repetitive pieces. All the men are extremely proud. They flex their muscles and preen as they dance. That is all the men but one. There is a young man on the end who seems totally bored if not embarrassed by the entire proceedings. The look on his face shows that he can’t believe he is having to do this in front of five elderly tourists (well four and Roger) and their cameras.

After the dancing has finished we stop and talk to the men.

They are all anxious to have their photograph taken. When the camera points their way they pump themselves up and strike a pose. Arnold Schwarzenegger would be envious. There again, he probably has more pressing issues on his mind at the moment.

All except the young man. His body language says it all

He may not be enjoying himself but the Fearless Five are having a fabulous time.

Like Loading...
This entry was posted in Papua New Guinea, PNG and tagged Alice, hulis. Bookmark the permalink.

3 Responses to Is There Such A Thing As Too Much Makeup?