The Not So Fearless Five

The next morning we find the Septic Tank is moored on the river below the Karawari Lodge. We have made it back on schedule despite the late start. We make our way to the Karawari airstrip where Kevin is once more waiting for us. It’s been three days since our last flight but he has survived them.

We are flying back to Mount Hagan but have to make a stop at Ambua to drop off Edward and Diana , Richard and Lois and Jennifer. As Kevin can only take eight passengers, Collette and Nellie went earlier and now Kevin has returned to take the remaning eight of us. We clamber on board and it seems a little crowded but Kevin tells us it has been a perfect flying day so far, and it certainly looks it as we take off towards the mountains that separate us from Ambua. But the weather changes alarmingly quickly and within twenty minutes the highlands of Ambua are completely socked in by thick cloud. 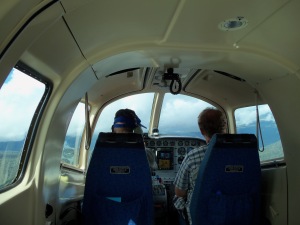 There is no control tower to talk us in. We are in the hands of Kevin which we all know are wrinkled, thin and old and at this moment are grimly clutching the joy stick.  The noise of the plane prevents Kevin from communicating with us, but after a while it is apparent that he is circling the clouds trying to find a way down. Roger is in the co-pilot’s seat, and he makes a point of not turning round to look at us, but we can all sense the stiffening of his body as the flight goes on, and on. After an hour we begin to recognise views from earlier and we realise we have circled the mountain at least once. Every so often Kevin spots a small break in the clouds and dives into it, only to be rebuffed as the clouds close in once again. We can’t see the nose of the plane, let alone the mountain that we all know is just ahead of us. Kevin turns the plane around and we are back in clearer skies.

But he can’t get us out of the turbulence which seems to be getting worse. The plane is being shaken quite violently as if we were some plaything in a giant’s hand. We hit a pocket of air and drop dramatically as if the giant has got tired of his game and let us go.

We are all getting nervous, but Diana is really starting to lose it. She has turned a shade of white that is not usually found in nature. She is responsible for charting the course when they are on their ship, and so has some knowledge of the many dials we can all see at the front of the plane. A little knowledge is a dangerous thing, and the little knowledge she has is making her extremely nervous. It’s not helping the rest of us either. The atmosphere in the plane is extremely tense

It gets worse when a red like starts blinking on the control panel. We can all read the sign over the red light. It says “fuel gauge”.

I can see two fuel gauge’s and only one is blinking. Are there two separate fuel tanks or is that too much to hope for? By this time we are all looking straight ahead, clutching the arms of our seat and trying to affect a nonchalant manner. This is quite difficult to do while you are clenching the cheeks of your bum tightly together in an effort to hold everything in.

Meanwhile, Jennifer, who is sitting directly behind me, has started to sing to herself. It’s extremely unnerving but at least she isn’t singing hymns.

Kevin makes one more dive into a break in the clouds. This time the break holds and after a few moments the side of the mountain looms directly up ahead of us. It is alarmingly close. But the only clear passageway seems to be right next to the side of the mountain. A hundred feet out and the cloud is thick again.. Kevin flies along the the edge of the mountain and at times the tip of the right wing seems to brush the trees. Our natural response is to lean to the left which we all do. Jennifer’s response is to sing even louder. Roger is leaning so far to the left he is almost sitting on Kevin’s lap.

Finally up ahead we see the Ambua Airstrip. For those of you who were paying attention many blogs ago, you will remember that this is the airstrip that runs up hill, and Kevin has to almost stall when he approaches it. But if Kevin were to take the normal approach to it today, he would have to go back into the clouds. His only option is to turn immediately into it.

He does, and we hit the runway with alarming force. But we are down, and we are safe.

As we taxi to a standstill we all applaud Kevin who turns round and gives a little shrug.

It’s all in a days work to him.

It hasn’t aged him a bit. At this moment he looks younger than any of us.

Edward, Diana, Richard ,Lois and Jennifer get to stay at Ambua. The fearless three however have to fly on to Mt Hagan and we are feeling anything but fearless as we get back on the plane with Kevin. Kevin doesn’t help when he tells us that our route takes us through a pass between two mountains and it can sometimes be bumpy. If only there was a flight attendant serving bubbly, then maybe I would feel better. But in the end bubbles aren’t needed as the flight is uneventful and we land safely in Mount Hagan.

We have to make the drive up to Rondon Ridge again as we will be staying another two nights there.

When we arrive we find Nellie and Collette plus a tour group of eighteen already ensconced in the bar. It seems such an intrusion as we have always had the Lodges to ourselves on our trip. It is made worse by the fact the group has an extremley boisterous tour guide from Australia with a grating accent and a voice that could shatter glass at a hundred feet. They are with Asia Pacific and have just arrived in PNG. Patricia, the guide, is giving them a general introduction to PNG, while bouncing up and down on the balls of her feet. She seems a little high energy for her group whose average age seems to be well into the seventies.

Patricia squeals with delight as we enter the hotel

“Oh look, young people” she giggles. So you can tell how old her group is.

“Do come and join us” she insists, as she pulls up five more chairs with one sweep of her arm

We all look horrified. We are so used to our own company and not having to deal with anyone else, that the prospect of Patricia, and 18 octogenarians is terrifying .

The 18 septuagenarians seem relieved. Patricia belongs to them. They paid for her and they are not going to share her Patricia has other ideas. She bounces over to us, envelopes me in her arms and clasps me to her rather small bosom as she introduces herself. A shake of hands would have been quite sufficient.

She attempts to do the same with Roger who recoils in horror.

We hurry off to the furthest corner of the Lodge and notice that one long table has been set for dinner.

We have a quiet word with the Manager and say that we would rather sit on our own and could he make a separate table of five. He gives us a knowing look and says he quite understands.

Dinner is a buffet, and it is immediately apparent that this is not the first buffet the septuagenarians have been to. Nellie is anxious to get to the food before them, but she is not fast enough. These old people can move with amazing speed. As we approach the buffet they beat us off with a flurry of walking sticks and elbows. They pile their plates high with food and leave a few scrapings at the bottom of the pan for us to share.

As we sit at our table picking through the desultory leftovers, Patricia bounces over. Roger has taken a strong and instant dislike to her and visibly cringes. But Patricia seems oblivious and stands talking to us while rubbing Roger’s back with one hand. Roger is turning an ever brighter shade of red, and we are all waiting for the explosion that seems imminent.

Patricia leaves in the nick of time, but not before imparting the news that we are all going to be spending the day together tomorrow.

Tomorrow is the highlight and climax of our tour. We are finally going to the Sing Sing that we have heard so much about.