We are staying at the Kunja, our favourite place when we want to be near Seminyak, an upscale tourist area by the beach. The Kunja is a small hotel but with no hotel rooms. Instead it has just 19 villas, each with a completely private garden and pool. Plus it has room service. Room service includes sending a delightful Balinese man to our villa every morning to cook the breakfast of our choice in our kitchen. What could be better. When the sun shines it is heaven, when there is torrential rain for days on end, not so much.

But the rain is the least of our problems. The Kunja management wrote to us a couple of weeks before we left the States to let us know that we would be here for Nyepi, which is the Balinese New Year.

Their email went on to explain that New Years Eve (Hari Raya Nyepi) is a very sacred day when villages “exorcise” evil spirits with offerings and raucous banging of drums. Then everyone returns to their homes in the evening and prepares for Nyepi, which is a day of silence, fasting and meditation.

Hindus are expected to stay at home and refrain from all activities. No lights are allowed, no music, no sound of any kind. With the island in complete darkness, and with no activity in sight, all the demons who were attracted to Bali by the noise of the previous evening will believe the island is deserted and return to the underworld. The Balinese are lovely people and I am reluctant to point out the error in their logic – wouldn’t it be simpler to just not attract the demons in the first place?

We realise that this means nothing will be open on Nyepi but Bali is an island that lives off tourism. We write back to the Kunja to say that this sounds like a wonderful tradition – for the Balinese! But we assume that as tourists we will be able to come and go as we want and that there will at least be some restaurants open for us.

We get a polite but stern reply saying there are no exceptions and that we will not be able to leave our villa for thirty hours. We must be back in the villa no later than midnight on New Years Eve and can not leave it until sunrise the day after Nyepi. During that period special police, dressed in black shirts (a little alarming) will be preventing anyone from going on the roads or beaches. Hotels do get special dispensation to serve breakfast and dinner to their guests, but the Kunja doesn’t have a restaurant. They will be able to make us breakfast (thank God!), but that’s it. We cannot even go for a walk. We are never told what the penalty is if we are caught outside the villa, but it sounds like it might be death at the hands of the black shirted police, or at the very least life imprisonment.

We want to tell the Kunja that if they told us this when we booked, we wouldn’t have come, but then we realise that is exactly why they didn’t tell us till the last moment. But how bad can being confined to our villa be when we have a pool, a garden and the beautiful Balinese weather. Never for one moment did we consider torrential rain from morning till night. 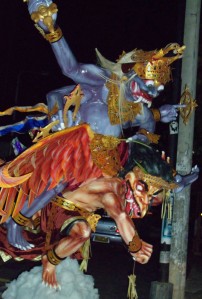 But at least New Years Eve should be fun. Wrong again. We were thinking of the western world’s version of New Years Eve. Bali’s version is very different. Once the demons have been exorcised everyone returns to their houses to prepare for Nyepi. The Kunja made no reference to the fact that little is open on New Years Eve either.

But then we are offered a little ray of hope. We are told the actual exorcism of the demons is a great spectacle and we shouldn’t miss it.  Each Banjar (a local community) makes a large effigy of a demon out of wood and papier mache. These effigies are called Ogah-Ogahs, a perfect name. On New Years Eve they are  paraded through the streets on bamboo platforms carried on the shoulders of young men and boys. The floats are spun around to confuse and draw out the demons into the open. The parade is accompanied by traditional music and the onlookers have drums, which they beat loudly. If they can’t afford drums, they use old pots or saucepans – whatever they can find to make noise. The result is fascinating – an audio and visual feast.  We are excited. This is something to look forward to.

New Years Eve is our third day in Bali. We awake as we have the previous two days to torrential rain. 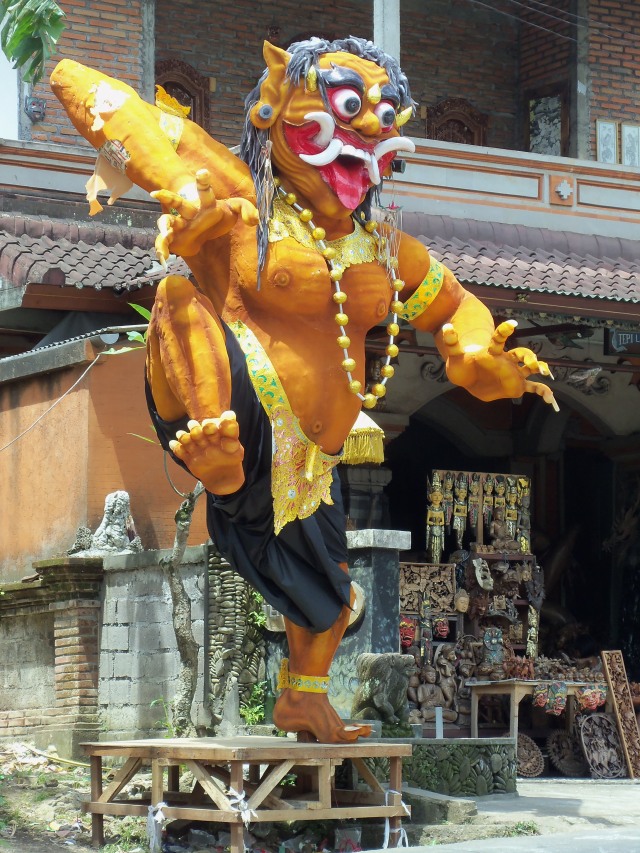 But by lunchtime the skies have cleared and it is a beautiful day. We hope this is a brand new start to the New Year. We have asked about the procession and learned that it usually starts between 5 and 6 pm at a car park by the beach. The hotel tells us not to attempt to drive there as the roads will be packed. But the starting point is just a mile away and we can walk. Meanwhile we do some research and discover that there is a very nice restaurant on the beach near where the parade starts and it is one of the few restaurants that will be open. We make a reservation for 8pm by which time we assume the parade will be over.

At 5.30 we set out. The roads are deserted which seems a little strange. As we near the starting point of the parade we can’t hear any noise, which is stranger still. When we get to the car park it is empty except for hundreds of offerings strewn across the park and beach. We learn that the sudden emergence of the sun got everyone excited and they decided to hold the procession earlier, especially as more rain was on its way. We have managed to miss the only bit of excitement happening on the island for two days.

It is now a little after 6 and there is not a soul anywhere. The only sign of life is at an occasional home where we see the family walking around their house, banging pots and pans and waving incense in an attempt to clear out their own domestic demons. Once the demons are gone, they then enter the house, close the door behind them, cover all the windows and turn off the lights. They will not emerge again until the morning after New Year

We on the other hand are wandering along deserted streets with no hope of finding anything to do to keep us occupied until our dinner reservation at 8pm. At 6.45 we are at our wits end so we head off for an early meal. But the restaurant is packed – everyone has arrived early for exactly the same reason as us. But we snag a table near the beach and enjoy a mediocre meal in a fabulous setting:

When we arrive back at the Kunja, the front desk reminds us that Nyepi is about to start and we must be very quiet. As tourists we are allowed to have one dim light on but we must close all the shutters. All local TV channels are shut off for 36 hours. We are also told that having sex is not allowed during Nyepi. We wonder how that rule is enforced and what the penalty might be, and more interestingly, why they are telling us.

We respect their traditions and do everything we can to abide by them, but there are limits. We are willing to go without sex, but not without TV so we have bought some cheap DVD’s.

The rains return later that night and stay with us throughout the day of Nyepi.

Any thoughts of getting ourselves off the island to another part of the world where the sun is shining and we can actually leave a hotel are quashed by the knowledge that all ports and the airport are closed for 36 hours. Even flights over the island are banned (just in case someone was so desperate to join in the festivities that they were planning to parachute onto the island)

Darkness arrives at 6 and we turn the dimmer switch on one lamp to low and sit in semi darkness trying to eat our meal. It is an eerie night. There are no stars, and no moon and it is absolutely pitch black. There is no noise anywhere and it is easy to understand why the demons might think the island is deserted. The only sign of life comes from one of the Kunja villas where we can see some light and hear voices talking. A little later we hear voices outside our garden wall. We quietly peer through the gate and see three policemen dressed in black from top to toe. The only thing that makes them visible in the night is the whites of their eyes. They make their way to the villa where the lights are on and order the guests to turn the lights off and to stop making a noise. It is a chilling reminder that the people of Bali are not quite as free as we like to think they are. This is supposed to be a democracy but it is beginning to feel like a police state. I am not sure whether I would rather have the demons or the black shirted police.

The next day, delighted to be able to leave our villa, we go into town where we are happy to see that some of the more extraordinary floats from New Years Eve have been placed in various spots along the roads for the people to enjoy. They are remarkable as you have seen through this story. While they all clearly look like a demons, it is obvious that different communities have different views of what a demon might look like. Most seem to be male, but then we come across this one 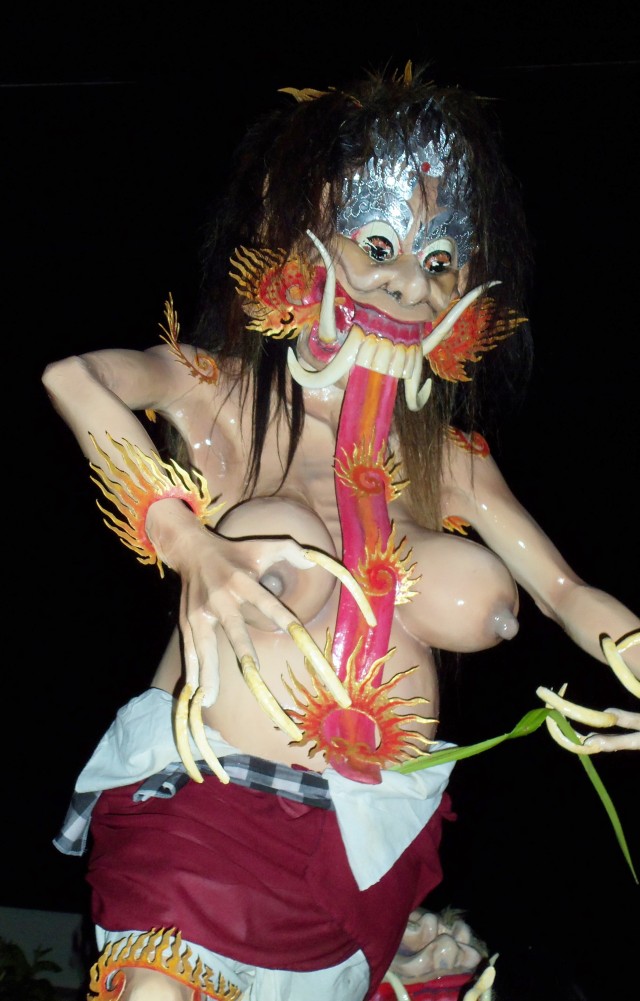 I have to say, if the demons really do have breasts like that, I too would lock myself away and turn off the lights.

Then there is this one

I can’t help but wonder who would have a demon with an endowment like that?

And who is it based on?

And where is this Banjar exactly?

And how do we get there?

2 Responses to YIPEE for NYEPI