The Australians show their true colours

“Approximately 20 minutes ago there was an earthquake in Sumatra measuring 8.6 on the Richter scale”

We all know that 8.6 is a massive earthquake and our thoughts immediately go out to the people of Sumatra. But no one really understands the significance of the announcement.

“We are approximately 1200 miles from the epicentre of that earthquake”, the Captain continues.

Well that’s a long way away. No wonder we didn’t feel anything. We’re fine, right?

“A Tsunami warning has just been issued”

OH S..T! Now he has our attention.

“It is too early yet to know whether a tsunami has been formed, but if it has it should spread across the ocean in our direction and be on us within two hours”

“Ladies and Gentlemen, I want to assure you that we are in absolutely no danger”

OH RIGHT! This is is exactly how the briefing on the pirates went. After he told us that, he went on to show pictures of the pirates with rocket launchers.

“Early tomorrow morning we are due to dock at the Maldives. A series of small islands with an average height of 4 feet above sea level. If there is a tsunami it is likely that there will be little left of these islands”

The first sound that has been heard for several minutes emits from some of the passengers. They are asking “ but we have already paid for an excursion on the Maldives. Will we get our money back?”

Others are expressing concern for the poor people who live on the islands.

I am wondering how the hell we can be safe when we are positioned between this giant wave and the Maldives.

“We are in extremely deep water where a giant tidal wave will have little effect on the surface of the water. I want to assure you all that we will not be affected should the tsunami pass us. The most we will notice is a few larger waves”

Exactly how much larger, I want to ask.

“Now if you will excuse me, I have a lot to do. I will get back to you with updates”

With that the announcement is over and 600 passengers are left to anxiously sit out the next two hours hoping that their lives will be spared.

Well, dear reader, you have probably guessed that if our end had come you would not be getting this blog. And indeed you would be right. There was no tsunami, and no change to the calm ocean. The only effect of the earthquake was that 600 passengers forgot to partake in any of the ships activities that afternoon.

That evening we spent another dinner with our new found Australian friends and their table mates. We started discussing how we had all brought alcohol on to the ship. Cruise ships make a great deal of money by selling cocktails and wine at inflated prices. Consequently they do everything in their power to prevent you from bringing your own alcohol on board. Many ships go as far as confiscating any such contraband and returning it to the offender at the end of the cruise.

Margaret and Nancy are rather fond of a nip of gin now and then. Maybe even more than a nip and even more frequently than now and then. So they wanted to smuggle some gin on board. They came up with the bright idea of filling shampoo bottles with gin. No one asked them why they had so many bottles of shampoo in their bags, they just assumed they were very clean people. It worked perfectly. But they have since discovered the downside to their bright idea. There is a slight after taste to the gin, and it tends to froth when poured from a height. They have overcome the second problem by gently pouring it down the side of the glass, as you would a beer. But the aftertaste cannot be fixed. Neither problem has stopped them from drinking.

Maybe they are not quite as classy as we had at first thought.

I think the Australian in them is starting to come out.

Passenger of the week: 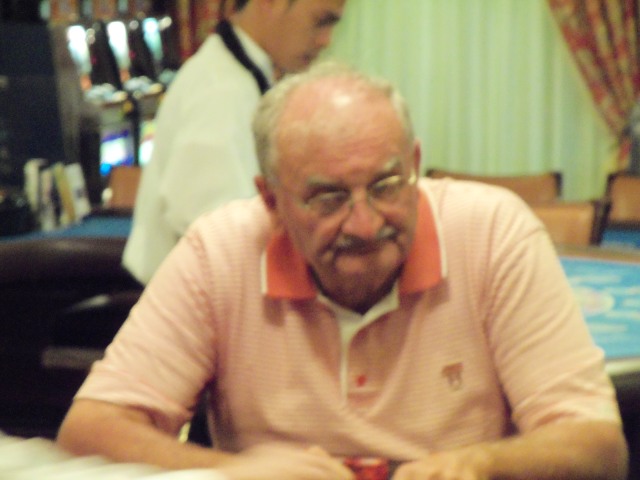 Are you having fun yet?

2 Responses to The Australians show their true colours