Rajasthan is famous for its forts.

These are not forts as we might think of them. These are huge fortress walls enclosing the Maharajah’s palace, a temple and an entire army. There are often gardens to go with the palace, vegetable gardens to feed the army as well as live animals.

The Junagarh fort at Bikaner is one of the lesser known forts but is one of the biggest and often considered to be the most beautiful. Most forts are known for their intricate sandstone carved walls. But the Bikaner fort is known for it’s incredible frescoes and decorations. Building began in the 16th century and the last additions were made in the early 1900’s

Inside the fort walls, the attraction is the Maharajah’s Palace.

The palace walls are white

But inside the rooms are covered with frescoes and ornate painting 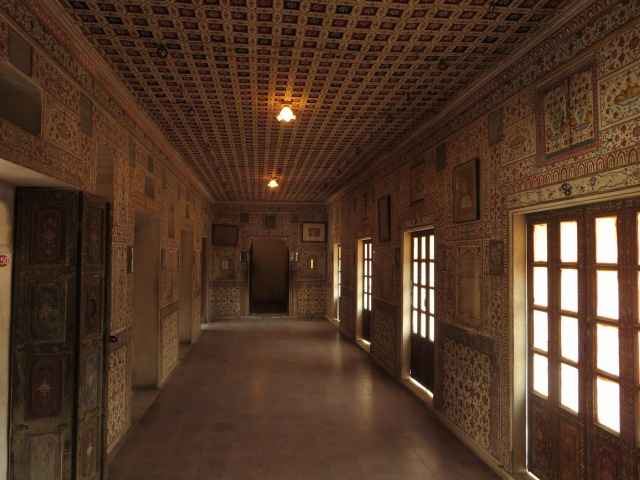 It is the only palace that features flora and fauna rather than animals and people. The walls are covered with paintings

the ceilings are painted

as are the doors

the arch above his seat is encrusted with precious stones

Then there are the shrines, the walls of which have been created with willow pattern china from England.

Vast quantities of china were purchased in England, shipped to India and then smashed into pieces to make the tiles for the shrines.

Even I find that a little excessive.

But if it’s excessive you want, nothing quite matches what is to follow.

11 Responses to The Bikaner Fort