Varanasi is one of the oldest continually inhabited cities in the world, and the oldest in India.

It is the holiest of cities in Hinduism and Jainism, and played an important role in the development of Buddhism. All of which means it is a fascinating place to see and the most spiritual city you can visit in India.

People come here and never leave. It is a bit like flower power and the Haight in the sixties in San Franciso. It has all the color, music, bells and drugs of that time, but none of the sex, which is a bit of a disappointment. But what it does have is unbelievable, indescribable squalor.

We fly to Varanasi, which means leaving Joginder behind. He is surprisingly emotional at the airport and says that we feel like family. Hardly surprising considering we have been traveling in his bedroom for a month.

Varanasi is on the banks of the Ganges and our hotel is on one of the Ghats, which are wide steps leading down to the river. The only way to get to it is by a 15 minute boat ride. The boat is like a huge old rowing boat with a machine borrowed from an ancient lawn mower which gives it just enough power to fight the current. 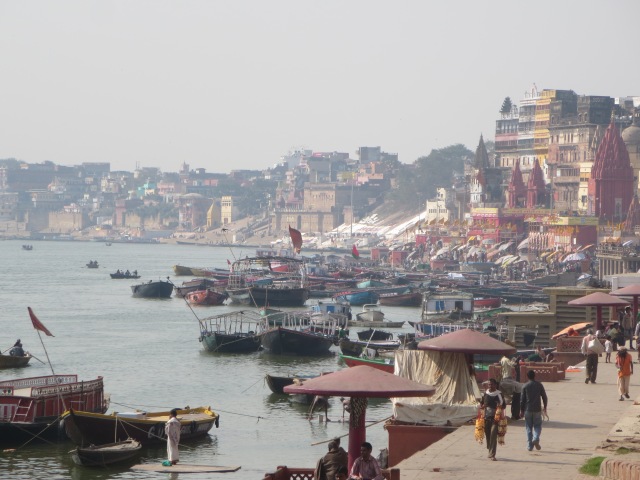 It is an incredibly romantic way to arrive, and the hotel looks perfectly suitable

But we soon discover that Varanasi is best seen from the river. Once on land we realise that despite my previous blogs, we had no idea what squalor was. Now we do. The level of filth defies all description. So does the poverty. The Ghats that line the water’s edge are full of people, many of them shoeless and in rags, some of them defecating wherever they can, then pulling at my sleeve asking for money, or worse still, trying to hold my hand in attempt to give me a massage. It seems incredibly rude to pull out my bottle of Purel, but it is absolutely necessary.

Then there are the cows, all of them defecating wherever they wish, and the dogs doing much the same but in smaller quantities. As the day gets warmer the smells get overpowering. And this is spring when it is a comparatively mild 85 degrees. In summer it get up to 120 degrees, when if the heat doesn’t keep you inside, the smells certainly will. When it becomes virtually impossible to walk on the ghats because of the amount of excrement, someone appears with a hose and washes it all into the river …… where people are bathing.

The narrow streets behind the river are centuries old and appear to have never been cleaned. They are crammed with shops, cows, dogs, colour, sound and people

and with all the detritus that causes

You can buy anything you want in those narrow streets, even meat for your evening meal

or some special delicacies

But it is the Ganges that is the life of the city. The Ganges is believed by the Hindus to be Mother India.

They believe that each and every one of them is allowed and expected to make mistakes both big and small in their lives, but if they immerse themselves in the Ganges all those mistakes will be washed away. Mistakes is such a useful word, suggesting a certain lack of intention. It sounds so much better than the sins that Catholics commit.

Blue is not a color that has ever been used to describe the Ganges. Brown, muddy green, and black are more appropriate. It is also filthy, although to be fair, a lot of what we see floating by are the flowers and other offerings thrown in by pilgrims. But to be completley fair, we also see a dead cow float by.

Much as I need my mistakes cleansed, I think I will just have to live with them. But Hindus believe that they must make a pilgrimage to the Ganges at least once in their lives to be cleansed, and indeed the City is full of these pilgrims.

It used to be both men and women who immersed themselves, but now it is mainly men. Women, as we know, rarely make mistakes. The ritual immersion must take place at dawn, when the rising sun creates a red streak across the water.

We take an early morning boat ride to watch this ceremony. 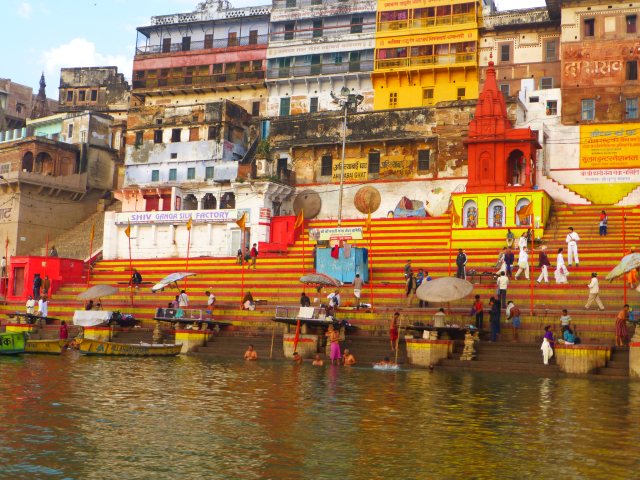 But soon the ghats are crowded with bathers 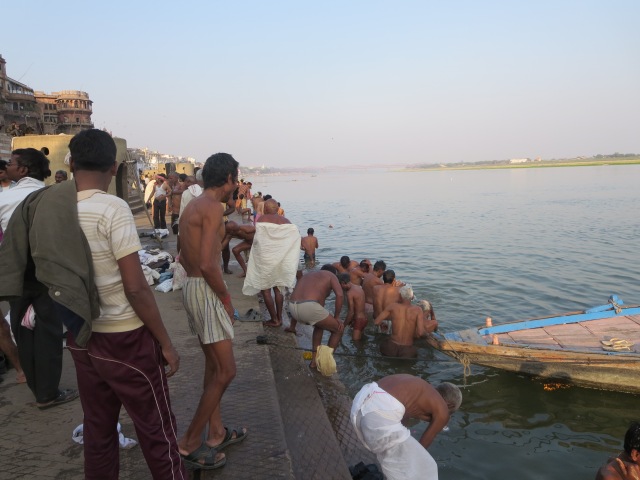 They strip to their underwear and, oblivious to the filth, disappear beneath the surface of the river. The pilgrims might only get to do this once in a lifetime, but the locals get to do it every day, which conveniently means they can be cleansed each morning before starting on the next day’s mistakes.

While they are having their mistakes washed away, they take the opportunity to wash everything else as well. They bring a handy piece of soap and wash themselves, their hair and all their body parts. They even clean their teeth using their fingers instead of a toothbrush.

Our guide tells us that the locals never use the river as a toilet, but the pilgrims often do. I sincerely doubt that the locals make that distinction. This early morning ritual is the only time when the city is quiet, and as we sit on our boat with the sun slowly rising above the horizon, there is something quite magical about the spectacle. But I am extremely grateful to be on the river rather than in it.

During the day, the Ganges takes on a more practical use. It is turned into a huge laundry.

It is apparently illegal for laundry companies to use the river, but clearly this is one more law that is never enforced. Everywhere along the banks there are huge expanses of sheets drying.

First they are washed in the river, then they are laid out to dry on the filthy Ghats. It is no wonder our bed sheets look a little grimy and come with some unpleasant stains on them. I have already turned in some of our clothes to be washed by the hotel. I don’t think I will be wearing them again.

In the evening a much more joyous celebration takes place. Once the sun goes down there is what is called a meditation ceremony where everyone gives thanks to Mother India (the Ganges or Ganga) for washing away their mistakes. But it seems to be more of a party. It used to be a small private affair, but as more and more pilgrims have made their way to the city it has grown into a huge well choreographed ceremony that takes place every night. There are thousands of people watching from the banks of the river and just as many watching from boats. Some of them are tourists but the huge majority are pilgrims from all over India. There is music, chanting, dancing, offerings and incessant bells, mostly performed by a group of monks .

The fabulosity meter is ringing loudly but can’t be heard above the surrounding noise.

2 Responses to Varanasi and Mother India