Puffin’ for the Puffins

The “to do list” in this part of Ireland is limited.

You can find a comfortable seat and people watch:

But after a while, I realise the fatal flaw in this activity. No people.

You can tour the dramatic ruins of a once fabulous home:

or you can walk across a rope bridge hundreds of feet above the sea, to a tiny island 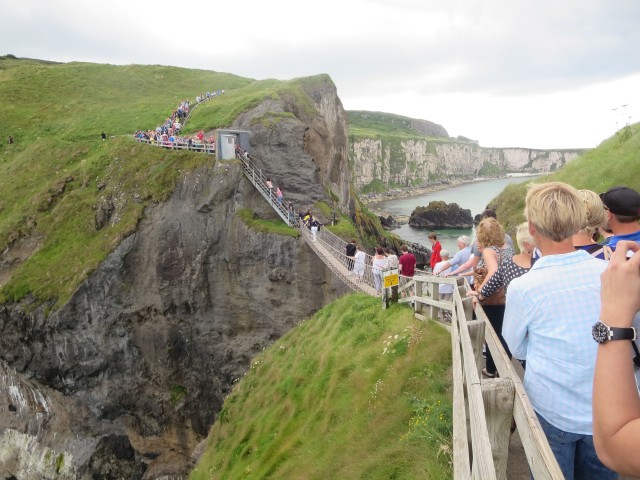 there is so little for the tourist to do that the rope bridge is the major attraction in the area. We have to queue up to cross and, rather worryingly, no one pays any attention to the warning at the bottom of the sign:

Guess which one of the of the last two attractions is cared for by the National Trust and listed as an important cultural site? I will give you a clue. It is not the fabulous ruins.

But all of these pale into insignificance compared to the one thing I have come to Northern Island to do. See the puffin breeding site off Rathlin Island. At this point I should point out that Gordon has little or no interest in seeing the puffins, but because he loves me, he agrees to do it with a smile on his face. The smile doesn’t last long.

I sense a comment from the Ed coming on……

For those of you uneducated in the world’s sea birds, the puffin is one of the strangest and cutest of them all. It looks as if a penguin, a seagull and a parrot got together for a wild night and the puffin was the result. It is a stocky little thing that waddles like a drunken penguin,

and has a large coloured beak. 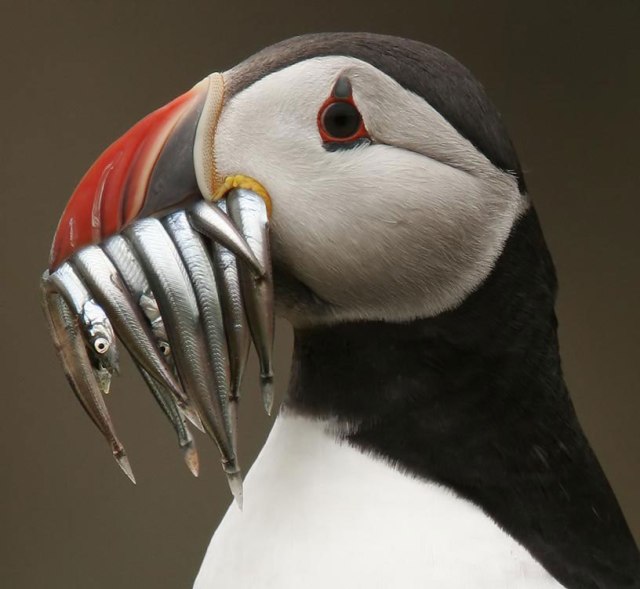 Now isn’t that the most adorable bird you have ever seen. And wouldn’t you like to see it?

The puffin breeds on a collection of giant rocks off a remote island called Rathlin twelve miles from the north coast of Ireland. It is the northern most point of Ireland and the only inhabited offshore island. It is a wild desolate place, bitterly cold and forbidding, racked by winds, rain and an angry sea. Why anyone would choose to live there is beyond me, and beyond almost everyone else other than the 75 people who actually do. I have discovered that there is a regular ferry there thanks to the number of bird watchers who want to visit. 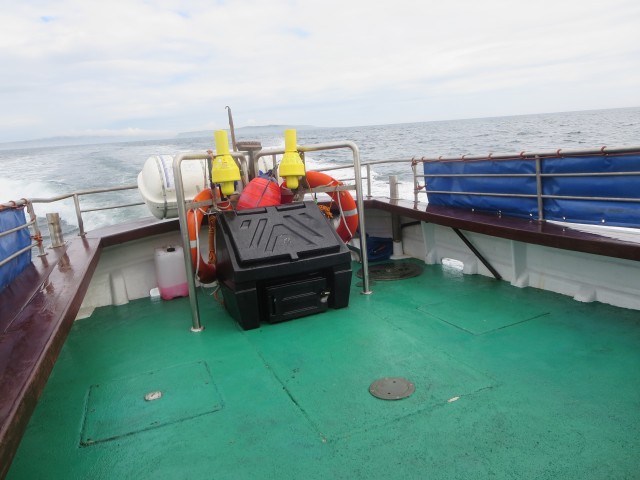 We are lucky that the day is clear and the sea fairly calm but even so no one wants to sit on the seats as the waves continually wash them with spray. Instead we all huddle in the sheltered bow. It takes twenty five minutes to get to the island. It is not a particularly welcoming sight

Gordon’s smile is fading. He gives me a look that suggests he would rather be anywhere but here.

A man by the name of Seamus (I think he made that up, for reasons we will find out later) is on the ferry wearing a bright orange vest that says “Tour the puffins’ breeding ground”. He is in his sixties with whisps of red hair on his head, many broken veins on his nose and cheeks and a large belly hiding the top of his well worn trousers. He is smiling at everyone, but doesn’t actually approach anyone. A clever ploy designed to make us approach him. It works.

He explains it is four and a half miles to the breeding grounds and that there are a couple of small buses that will be waiting dockside to take us there. He is the third option, a privately run bus that will offer a better service for less money. We ask him how much that will be and he says it changes daily depending on the mood of the other bus drivers, but whatever they are charging he will charge less.

You would think little alarm bells would be going off in our head, and maybe they are but we don’t listen to them. Instead we agree to follow him to his bus. It is an old school bus that has seen better days. The first thing he does is check that no one has slashed the tires. I am sure the alarm bells are clanging now, but do we hear them? We do not. We are too busy having fun with another couple and their 5 year old child who have also been caught in Seamus’s trap. We are in hysterics about the entire day and wondering what the hell we are doing here. None of us can stop laughing long enough to pay Seamus any attention. Seamus walks over to the other much smarter buses to find out the current rate.

He tells us that they charge anywhere from one to five Euros. We tell him we would much prefer one euro, which starts the giggles up again. We settle on two Euros, but the couple we are with ask for a half price ticket for their son. Seamus looks furious.

The five of us set off on the bus with Seamus telling us stories about the island. After a while the paved road becomes an unmade track and the going gets rough. We bounce up hills and down. When it is too late to turn back, Seamus tells us that the bird sanctuary is closed for the summer.

We stop laughing, and finally give Seamus our full attention.

Too little, too late!

The Royal Society for the Protection of Birds is rebuilding the visitor centre  and the path down to where the puffins nest, he explains. Both are closed

“Well, can we see the puffins?” we ask

Seamus replies that we can go to the top of the cliffs and look down on the puffins from there. We will have a great view of the breeding grounds, he promises.

Gordon gives me that look again.

The “road” finally stops 100 yards from a huge cliff top. Seamus tells us this is the place and points to the edge of the cliff.

We get off the bus and into a gale force wind with a chill factor of minus something.

Behind us, Seamus starts to drive off

“Where are you going?” we yell.

“Well, if I find more people I will be back, and if I don’t it is a lovely walk back to the ferry”

With that he firmly closes the door and drives off.

His last words are yelled out of the window

I can’t even look at Gordon.

We venture to the cliff edge and look down. There, hundreds of feet below, is the colony of puffins, but even with binoculars we can’t make them out: 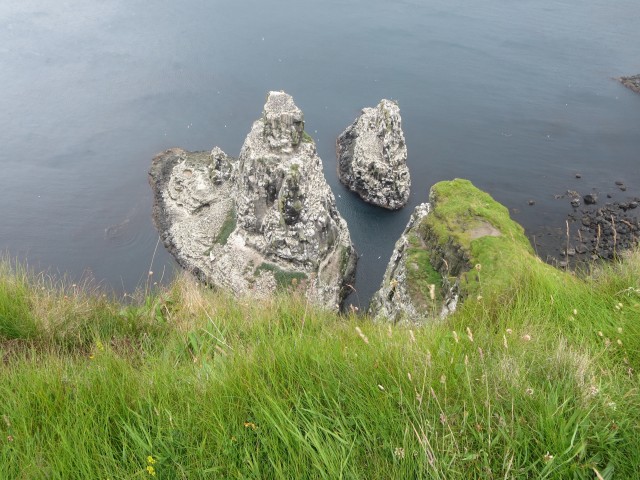 In two minutes we are done, but even before that the five year old boy is tugging at his mom’s sweatshirt and saying he wants to go home.

I move away from Gordon so that he can’t tug at mine.

We are bitterly cold, and we can’t see the puffins.

Unaccountably the giggles return and the five of us laughing uncontrollably realise we have to walk back to the ferry.

It takes at least two miles before reality sets in.

None of us is dressed for the cold, and we long for the return of Seamus.

Finally we see him coming with a bus load of people. He says he will pick us up on the way back. We have walked at least another mile before he returns, still with the same crowd of people. They were much smarter than us and refused to let him leave.

“Where did the other buses go?”

He smiles and in his best Irish brogue replies

“Oh, they took everyone to the other end of the island. There are not nearly as many puffins there, but you can get close to them”

We are no longer laughing.

But Seamus’ Irish eyes are smiling

12 Responses to Puffin’ for the Puffins