Now it is time for our drive to Mae Hong Son. The drive from Chiang Mai to Soppong was tough, but it did little to prepare us for this drive.

Much has been written about the drive from Soppong to Mae Hong Son. It is through some of the most remote and treacherous mountains in Northern Thailand. The drive is only a little over 25 miles but has over 1000 curves and is described as ‘not for the faint of heart”.

It was built by the Japanese during the second World War when they were planning to invade Burma. But if this was the road they were going to take it would be a very slow invasion indeed

As we leave Soppong we cross a narrow fertile plain completely surrounded by incredible mountains. The road is flat and straight for about half a mile, but then the fun starts.

As the road begins to claw its way upwards the hairpin bends come one after another, with a dizzying drop on one side and walls of rock and jungle on the other.

The bends are so sharp and so steep that we often have to tackle them in first gear, and we rarely get higher than third. The higher we climb, the more stunning the view.

It is the end of the dry season and the farmers slash and burn everything, polluting the air and scarring the mountain side. Sadly this causes a layer of smog everywhere, clouding the distance, and spoiling the view.

In the morning though there is often a mist  that has  the opposite effect , enhancing the view and making it quite magical.

Traffic on the road is almost non existent. We see only a handful of cars the entire way. There are some pick up trucks laden high with corn and other crops struggling up the hillside, billowing clouds of black smoke behind them, and an occasional small van serving as a bus. Other than that all we see are the ubiquitous scooters and motorbikes. The bikes come down the mountain at break neck speeds, cutting corners, engines screaming suddenly appearing round a hairpin bend coming straight at us. Those going up the mountain struggle desperately to make the steeper parts and we see many sitting by the side of the road while the driver and the bike try to cool down. There can be one two or three passengers, non of them wearing helmets. Often it is the husband driving, his wife on the back and a young child squeezed between them. The only sign of this tiny third passenger is a small brightly coloured arm sticking out between the adults .

Occasionally we pass a village. Some are built in a small valley where the farming is good.

The houses look reasonably prosperous, mainly made of wood, with corrugated metal roofs. The wealthier families have built houses of masonry topped with the latest corrugated metal roofing in a bright Mediterranean blue colour that looks striking against the green vegetation surrounding it.

Other villages are perched precariously on a mountain ridge where there can be little or no work. Here the villages are notably poorer and often belong to one of the hill tribes. Houses are cobbled together with bamboo or any available wood, and look as if a strong wind could blow them over. They have window shutters but no glass and there is not a blue roof to be seen. They are built in little rows either side of a dirt path which takes the place of a street. 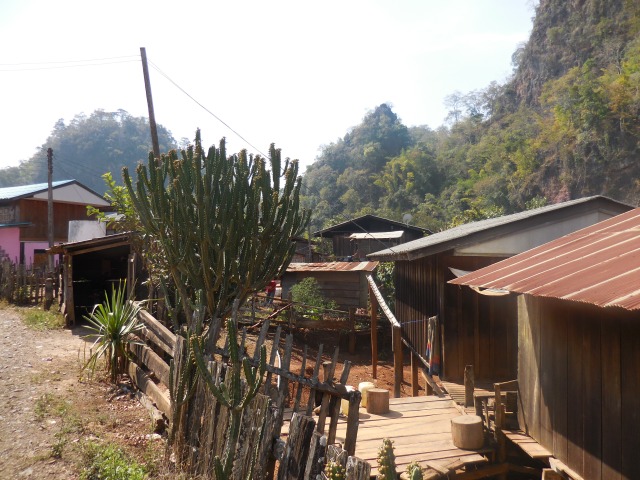 We notice two things about the villages we pass through. Firstly, no matter how poor the village, they are spotless (see above photo) When we think back to India or the African countries we have visited, or even Mexico, the poorer the village the more garbage there is strewn everywhere. The Thai people seem way more fastidious.

The other thing we notice is that all of these villages seem deserted, the only inhabitants being moth eaten dogs that lie in the middle of the street and barely raise their heads as we drive by. Of course the cynical among you might say that this is the reason there is no garbage. However it explains why we see so many motorbikes on the road , but we cannot work out where they go. Perhaps to work in the poppy fields? If that is the case, then the drug trade does not pay well when you are on the lowest rung of the totem pole.

It takes us almost 2 hours to drive the 25 miles, but finally Mae Hong Son lies before us. It is a beautiful town centered round a lake

There are some wonderful temples which clearly show the Burmese influence 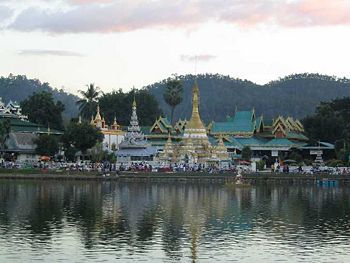 We drive round the town looking for the hotel that Gordon has chosen for us……..

I know you have been waiting for this moment.

Finally we find it handily situated at the end of the airport runway.

There is a small group of individual cabins circled round a garden that hasn’t seen a drop of water for months.

The cabins themselves look small but interesting,

They have small wooden decks off them with two deck chairs, which certainly look appealing especially when they are facing away from the airport towards some open fields. Ours however is conveniently placed right next to the car park. Our little deck looks out over a slew of rental cars. But at least they hide the view of the runway.

The deck also comes with it’s own mangey looking dog which has obviously set up home there. He refuses to leave

I of course am always willing to accept that not all hotels are equal and that I can’t always stay in a 5 star Hotel, although for the life of me I can’t understand why not. So it is with good grace that I say to Gordon

“Well it is only for one night”

But at this point I haven’t opened the door to our little hideaway.

When I do, all I can think of is the room where Hello Kitty is sent when she has been really naughty 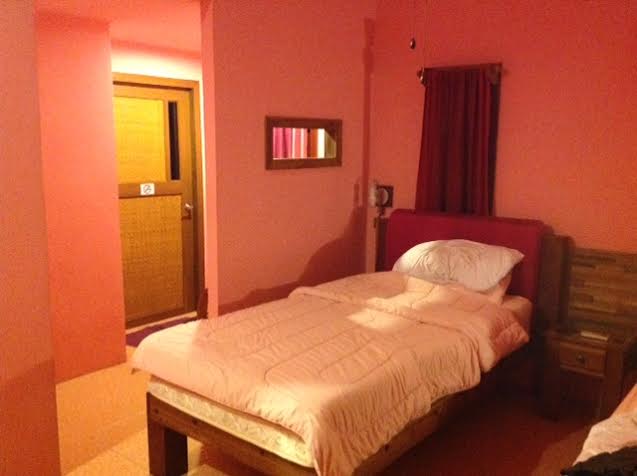 Everything is pink. And I do mean everything.  The ceiling, walls furniture, bed covers, cushions, everything is in this hideous pepto bismol shade of pink. Even the floor is done with a nasty pink tile.

The interior also takes the term “basic” to a new low.

At least I thought it did.

But I hadn’t seen the bathroom: 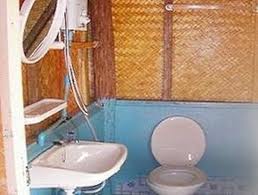 which for some reason is done in blue. Perhaps they ran out of the pink paint

Later when we get into bed, we discover that not only are the sheets pink (surprise, surprise), but they are nylon.

Perfect for the tropical heat. We slide and glide and sweat all night (not for the reason you are thinking – we are in separate beds despite specifically asking for a double). But even if we had our frette sheets, sleep would be hard to come by. The mangy dog on our deck who slept all day, suddenly wakes and barks and howls all night. We get up frequently to shoo him away, but as soon as we shut the door he lopes back and starts up all over again.

In the brief periods of repose that we manage to snatch we are both awakened by the distinct impression that there is something crawling over us. When we turn on the light, there are ants marching across the bed and us. Apparently, even the ants can’t sleep.

When morning finally comes, we go for breakfast. There is a rather charming reception area set up with tables and chairs.

But perhaps we should have realised something was wrong when we saw that this area was mainly used by the staff for parking their bicycles.

Breakfast is served buffet style.There is a flask of hot water, a plate with some tea bags and some sesame cookies in a jar. That’s it.  The cookie jar sits in a bowl full of water to stop the ants getting at them. But the ants are too busy having fun in my bed to be bothered with these cookies.

Now, dear readers, as you very well know, I am never one to complain, especially where my wonderful husband is concerned. I know that there was no way of knowing about the mangy dog. But everything else is entirely his fault. For once I had nothing to do with selecting the hotel. All of the blame rests entirely with Gordon.

But of course I would never complain to Gordon.

He is, I am sure blissfully unaware of my feelings .