KLM, Bruges and the joys of Louboutin

His KLM name tag announces he is Pieter.

The way his eyelashes and hands flutter suggests he might have a different name when on stage.

He is tall, slim and completely ditzy. The thought that our lives might be in his hands should there be an emergency is not reassuring. He may not be the perfect flight attendant, but he pours a generous glass of champagne and as an attentive waiter he is perfect.

“I’ll have the steak for dinner” I tell him

“Mmm.” He replies. And after a brief pause, he adds “Of course”

He looks at me as if making a decision.

Then, decision made, he leans in conspiratorially and quietly adds “If you are a steak lover, might I suggest that you order the chicken curry”

Which says all you need to know about Pieter and KLM

We are flying KLM based solely on the fact that it has direct flights from San Francisco to Amsterdam, and we want to go to Amsterdam. KLM is one of the world’s more established airlines, but it has no buzz. No one has ever been heard to say “Oooh! I just took a flight on KLM and it was great”

And now I know why

It strives for mediocrity and almost achieves it. It does supply us with lie flat beds and champagne, which, as you know dear readers, is all I need. But it offers no style, no excess, nothing to make the flight memorable. Other than Pieter of course.

But what it does do, is get us to Amsterdam as advertised.

In Amsterdam we pick up a rental car and drive to Bruges. It is a simple two and a half hour drive on the freeway. But we take the scenic route and it takes 4 hours. A mistake after an eleven hour flight and a nine hour time difference. Staying awake becomes a major challenge. The scenery doesn’t help. Holland and Belgium are completely flat with not even a small rise on the horizon to add visual interest. The countryside is green and lush and dotted with trees and the ugliest cows I have ever seen. They are completely white and covered in the most unsightly bulging musculature and veins. They look as if the incredible hulk had an unseemly moment of lust with a willing (hopefully) bovine mate lacking in skin pigment and good taste in its sexual partners

Bruges is breathtakingly beautiful, and spotlessly clean. The Fabulosity Meter, thankful not to be touring slums yet again, rings continually for the five days we are there.

The old town was built mainly in the 17th century and was one of the wealthiest towns in Europe. Bruges is only a few miles from Ypres, but somehow made it through both World Wars virtually unscathed, and the old town remains much as it was some 400 years ago. The streets are narrow and cobbled, some just wide enough for a car, some not, but all are lined with the the most appealing 400 year old houses. Almost every street ends in a square ringed with cafes and dominated by a church. The compact center is surrounded by canals with narrow hump back bridges restricting the traffic. Either side of the canals are narrow tree lined streets and more beautiful houses. It is absolutely charming 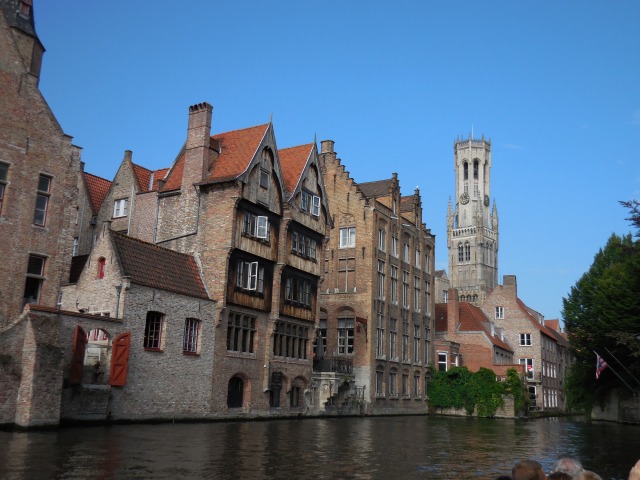 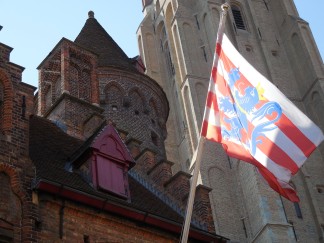 The old town is small and the terrain flat. The streets are easy to walk, but if that doesn’t appeal you can easily catch a taxi. Bruges’ taxis take the form of horse drawn carriages and can be found everywhere. The horses are immaculately cared for, as are the carriages. It is only the drivers who look old and tired.

The canals themselves are full of tour boats and swans, all gliding quietly round the town looking for a suitable spot to stop, preferably one with food and drink for the tourists and scraps for the swans

The one drawback with a place this beautiful is of course tourists. And this is August. The town is packed, but there appears to be room for everyone and tables at the many outside cafes always seem available.

It is only when you want to eat at one of the nicer restaurants that things get tricky. The town is full of eating establishments, most of them catering to tourists, and caring little about the quality of food.

Those that do care, and there are many, are usually not in the town squares and have built a reputation on quality rather than quantity. Their reward is rarely having an empty table.

Knowing this, we had made reservations long before our arrival for most of the nights of our stay.

There is a Michelin three star restaurant called De Karmeliet but their prices are richer than their food. Plus they are only rated the 134th best restaurant in Bruges by Trip Advisor. They of course eschew any mention of Trip Advisor, ignoring critiques by mere tourists and preferring to fill their tables with the wealthy elite who wouldn’t dream of looking at Trip Advisor for any recommendations.

However much the Fabulosity Meter would like me to be, I am not a member of the wealthy elite, so I am more than happy to have scored a table at Park Restaurant, the number one restaurant on Trip Advisor, that suffers from a complete lack of Michelin stars

It does however provide us with a wonderful evening. The food is excellent, the service impeccable and the setting romantic with just the right touch of class that prevents it from becoming pretentious.

As soon as we walk through the door, we know will be well looked after. The manager greets us and takes us to our table in one of the three small but elegant dining rooms

We are seated between two couples. The tables are not close.

We are rather surprised when the wife of the couple to our left promptly leans across the divide and introduces herself and husband as Susan and Andy. This sort of behaviour is expected if not totally acceptable on a cruise ship, or perhaps if the couple in question is American. But Susan and Andy are well off, well dressed middle class English behaving in a way that most English people would not approve of.

Not to be left out, the younger couple to our right introduce themselves as Brian and Christine. We are beginning to feel like we are in some ghastly Holiday club and should be wearing name tags. No wonder De Karmeliet doesn’t want to know Trip Advisor readers.

Both couples have their tables liberally sprinkled with rose petals. The restaurant knows they are celebrating anniversaries

Our table has nothing.

When we comment on our bare white table cloth both neighbours volunteer to share their rose petals with us, and soon we are elbow deep in red petals.

Brian and Christine, despite their names which sound like something out of an 80’s English soap opera, prove to be lively and fun dining companions. Andy and Susan, not so much

We are immediately attracted by Christine’s foot, a strange attraction to have when in a nice restaurant. But there is a good reason for it. She sits crossed legged throughout the evening with one foot pushed out from under the long white table cloth. The foot is in constant motion, bouncing up and down and doing little twirls. We soon realise that this is practiced behaviour designed to make us fully aware of her incredibly high heeled shoe perfectly finished with a red sole: 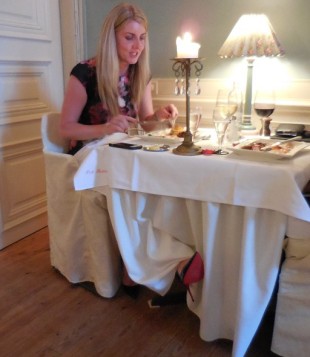 Fortunately for Christine she is sitting next to two gay men who immediately realise the significance of what jiggles before them. We don’t know what to think of Christine and her anything but subtle ways, but being nothing if not polite, we make the appropriate comment

“Oh, you are wearing Christian Louboutin” we comment “ what fabulous shoes”

“I can’t believe you noticed” she replies

If the conversation had stopped there we might have come away with a completely different impression of Christine. But the conversation, much to our delight, has only just started.

Christine goes on to explain that she has always dreamed of owning a pair of Louboutin shoes and when she came into a small inheritance she blew it all on her dream. They are however , she continues, the most uncomfortable pair of shoes she has ever owned .

“I had to walk to the restaurant in my flip flops” she explains “ and then I just changed into my Louboutin’s round the corner from the entrance” .

We can’t help but love her, and even the Fabulosity Meter gives her a high five.

Brian is also a delight. A good strong Irishman who would look more at home in a pub than in a fancy restaurant. He is in his early forties with a shaved head and a muscular body poured into a very tight crisp blue shirt and slim dark trousers. He has an Iphone and Ipad on the table next to him and an Apple watch on his wrist. He looks as if he has been hand picked by Apple for their ad campaign. He is as proud of his watch as she is of her shoes. As soon as we have finished admiring Christine’s shoes he is showing off his watch and introducing us to Siri. Christine gave him the watch for his birthday, he explains and he was thrilled.

This statement is met with shrieks of giggles from Christine. She explains that for months he had been dropping hints that all he wanted for his birthday was the Apple watch. In the end, desperately worried that Christine would not come through, he bought and paid for the Apple watch himself on line. He ordered it gift wrapped with a card saying “to Brian with love from Christine,” and had it shipped to Christine, so that she could present it to him on his birthday. Presumably he looked suitably surprised when he opened the gift.

Brian is clearly not without a romantic side. The trip to Bruges is to celebrate their 5th anniversary and Brian had carefully booked the restaurant weeks before as a surprise gift for Christine on their anniversary night. A wonderful gesture that is not unappreciated by Christine, but she can not stop herself from pointing out that it would have been so much better if he had got the date right! Tonight is not their anniversary – tomorrow is.

And to make matters worse Brian had justifiably felt that after this wonderful gesture he could at least book a restaurant that he wanted to go to the next night. So on their actual anniversary he would be taking Christine to an all you can eat and drink, ribs and beer place. We suggest that the Louboutin Shoes might not be the correct accessory for tomorrow.

We feel the same way about the restaurant as we do about Bruges.

And if you don’t believe me then please take note of the sign that lights up the central square.

10 Responses to KLM, Bruges and the joys of Louboutin