Our driver and his bedroom. Where they go, we go

We are touring Tamil Nadu which is the state at the southern and eastern tip of India. We have only been here a couple of days but we can already tell this is not going to be quite the adventure that touring Rajasthan was. This is a more prosperous area of India and the roads are better. If you were one of the many that were put off going to India by my previous blog, what follows might sound encouraging. But don’t make any rash decisions yet, poverty, cow dung and filth will unfortunately make an appearance soon.

And while I am in a positive mood, I should mention our driver. Many of you remember fondly (not quite the right word) Joginder and his bedroom in which we travelled around Rajasthan and I know you have been anxiously waiting to hear about our driver on this trip.

His name is Ragu, and like the sauce of the same name, he is a rather hearty mix of beef and spices.

Just like Joginder he too sleeps in his car, but there all similarities cease. Ragu wears a crisp white shirt with perfect creases and no wrinkles. How is that possible when he spends his life in a car? His car too is immaculate, the seats are covered in pristine white cotton covers tailored to fit perfectly. On top of those are white towels beautifuly laundered and stretched over the seats, presumably there to absorb our sweat – a thoughtful touch that hints of an unpleasant journey. He even has flowers to brighten the interior.

The only sign that this might be Ragu’s bedroom is behind us in the back of the SUV. There we spot a single wooden hanger with a towel folded neatly over it dangling from the back seat. Tucked away in a corner is a small plastic bucket in an alarming shade of green that appears to hold some items of personal hygene, a small bag of washing powder and a fan that will plug into the cigarette lighter. He also has wifi in the car which we are free to use, and a phone the size of a small tablet. This is a neat and tidy bedroom with all mod cons (well actually there is one rather necessary mod con that is missing, but we try not to think about that). Ragu is clearly going to be a big improvement on Joginder, but nowhere near as entertaining. Our only hope comes from the two serious scars that slash across his face.

They suggest an interesting past and one which we hope doesn’t catch up with him during the next month.

Our first stop is Pondicherry, a seaside resort on the Indian Ocean surviving mainly on local tourism. We were looking for somewhere to relax after our long flight and the thought of a beautiful beach and a fishing fleet sounded perfect. Unfortunately Pondicherry has neither. We had read that the town was famed for its long sandy beach but we must have had a very old guide book. It turns out that in a decision out Trumping anything the Orange One might do, the town decided that what it needed was a breakwater to protect its lovely beach. In 1989 they built it just south of town. It did not do well. In a very short period of time the beach was completely eroded and all there is now is a huge sea wall built of rock which has to be replaced annually as the waves beat against it continually. 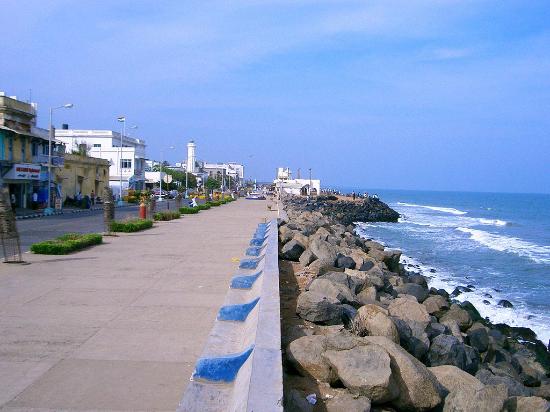 And then there is the fishing fleet. We were told by a professional photographer that we mustn’t miss the sight of the large and colorful fishing fleet setting out to sea at dawn. We have no intention of watching anything at dawn, but we thought the idea sounded great, to say nothing of the fresh fish we could eat every day. But in a strange twist of fate the fishermen are on strike. What do fishermen go on strike for? More fish?

But fortunately Pondicherry has much more to offer. It’s main attraction is that it was a French territory until 1962 and still has many French inhabitants, businesses, cafes and restaurants. The French people might not be a plus, but the food, coffee and bread most certainly are. Pondicherry also has the famed Sri Aurobindo Ashram which attracts many foreigners, giving this sleepy backwater a particular multicultural flavor that separates it from the rest of the country. The town appears isolated from the industrial development elsewhere and seems to be more liberal and open minded, a fact that is born out by the easy accesibility and affordable prices of alcohol. While much of the south frowns on the consumption of alcohol and taxes it heavily, Pondicherry does neither. Are you bginning to see its appeal?

The French Quarter, or old town, is charming with its narrow tree lined streets and french colonial architecture.

But it struggles to survive. Many of the attractive French houses are loosing the battle with the damp humid climate of sub tropical India giving the area a sense and scent of decay.

Tourists are mainly Indians coming for the weekend from the nearby cities, but they are noticably hipper and more bohemian than the average Indian. They are drawn here, not just by the cheap alcohol, but by the different lifestyle that Pondicherry offers. And Pondicherry is noticing this. There are signs the town is slowly waking up. Stylish fusion restaurants are opening, design shops are starting to appear and a few modern steel and glass structures are being built. Then there are the old French Colonial Mansions some of which are being returned to their former glory while others are being turned into boutique hotels. We are staying in one that has just 6 bedrooms all done in sleek minimalism offering perhaps more style than comfort, but it is quite fabulous. The severity of the minimalist approach is offset by a great sense of whimsy

It is pouring with rain, and continues to rain for our entire stay. Something that is not supposed to happen in January, or February for that matter. But global warming is throwing the gauntlet down, determined to undermine the proclamations of the Orange One.

Umbrellas at the ready, we set out to explore the few sites the town has to offer. But the main one is a show stopper. It’s name alone is worthy of note and demands considerable typing skills. The Arulmigu Manakula Vinayagar Temple is a place of worship adorned as only the Indians can do, in fantastically colorful representations of Lord Ganesh.

Notice her adorable ankle bracelets. The fabulosity meter can’t decide whether it should ring out in appreciation of this wonderful creature, or weep in shame for its treatment. She , I am sure it is a she for reasons we won’t go into, stands in a tiny sand pit hardly big enough to contain her, swaying from side to side and begging for food and money. If you offer her some food (readily available – at a price – at the half dozen stalls handily located a few steps away) the elephant will bless you by wiping her snotty trunk all over your head. Many Indian tourists seem to think this is wonderful, but I decided it was one blessing I could live without. Later in the day the elephant is led inside the temple to pray (really). But as we already know what the poor elephant would be praying for we decided not to wait.

What bothered me most was the thought that this wonderful creature had to stand in that little sand pit all day, but we were relieved to see her a little later wandering down the street for her lunch break

This evening we head down to the promenade where half of the towns  inhabitants and most of the tourists join us for the evening, We have already discovered that the promenade is the place to be in the evening. It is lit in garish lights that change color every minute and at weekends there is usually a free concert. Tonight however there is an Antique Car rally.

There are dozens of antique cars, mostly British and not really antiques, lined up in an orderly fashion along the sea front. Portable metal fences are there to keep the cars safe from over enthusiastic viewers, but this being India, the barricades are quickly moved by the people and everyone swarms round the cars:

The car owners watch helplessly as sticky hands leave nasty prints on the paintwork, children climb on the cars while their proud parents take photos and car enthusiasts open the drivers door and climb in. It is chaos, but a lot of fun

I spot a Morris Minor convertible, the first car I ever owned and am looking at it wistfully when the owner introduces himself.

I tell him that I owned one when I was young.

“How long ago was that” he innocently asks .

“Good God” he exclaims “How old ARE you!”

Like Loading...
This entry was posted in India and tagged Pondicherry, Puducherry, Tamil Nadu. Bookmark the permalink.

1 Response to Our driver and his bedroom. Where they go, we go