K.M.R.R.R.P. and his amazing temple

There are several large states in India and each state has its own language, its own personality and its people have their own look.

Tamil Nadu is full of Tamils (no surprise there) who are an incredibly friendly bunch, way more than in the north (more on that later). It has fewer tourists but those it has are mainly French who are not a friendly bunch. They come here because Pondicherry used to belong to the French and they clearly think the entire state is still theirs. They swan around oozing that superior attitude that is so peculiar to the French. The men are nearly always slim and well put together but in a way that suggests they just threw something on. They have long hair carefully styled to look as if it hasn’t seen a comb in days.  They wear unpressed linen trousers and oversized shirts, usually white,  not tucked in. The women are always stylish, with good hairstyles and scarves artfully draped round their necks. And of course they speak that beautiful language. They would be quite fabulous if they didn’t all smoke, if they weren’t so bloody rude and if they were somewhere else

Just as bad and far more prevalent are the mosquitoes. Just like the French, they are bothersome all day but at dusk they attack in droves. They are so bad that every hotel warns you to close all windows at 4pm and keep them closed until 8pm. That I can deal with, but their further advice to keep your door closed at all times for those 4 hours is impossible.  You are either a prisoner in your own room or outside it. But they are right, the moment you open the door it’s like an invasion. They buzz into the room on a search and bite mission, rarely failing in their objective. The only answer we have found is to be in the room by 4pm, with bottles of bubbles and snacks and door firmly closed. It’s a hardship, but we manage.

The tourists do not come to Tamil Nadu for the quality of the hotels or the high standard of the service in the hotels. If they did they would be disappointed.

Tourists come for the temples. They are everywhere. Every small town has at least one and the large towns have several. There are even temples in the countryside, seemingly miles from anywhere. There are so many of them that Ronald Reagan’s comments about trees comes to mind. “If you have seen one, you have seen them all”. To some extent I find that to be true. But some of them  are magnificent. They can date back to the 11th century and  many of them are still in wonderful condition, due to the fact that they were constructed out of granite which is a stone that is slow to erode

Before the constructed temples and even more astonishing, are the cave temples carved into gigantic granite rocks.

Their interiors are decorated with amazing statues that are all sculpted in to the granite cave walls.

Amazingly they remain today much as they were fifteen hundred years ago. This one dates back to the 6th century .

Many of the most impressive temples were built during the Chola Dynasty which ran from the 9th to the 13th century. The capital of the Chola Dynasty was Tanjore and it is in this area that some of the greatest temples can be found. But there are three temples that are the most important and they were built by a father, his son and his grandson. All three are still living temples where the tradition of temple worship and rituals established over 1000 years ago is still practiced daily.

The Brihadishwara Temple in Tanjore was built by the father and is without doubt the granddaddy of them all.

His name, Kunjara Mallan Raja Raja Rama Perunthachan,is almost as grand as his temple. But his wife called him Sweetie, his friends called him K.M.R.R.R.P. and his Public Relations company  called him difficult. We know he is the architect of this temple because his full name is inscribed on the wall which is one of the reasons the temple had to be so big.

This entire complex is built out of granite, which is an impressive feat in itself. The fact that the nearest source of granite was 40 miles to the west makes it even more impressive. But all of that pales compared to the task of getting the 80 ton carved granite capstone (a dome)  to sit on top of the 200 foot high temple. To do this the capstone was constructed in four separate segments each weighing 20 tons.  To get them to the top of the temple they  built a ramp of compacted earth that stretched back over a kilometre to insure the incline wasn’t too steep.

The  temple and its grounds are enclosed by walls that were built in the 16th century. These walls are in themselves remarkable. Three sides of them are cloistered 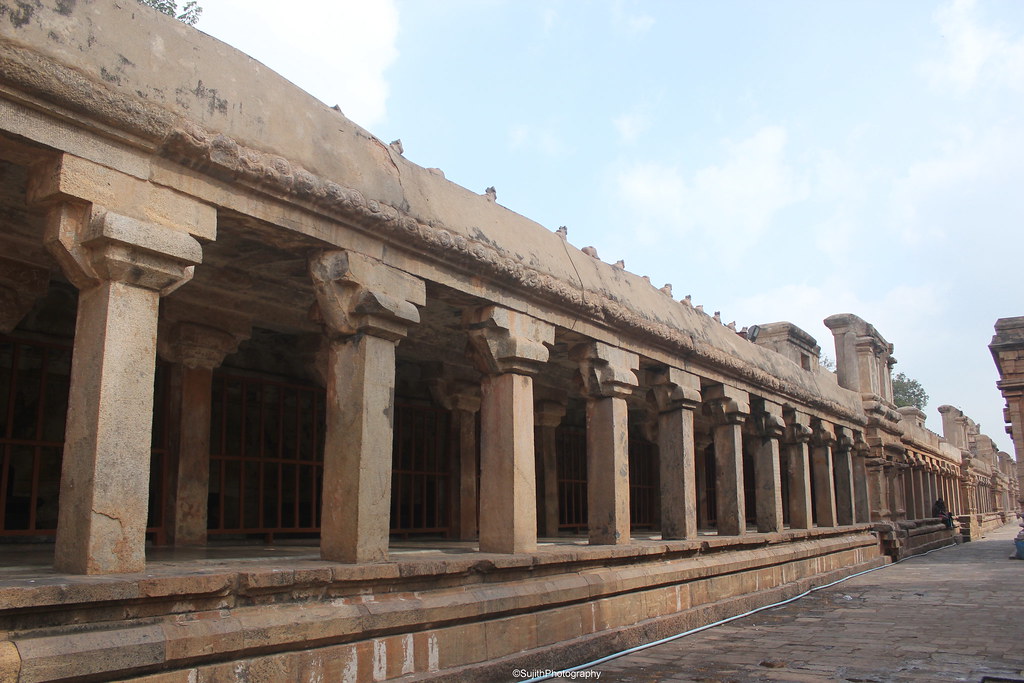 The 4th side contains the main entrance

The entire length of two of the cloistered walls is decorated with paintings which are still clearly visible today.

They were so proud of the remarkable paintings that they thought it would be a good idea to allow the public to view them unencumbered by any sort of barrier. It was not. Actually it was, until the advent of marker pens which seemed to give vandals free range to inscribe their meaningless names all over some of the paintings. The temple responded by constructing iron bars all along the colonnade. So now you view these magical paintings through what looks like prison cells.  It does nothing for the beauty of the paintings or the ambiance of the cloisters

But it is not just the paintings that make this temple so special. The carvings that cover the temple are staggering in their beauty and detail, even though they were carved out of such a hard stone as granite using only the tools of the 11th century. The temple is dedicated to Shiva. We have seen from the paintings and heard from the stories that Shiva was one busy and talented god who for some reason is portrayed here in the form of an enormous twenty nine foot lingam (perhaps another unmentioned talent). Now many people enjoy a large lingam but twenty nine feet may be taking it to extremes. There was no one to explain what this priest was doing with the lingam so I will have to leave it to your imagination.

Outside the temple facing Shiva is a big Nandi. Although it sounds as if I might be referring to a large very effeminate man, I am actually referring to this giant bull

It has been carved out of a single piece of granite. The bull itself weighs 20 tons. It is hard to imagine the man power needed to transport this enormous piece of granite 40  miles

What is especially appealing about all the living temples we visit is that they are far more than a holy place for people to pray. They also serve as the town’s park and gathering place. They are always bustling with locals who come here for the day. They bring the family and a picnic or they buy food from the local food stands and they just hang out with friends. The adults socialise while the children find something more entertaining to fill the time

The inner sanctum is reserved for prayer but the temple and its grounds are for everyone to enjoy. Maybe this explains the startling difference between the West and the East. In the western world Christianity is struggling to attract young people and churches are empty. Here in India, Hinduism thrives as part of daily life and the young are just as involved as the elders.

But as the sun sets this particular temple becomes quite magical. The granite glows a deep red color, and the people come to worship. They bring with them their offerings and place them carefully on the lawn. They then sit cross legged on the ground and meditate, pray or just chat

Even the family dog finds this a perfect place to relax

It has, after all, been a long day for everyone

2 Responses to K.M.R.R.R.P. and his amazing temple