There is a fine line between eccentric and just plain wacko. He treads that line, wavering  either side of it seemingly at random. He may well be a nice looking man, but it is hard to tell. His eyes are green and intelligent, but they show every emotion, sometimes laughing sometimes just a little wild. He hasn’t shaved for days and his stubble is flecked with grey. He is wearing a plaid shirt and tan trousers, tattered and dirty and way too big. His head is topped with a knitted hat that has assorted bird feathers sticking out of it. His movements are jerky and unexpected, suddenly rushing this way and that. He talks in staccato bursts of random thoughts, waving his arms to emphasize his points. He is loud, funny and just a little obnoxious. He is also very entertaining. He could easily be a street person, but he is not. He is a man with a mission.

Dear readers, to counter any thoughts you might have that I am exaggerating once again, I present this photo to show that I speak nothing but the truth

His name is Steve Kroschell. He is married. I wondered how on earth anyone could marry this strange man. But then I learned that he only visits her every three weeks as she lives 3500 miles away in Florida – just far enough away for it to work.  When he is not with his wife he is with his animals at his park near Haines, Alaska where he cares for mainly orphaned wildlife indigenous to Alaska . 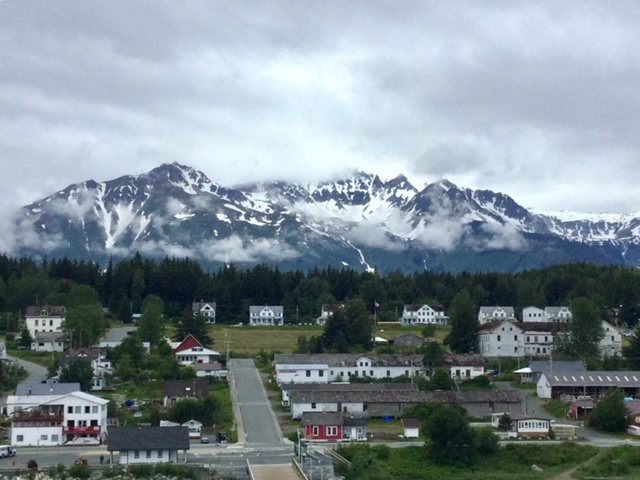 There is only one road out of Haines, and after a few days in Haines I would think you would want to take it. We have rented a car with the sole purpose of visiting The Kroschell Center. To get to it, we have to drive thirty miles out of Haines and look for a small road leading off to the right, signposted to Mosquito Lake. It is no wonder that no one visits this part of Alaska. Names lake Mud Bay and Mosquito Lake do not attract crowds. But the scenery is beautiful as the road to Mosquito Lake twists and turns through the mountains. There is no sign of life anywhere which is a little alarming, just a thick forest of pine trees and impenetrable undergrowth on both sides of the road. We assumed there would be signs to the animal center but Steve Kroschell does not do the expected. There is no sign anywhere and we almost miss the narrow path between the trees on the left of the road. The path is blocked by a gate roughly fashioned from tree branches and securely padlocked. A sign on top of the gate, painted by an unprofessional hand reads “Welcome to the Steve Kroschell Wildlife Centre”.

So far so good.

But underneath that sign are other signs. They are painted in an equally unprofessional manner on rough hewn wooden planks nailed to the gate, but their message is quite clear

“Tours by appointment only”

We are mortified. As we don’t have an appointment, there is nothing else to do but to venture on to the delights of Mosquito Lake.

It is a beautiful spot and it lifts our spirits, despite the thousands of alarmingly hungry bugs the size of killer bees that the lake has been named for. We don’t stay long.

As we drive back past the Animal Center we see a mini van pull in by the gate and ten people get out. Someone appears at the other side of the gate and opens it. We screech to a halt, jump out of the car and as casually as we can, we quietly mingle with the group as they enter. No one seems to notice. We are in!

Whatever vision we had in our mind’s eye of what a wildlife sanctuary might look like, this is not it.

Everything seems to be cobbled together with driftwood. The paths are just muddy tracks, and there are bones everywhere. There is even a bone graveyard:

and skins drying on the walls of the animal enclosures

He is a large jovial man with a ready smile and an infectious laugh.

He has all his teeth. But everything else about him suggests a typical Alaskan inhabitant. But he is anything but. His name is Mario Benassi and he is of Italian descent. A baseball cap sits on top of a mass of salt and pepper hair that reaches down to his chest and back  and seems to get tangled up in his enormous grey beard. He has a large gut on which rests a polar bear’s claw dangling from a beaded necklace. He holds his arm away from his body, and on that rests a very alert and very large hawk. 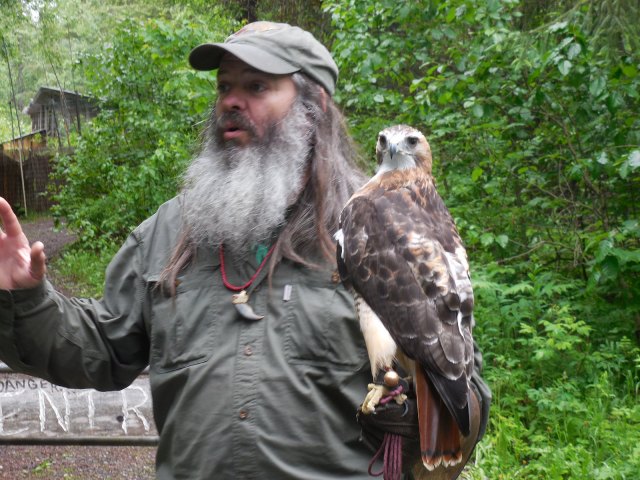 Mr Benassi is quite a character. He is a well known film maker, famous for shots of animals that no one else can seem to get. When a movie maker wants a scene involving, say wolverines hunting prey, they turn to Mr Bonassi. Twenty years ago Steve Kroschell asked him to run his wild life sanctuary and Mario readily agreed. Mario is also a falconer and we are meeting a hawk that has been rescued from the wild.

They actually go on long walks together through the forest while the hawk hunts for food, but never strays far from Mr Bonassi.

For two hours we tour this wonderful sanctuary. Mario and Steve team up together and make the perfect foil for each other. Steve’s wild and eccentric behaviour is tamed by Mario’s humour and straight forward approach. They behave like an old married couple (they are not), interrupting and verbally sparring with each other throughout the tour. They refer to each other by their last names and take it turns to introduce the next animal. It is informative and hugely entertaining.

Some of the animals we are allowed to pet. A little red fox is adorable 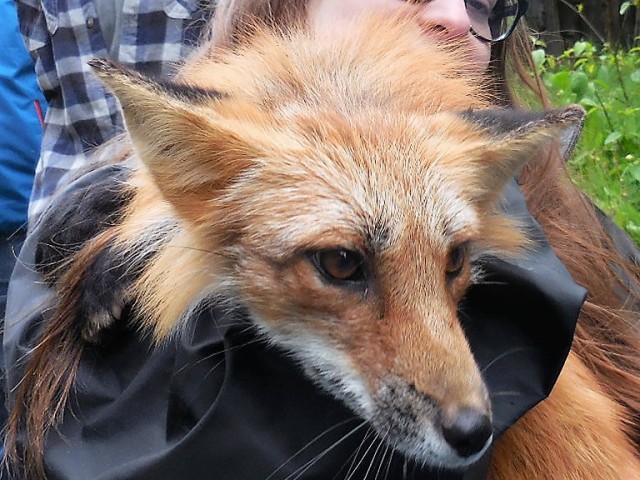 a larger black fox a little less so.

But a porcupine steals the show 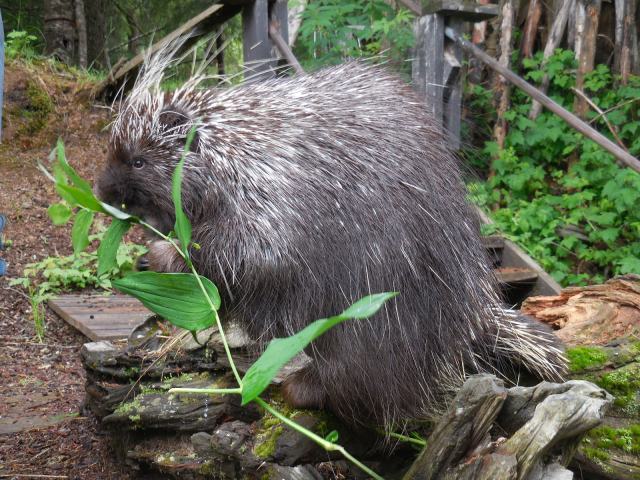 MarIo tells us that at one time he was asked to film porcupines mating, something that hadn’t been done before. The female porcupine comes into heat once a year and then only for 20 minutes, which as far as the male porcupine and Mario are concerned gives a whole new meaning to being in the right place at the right time. It also means that there is little romance and no foreplay involved, making the movie a very short one.

Mating might well be on the mind of the next animal we see. The moose seems to find me rather attractive, especially when I have a carrot in my mouth

The reindeer next door is quite shocked at this unexpected romance

However there is one animal that we are not allowed to approach and before it is brought out we are given strict instructions as to where to stand and how to behave. As the instructions are delivered, Steve straps thick protective pads onto his arms. Whatever the animal is, it has clearly already done some damage to the padding which looks to be shredded. He disappears into a walled enclosure and we can hear a lot of thrashing about interspersed with Steve cussing rather loudly. Eventually he brings out a wolverine on a leash. 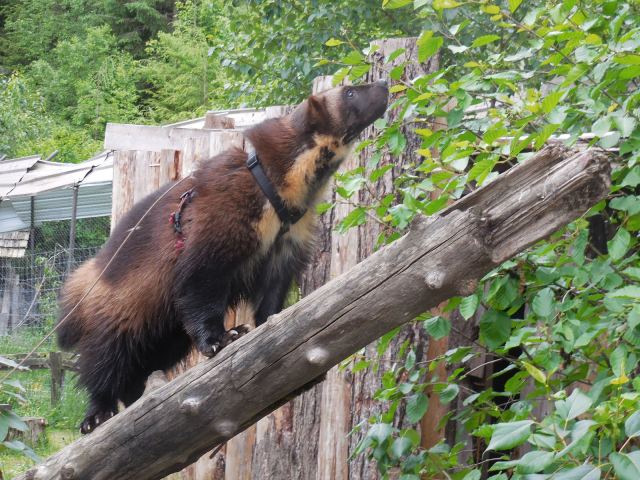 It doesn’t look that dangerous or that big but it is one of the fiercest animals known. Its jaws can crush skulls with very little effort, and it is able to kill animals many times its own size. It seems quite well behaved but at one point it attacks Steve from behind.

Steve lets out a cry and it lets go, but presumably Steve has a nasty looking bite mark that will take some explaining when his wife sees it.

There are many more fascinating animals to see, and we learn a little about each one and much more about their environment and the many threats to their very existence which we are creating.

It is this education that is Steve Kruschell’s mission in life. He is passionate about the animals and the earth on which we all live,  and he wants to save both for our future generations.

It makes for a wildly entertaining day with a sobering message.

9 Responses to A Loose Moose