The dangerous Oscar, the lovely Raidel and the faded Havana

Havana; and the Fabulosity Meter is going wild. It’s hard to know why, but there is something about this city.

It is a beautiful city with magnificent architecture which, when seen through rose tinted glasses rivals any other major city of the world. But remove the glasses and all you see is decay, crumbling architecture, garbage, stray cats , empty stores and worn out, downtrodden people.

But the city is brought alive by the music. Its rhythms set the tone, infectious, loud, and infinitely danceable. It makes the people smile while nothing else in their lives does. Everyone it seems is a musician. They play in bars, cafes, restaurants and any street corner. They don’t need instruments; two sticks, a tin can, a bottle, anything that can create a rhythm and they are off. Within minutes they have an audience. Young, old, everyone stops and joins in. Party time in Havana is wherever the music is, and the music is everywhere.

And then there are the cars. Fantastic fabulous fifties American cars. Huge finned batmobiles, 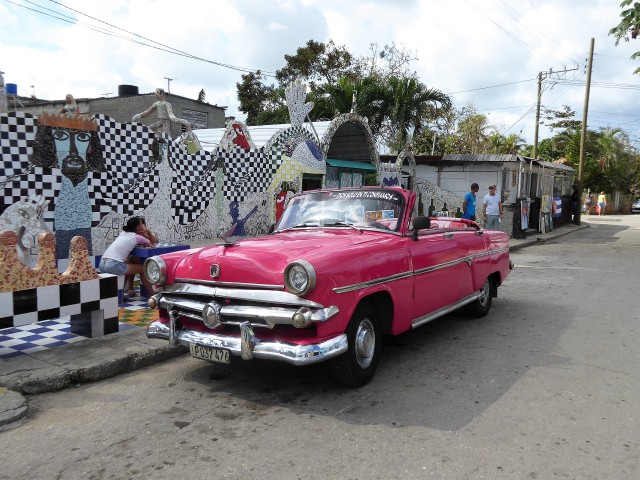 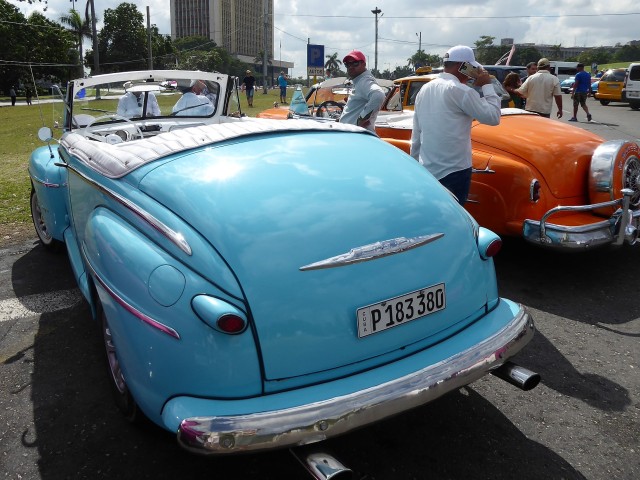 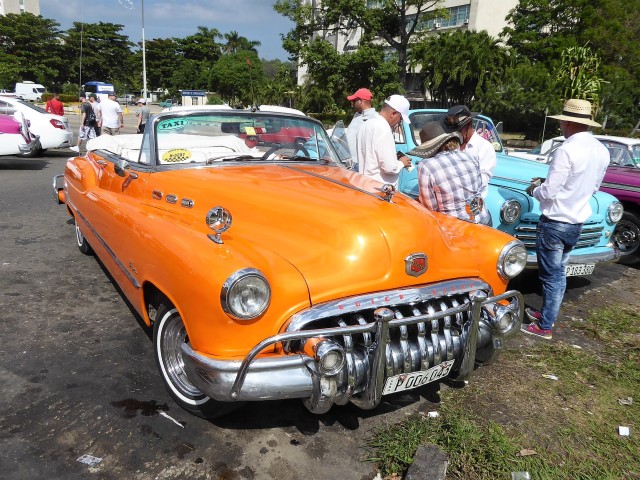 with chrome detailing everywhere. Immaculately preserved and cared for, they shimmer in the sunlight, and glisten in the rain. They are everywhere, driven by larger than life cigar smoking cubans with attitude and carrying wildly excited tourists in the back. 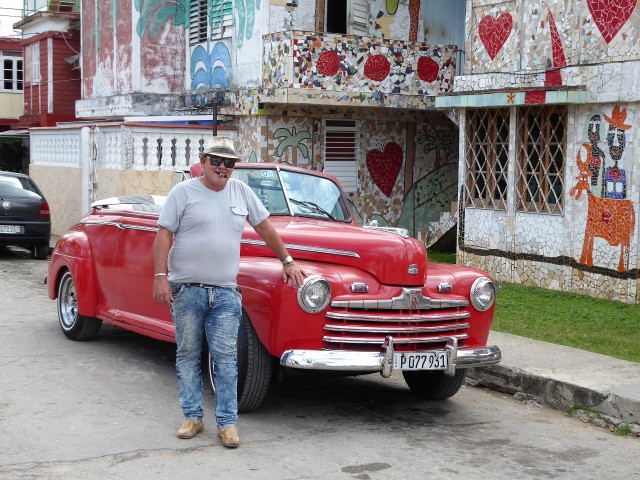 The Fabulosity Meter can’t get enough of them. No one seems to care for the architecture but everyone cares for the cars. 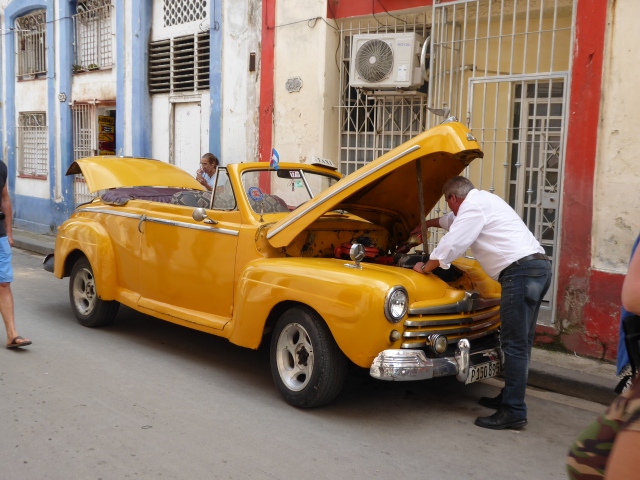 Of course if big and flash and covered in chrome isn’t your taste (as if!), you can always go for tiny and chromeless 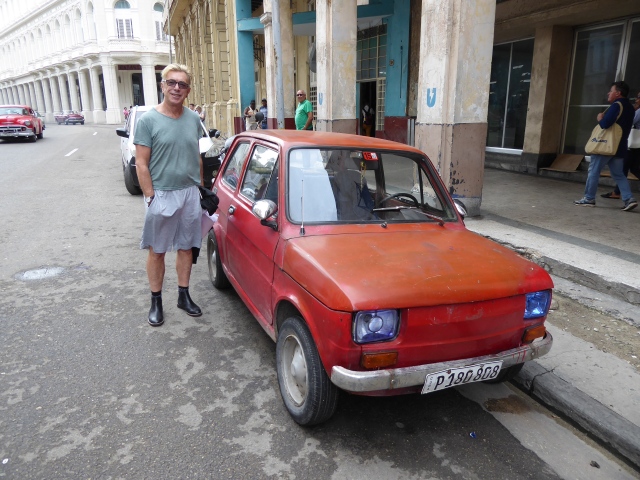 For our first day in Havana we have booked a guide and a car. In the emails exchanged before we arrived, we were promised a fabulous 1950’s Buick to ride around town in. In real life we got a beat up Volga, a Russian car from the 70’s 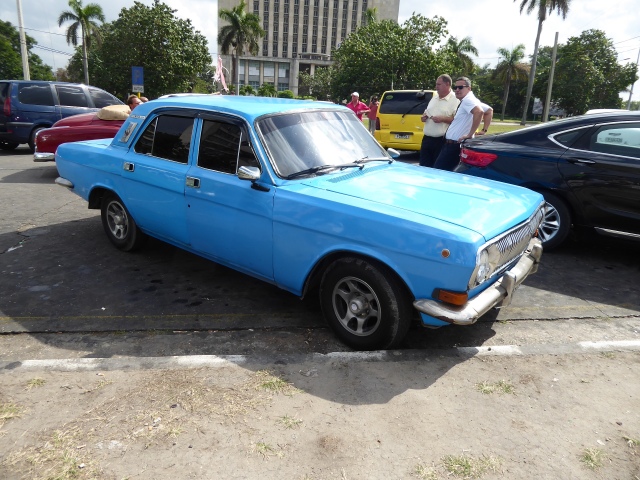 The guide sensing that we might not be happy, has found a dangerously handsome driver to keep us amused. He is small slim and muscular and wearing a camouflage T shirt that looks as if it has been painted on. Tattoos snake round his biceps. His cheekbones alone could make a gay man swoon (that would be me) but combined with three day stubble, huge long eyelashes and a disarming smile he could cause hearts to stop. We have already forgotten about the crappy car.

Gentle readers, I know that by this time you are desperate for a photo. I go to great lengths to try and get one, just for you, you understand. But every time I point a camera at him he waves his hands infront of his face and says “no foto”

Perhaps he is as dangerous as he looks

My mind which has been wandering off into unchartered territory is suddenly brought back to the vulgar Volga. The trunk is filled with two enormous speakers and when he turns on the radio our back seat vibrates, which is sort of fun, and our eardrums hurt, which isn’t. He turns around and flashes that smile

“Is the music too loud” he asks

We have to ask him to speak up

His name is Oscar but he doesn’t give me his telephone number. He drives like a maniac. Nothing on the dashboard works so it is impossible to know what speed he is driving but the engine is screaming in a way that suggests no Volga was ever supposed to be driven this way. It drives like a ship in rough seas, rolling from side to side at the merest touch of the steering wheel. When we turn sharply to the right, the front passenger door swings open. At 50 miles an hour it is a little scary, but the guide who is sitting there just pulls the door shut as if this is a normal experience – and presumably it is. On a sharp left turn the left side of the rear seat that Gordon is sitting on completely collapses leaving Gordon leaning dangerously against the door, and barely able to see above the window. Oscar flashes a smile, flexes his muscles and bats his eyelashes all at once in an effort to make us feel better. It works miracles

Between the two front seats there is a taxi sign 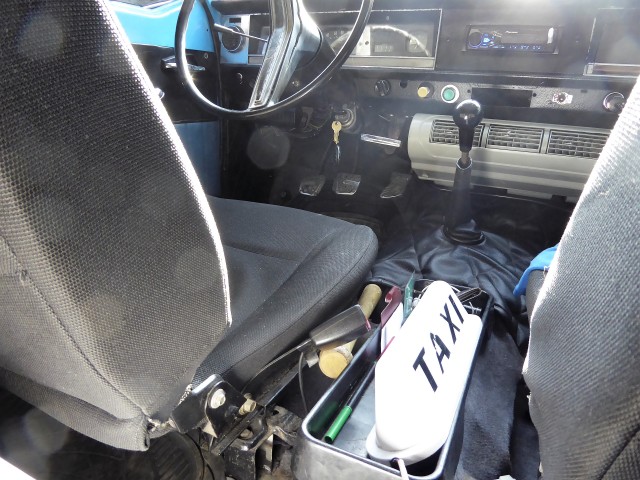 which presumably Oscar has “borrowed” from a real taxi. I also presume that whenever he wants to earn some money, he sticks the sign on the roof and picks up unsuspecting fares.

Our guide is Raidel . He too is handsome but there is nothing dangerous about him. Quite the opposite: 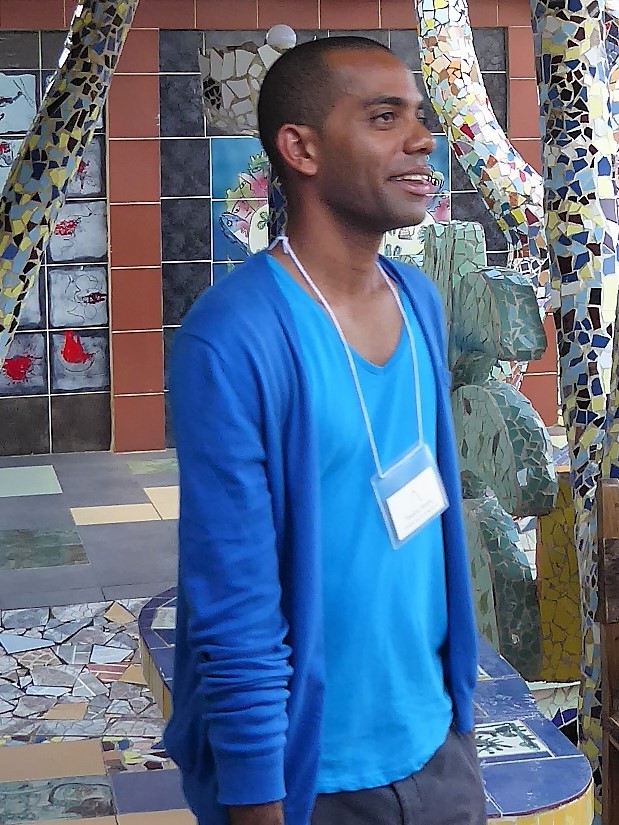 He is incredibly bright and well informed with an excellent command of the English language. Plus he gets our sense of humour and frequently explodes into paroxysms of giggles, covering his face with his hands and turning bright red which makes him rather appealing. He tells us that there is a saying that in heaven the organisation is left to the Germans, the cooking to the French, the humour to the English and the love making to the Cubans. I wonder if he made that up.

He is 32 and a qualified doctor specialising in research in chemical biology (I think that was it) but he makes more money being a guide. No one, he tells us, makes enough money to live on. He is convinced that the government keeps it like that so that the people focus all their energy on surviving and none on revolution. It is a bold statement to make in a country where there is limited free speech. He tells us he has the same aim in life as many Cubans – to leave the country. He says America is impossible now and even if it wasn’t he wouldn’t move to a country that picks Mr Trump to run it. He would like to move to Europe but as a doctor his movement is strictly controlled by the government. They have invested a lot in his education – which was all free – and have no intention of letting him leave, even on a vacation. It is a sad and moving story and one that we suspect can be heard many times over.

Like Loading...
This entry was posted in Cuba, Uncategorized and tagged 1950's cars, Havana. Bookmark the permalink.

6 Responses to The dangerous Oscar, the lovely Raidel and the faded Havana