The Amazing City of Dubrovnik

Of course Dubrovnik rules the world of walled cities. There is nothing to compare to this amazing place. 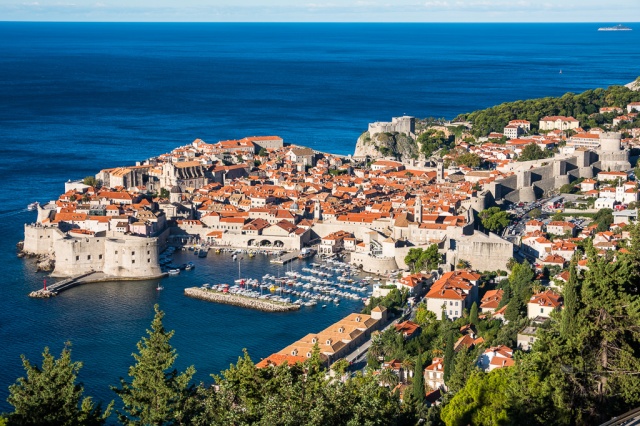 I first saw Dubrovnik in 1966 on the same trip I mentioned in the Venice blog. Four of us drove from England to Athens and back in my little Morris Minor. I loved that car. We found ourselves in Dubrovnik looking for somewhere to stay without the help of computers and the internet, let alone Airbnb.  Unimpeded by other tourists or any rules and regulations we drove round the old town until we found a little apartment to rent in a house belonging to an elderly widow (well at 19, everyone seemed elderly). She took us under her wing and made us a welcoming pot of turkish coffee. None of us had tasted anything quite so awful before and when her back was turned we tipped it all out of the window.  Seeing the pot was empty, she made us some more. This went on for two days. We never dared look at her little garden below the window, which must have been swimming in coffee.

50 years later I still don’t like Turkish coffee and Dubrovnik is still stunningly beautiful. But everything else has changed. Traffic is no longer allowed within the old city walls. The place is crammed full of tourists and just getting there is a challenge.

Our cruise ship docks a little way from the old town. There are four other cruise ships docked already. Space is so limited one of them is jammed under the bridge.

We are maybe a mile from the old town, as the crow flies. But the crow can fly in a direct line. Traffic it appears cannot. The one way system winds up hill and down and appears to go back on itself. The ship offers a shuttle bus into town for 14 euros. All cruise ships offer this service in many of the ports. Some ships offer it free, others charge. Holland America charges for EVERYTHING, even for a bottle of water, so it is not a surprise to find that we have to pay for the shuttle. What is a surprise is the price they are charging. Fourteen euros. That is the most we have ever had to pay, and for the first time we have to buy tickets on board before leaving the ship. We soon find out why. There is a long line of taxis all waiting to take us into town for 13 euros, and a bus stop just 100 yards away where a local bus will take you for one euro. Holland America is not making friends.

The shuttle bus takes almost half an hour. There is a huge line of traffic inching its way to the car park outside the old town. Once off the bus, the crowds are staggering. We  fight our way through the city gates only to find the main street almost impassable. It is  jam packed with tourists, gazing at the marble splendors, buying worthless trinkets and eating ice cream.

Finding somewhere for lunch is impossible. It seems the only place to sit and have lunch is on the hundreds of steep steps of the side streets leading up the hill. Tourists stay away in droves when there are steps involved. 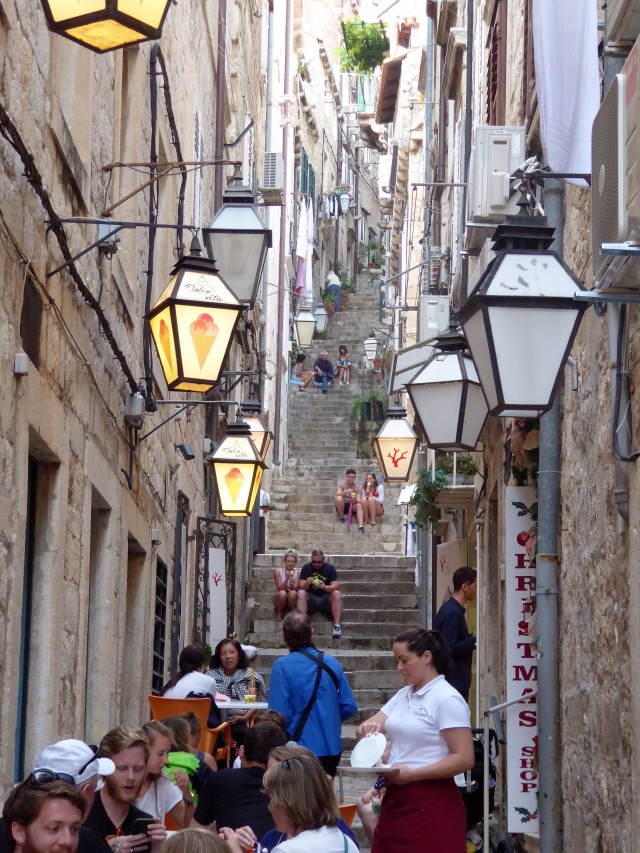 So much has happened to Dubrovnik since my last visit. Then it was part of Yugoslavia. Now it is part of Croatia. The fight for independence cost Croatia and Dubrovnik more than anyone could have envisaged. No one thought the Yugoslavian army would bomb this world heritage city, but they shocked and disgusted the rest of the world by doing just that. And they bombed the hell out of it. Almost 70% of all the buildings were hit by shells. The famous walls received 111 direct hits and Dubrovnik’s baroque buildings and marble streets were hit 314 times. This was just 27 years ago.

It is amazing to see how wonderful the city looks today. Almost all the buildings have been rebuilt and the city once again looks as it did centuries ago. 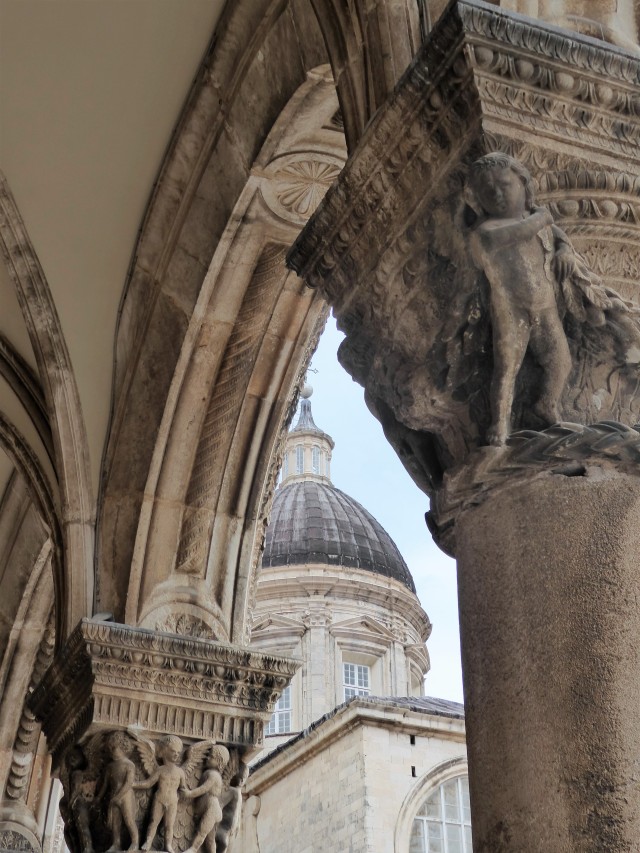 The only sign of the horrors of 1991 is a moving remembrance to those that died. A room full of photos of the young men that lost their lives defending the city they loved is on display in the Sponza Palace. 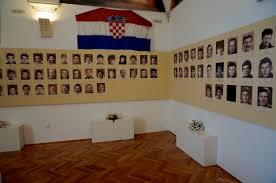 There is no pomp, no ceremony, just 4 walls of photos. The young men staring back at you all lost to the brutality of war, so many of them so young with so much to look forward to. All gone.

Outside, the incredible marble streets have been restored to their former glory. They are glorious in the sunshine, the creamy white marble becomes a shiny pale yellow. The streets may not be paved in gold, but they look it. 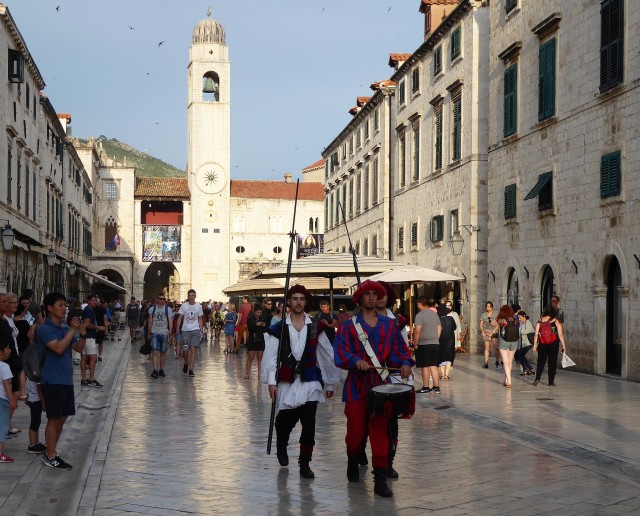 Later in a quick rain shower, those same streets become lethal, the well worn marble becomes slick and slippery as ice. They must lose a lot of tourists to accidents. They could do with losing a few more

Years ago, the city banned cars, to protect the city. Will they at some point have to ban tourists, or at least control the number.

All the beautiful cities of Europe are facing the same problem. They were built centuries ago when no one could possibly have imagined these crowds.

But if you look carefully there are still beautiful walled cities that the crowds haven’t found. All you have to do is to wait for the next blog

2 Responses to The Amazing City of Dubrovnik