The split in Split

Split. The very name should have told me there might be more to this city than meets the eye.

Fifty years ago we drove through Split without stopping, not even for a coffee, not even for a pee. Even the little Morris Minor, its tank half full, didn’t want to stop. All we knew was that Split was a large city based around a large working port. The setting was lovely, impressive mountains on one side, the sparkling blue waters of the Adriatic on the other. But in between all we could see was street after street of shabby uncared for apartment blocks. It was depressing and besides Dubrovnik lay ahead

There was no Rick Steves or Lonely Planet to tell us we were missing an incredible old town. Worse yet Games of Thrones hadn’t been thought of, so Split really wasn’t on anyone’s map.  And this was fifty years ago so maybe the old town was just an old town, and not the exuberant heart of the city that it is today,

It is just a 10 minute walk to the old town from the cruise ship. It looks like another walled city, but it is so much more than that, or to be precise less than that. It is not a town at all, it is a Roman palace that now houses the old town: A Unesco World Heritage site and one of the world’s most impressive Roman monuments.

The year was 295 AD. Emperor Diocletian had been looking for a nice spot to build his retirement home. Not content with just anywhere he chose this spot because of its natural beauty and wonderful views of the islands off shore. Not content with just any retirement home he built this incredibly lavish retirement palace. Well he did have to house 700 odd servants (not that the servants were odd, you understand). If you are getting the idea that Emperor Diocletian was not just any Emperor, then you would be correct. He was a ruthless bloodthirsty egomaniac. Other than that he was quite nice. He believed himself to be the reincarnation of Jupiter. Well if you are going to be the reincarnation of anyone you can do no better than Jupiter. He was the King of the Gods  – a god of light and sky, and protector of the state and its laws. He also married his sister, but if Emperor Diocletian could ignore that, so can we.

Diocletain also had a thing about the Christians. Maybe it was because they believed in God and not Jupiter which he would of course see as a problem, so he persecuted the hell out of them.

When it came time to build his retirement palace, he wanted it to be by the sea so that he could commute by ship, which seems perfectly reasonable. But he wanted more than that. He wanted to be able to step off the deck of his ship into his living room, or even into his bedroom, which perhaps was unreasonable. But he built his palace accordingly. Today you can walk on the lower tier of the Palace, but back then it was covered in water. Diocletian’s ship would then sail slowly and magnificently  through the columns of the palace and stop at the required room. I think the Fabulosity Meter would have loved that.

It would also have loved the entire palace. Diocletian believed that you can never have too much of a good thing, and he did “over the top” with enthusiasm. My kind of guy. Not content with importing a wonderful granite Sphinx from Egypt, he imported twelve of them to stand guard around his palace.

In retirement he remained out of the public eye. His death passed with little fuss. One rumour has it that he was killed by a lightning strike, which seems entirely fitting but not necessarily true. His fabulous palace was left uncared for and allowed to crumble and decay.

More than a century passed before the ruins of the palace were inhabited again. The new residents did nothing to the crumbling ruins, they just built in and around them, giving even more resonance to the name Split. The mix of the Roman styled palace and the later buildings makes for a striking contrast. And finally it was payback time. In the 6th century, the Christians found Diocletian’s octagonal mausoleum and converted it into a church, leaving the exterior still encircled by the original colonnade of 24 columns 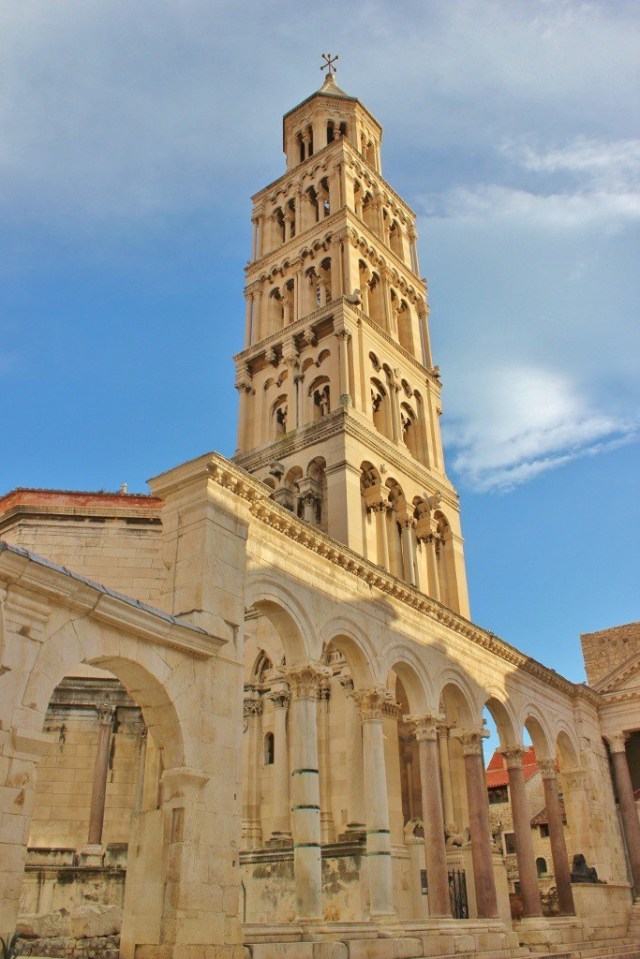 (The tall belfry was added between the 12th and 16th centuries and the church became a cathedral.)

It is now revered as one of the oldest Christian churches in the world. Diocletian would be turning in his grave if only it hadn’t been destroyed by the Christians.

Inside, you can clearly see the octagonal shape of the original mausoleum, as well as a frieze running high around the walls which surprisingly includes images of the Emperor and his wife. Did the Christians just miss that or did they leave it there to taunt his memory?

And to add  insult to injury, the Christians objected to the Egyptian imagery of the Sphinxes inside their cathedral and destroyed all but one of them. Quite why they left one untouched is unclear, but today it reminds us of how grand this palace must have been 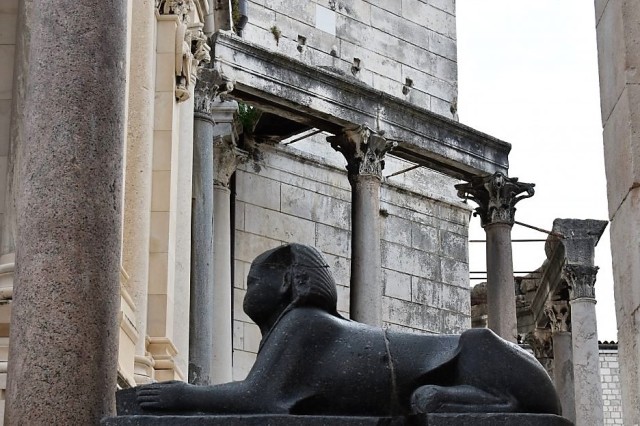 Over the centuries many changes have been made to the palace, but the original layout still exists with four huge gates leading to the central courtyard.

The courtyard is still the focus of the old town, its imposing architecture and mix of styles creating a perfect gathering point.

A cafe has placed cushions on the many steps around the square. Tourists hot and tired from a long day, plonk themselves down naively grateful for somewhere comfortable to rest, unaware that they are about to become customers of an enterprising cafe owner. 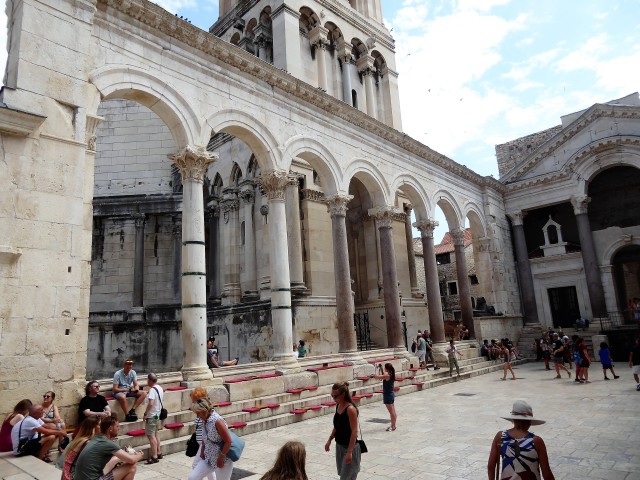 It’s just a ten minute walk from the ship to the old town, or you can take a shuttle. But before entering the old town you have to run the gauntlet of a huge tourist market, perfect for those wanting to buy a fridge magnet, shot glass, T shirt or cap advertising the fact that they made it to Split, but for everyone else it is just another market to get through unscathed. But in return for walking through the market you get to enjoy the old town completely free of any tacky tourist shops. What a great idea!

Once inside the walls, the unique mix of architecture, the maze of narrow streets, the hallways of the palace now turned into alleyways, look for all the world like a set for a medieval  movie.

In fact they are, if you are a fan of Game of Thrones you will recognise much of the Diocletian Palace.

And if you are not a fan of Game of Thrones you will still delight in this setting and the fact that it is not just a World Heritage Site, but home to a wonderful mix of locals with their children running through the alleyways, playing football in the open courtyards, or just sitting on the doorstep playing video games 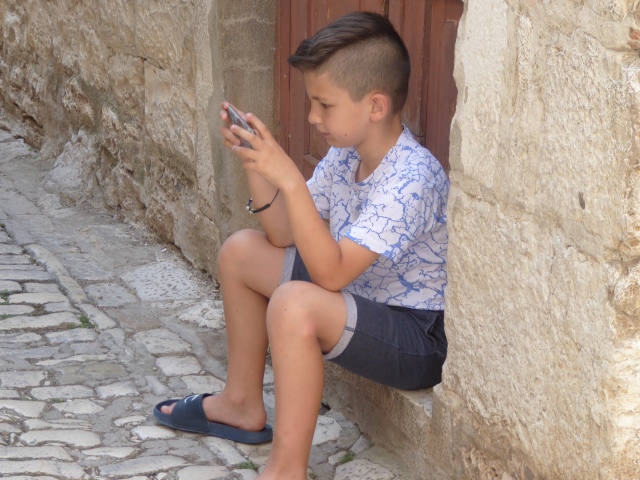 There are no tacky tourist shops, instead the narrow streets are filled with dozens of bars, restaurants and shops all stylish and smart and all buzzing with energy and thriving amidst the atmospheric old walls. It makes for a great environment and a really enjoyable day.

And after all that if you suddenly decide you want that Game of Thrones T shirt, it will be waiting for you outside the gates. Again there is the split

The word fits perfectly. Away from the old town. the city has little to offer the tourist. The old town inside the palace has everything.

11 Responses to The split in Split