The next morning our friendly concierge looks tired and unhappy. Tired because he was partying all night. Unhappy because he was not impressed with how his horse looked in the rehearsal last night for today’s big race: The Palio

Meanwhile in Siena the revelers are out in force. Some look as if they never went home. The entire city is alive with expectation and excitement.  By mid afternoon it reaches a crescendo even though the race is still several hours away. Music fills the streets, everyone is wearing the scarf of their Contrada,  and everyone is singing. Huge amounts of pizza and beer are consumed, but it is nothing like a football match. It is all good natured fun. We walk through the streets feeling completely at ease. We never once see any sign of trouble. We are not wearing scarves so we are mostly ignored but anyone with a scarf is greeted with high fives and cheers by others wearing the same scarf. It is a tremendous atmosphere

By 4 o’clock the streets start to clear as the crowd heads to the Piazza del Campo. We have decided not to go. Instead we book a table at a fun local restaurant for 8 o’clock,  thinking the race will be over. It is not. The restaurant is deserted. The owners and wait staff are all watching the race on TV. They pull up two chairs for us, invite us to join them and pour two glasses of prosecco. Our kind of place, but it is clear there will be no food cooked until the race is over

The horses are all at the starting line and have been for some time. 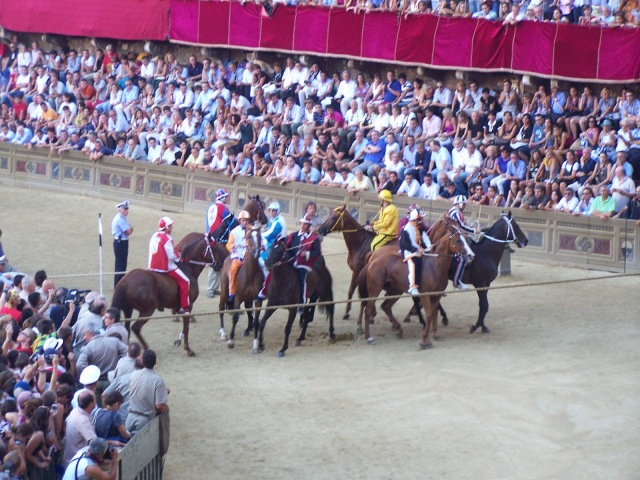 Emotions are running high.  There are great rivalries between some of the contrada and some are arch enemies. It is said that when a husband and wife come from different contrade their emotions are such that they don’t speak to each other on the day of the race.

The jockeys circle round and round, talking to each other, offering bribes threats and promises all the while jockeying (sorry about that) for the best advantage at the start. The bribes can be to help win the race, but also to make sure their arch-enemy loses. Betrayal is common. Guile rather than skill can win the day.

Lots were drawn prior to the race to decide the order line at the starting tape, the inside being the favoured position. But one lucky jockey gets a major advantage – he gets to control the start. He draws the outside position which is not good, but he can hang back from the rest of the pack, and when he is ready he makes a run for the tape and then and only then can the race start. This immediately makes him the centre of attraction, which when bribes are being offered is definitely a good thing. This year he has an arch enemy and it becomes apparent that his main focus is not to get a good start himself but to make sure his arch enemy gets a bad start. As the tension rises and the horses get more and more excited they pull at the reins anxious to start. The jockeys find it harder to keep control, and have to calm the horses down by turning them round and walking away from the start line, before coming back. The jockey in control of the start is waiting for the moment his arch rival is facing the wrong way  and then he makes a run for the starting line

While all this is going on the jockeys’ eyes are focused on the one rider hanging back, waiting for him to make his move. But they have to be careful, if they cross the start line in front of the control horse, it is a false start.

There is no rush to begin. This is where the race is decided and all negotiations must be completed before the off. There are three false starts and over an hour passes before they are finally off.

The locals belt out their good luck choruses, thousands of flags are waving and drums are pounding. A medieval sporting event in a medieval town. Even on TV it is enthralling.

The control horse has made a fatal error. His arch enemy is facing the wrong way but all the other horses are in the perfect position so that when the lead horse makes his run on the outside, most of the horses get an excellent start and the lead horse is left way back in the field.

They race three and a half times round the track. The track is narrow and the bends are sharp. The walls are padded but there is a real threat of danger. 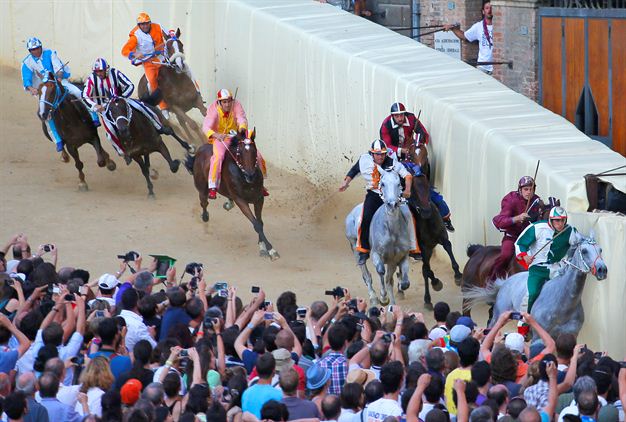 Horses bounce off the padding and into each other. Occasionally some fall and almost certainly at least one horse will lose its rider. But these are race horses that love to race, and they keep running. And remember this is no ordinary horse race. Here the first horse across the finishing line wins regardless of whether it has a rider or not, just so long as the contrada colors are still tied to it.

The atmosphere and the noise is incredible but the race is not. Andrea Mari, a jockey representing the Drago Contrado, or Dragon District takes the lead from the start and stays there until the end, crossing the line 70 seconds later. It’s not even close. The main excitement comes from a riderless horse which manages to make its way up from 5th place, pass two horses with riders and cross the finishing line in 3rd. If anyone ever doubted that race horses love the thrill of the race, then this is the proof.   One horse with a rider finishes half a lap behind the others. It doesn’t look as if he is even trying. It must have been a huge bribe.

As Andrea crosses the finish line, fans leap the barriers and run onto the course. Pandemonium breaks out across the square and in the city. The horses and jockeys having enjoyed their 70 seconds of fame must be rushed out of the square before they are crushed by the over excited fans. Outside of the square, the lights throughout the city go out, except those in the Dragon District. This way everyone knows who won.

Suddenly our restaurant starts filling up. The waiters get back to work and the chef returns to the kitchen. Bottles of prosecco are opened and emptied at an alarming rate. Songs are sung, flags are waved. It is almost as much fun as being in the Piazza.

After the meal we wander back through the streets of the city. Here the party has only just begun. Impromptu processions from the winning district fill the narrow streets.

There is a band playing and the young men march, waving their flags in time to the beating of the drums. 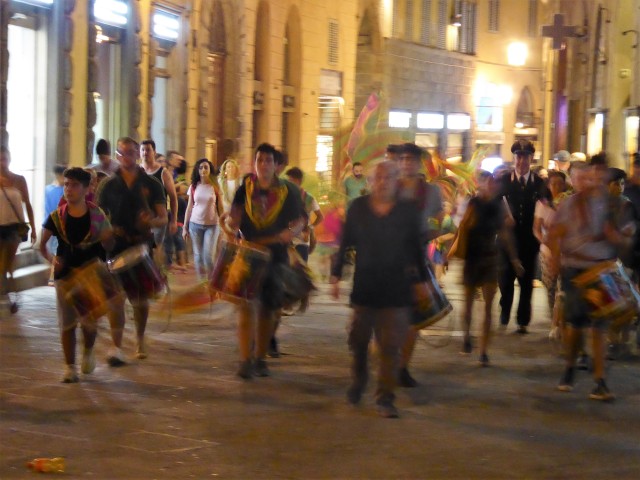 And they suck baby pacifiers. It is a strange sight, meant to signify their rebirth thanks to their horse winning the race, but all it does is make a lot of grown men look like three year olds with hairy legs

The winning district does not win money – they merely get a banner to fly. Not much of a prize but it is held in awe by those that have one. Money is made and lost by those who bet on the race and by those who accepted bribes and fulfilled their obligations. An added bonus for the winning district is that they are allowed to make fun of the losers, sportsmanship having nothing to do with the Palio. However the favourite way of making fun of the losers is apparently to wish them Happy Christmas. As someone who likes to make fun of just about everything, I have to say that is pitiful. If they want a little help (and they do) I am always here to help.

It is well past midnight and many of them look as if it has been a long few days. We feel the same way, and slowly make our way back to the hotel leaving behind us the sounds of one hell of a party that goes on till the early hours. Once our heads hit the pillows we are blissfully unaware of it all.

If you are interested in watching the race, here is a link:

Note the photos of the race on the final day are obviously not mine, but borrowed from a friend

We have three more weeks of travel, but this will be the last blog on this trip. But never fear, there are many more trips and posts to to come. Just be patient!