South Georgia Island ………All I want for Christmas

South Georgia Island is just about as remote an island as you can find anywhere so it is no surprise to learn that it belongs to Britain, along with the Falkland Islands . Why is it that if there is a remote desolate island anywhere in the world Britain has to own it?

Maybe no one would have heard of it if it wasn’t for Ernest Shackleton and his epic trek to safety across the mountainous ridge that dominates the island. He later died of a heart attack on the island. His wife asked that he be buried on this island ostensibly because he loved it so much, but a more likely explanation is that he was having an open affair with an actress in England and she wanted his body as far away from her as possible.

Some of the people that make this extraordinary journey to visit South Georgia each year come because of their interest in Shackleton, others come because this inhospitable island has the highest concentration of wildlife anywhere in the world. We have come for a mixture of both reasons, and for the chance to drink a lot of champagne and eat a lot of caviar, all of which is working well so far

It takes four nights and three days to sail here. During that time we never see land or another ship. That is how remote we are. On the way our time has been filled with lectures and talks about how the island must be respected, treated and preserved as a wild life reserve.

A huge effort is being made to rid the island of any invasive plants and animals that have been brought here in the past by whaling ships, and to return the island to its original pristine state. Today, only ships with less than 500 passengers can stop here, and their every stop is closely monitored. Permission must be obtained to land at each place and inspectors are there to make sure our clothes are clean when we land and again when we leave. It is quite an operation. The ship has a crew of 14 expedition specialists, each one with their own area of expertise, such as  geology, birds, whales, and of course penguins, but they also spend a lot of time organising the details of each stop for us.  We go through several Bio Security measures on board. All our clothes have to be inspected and where necessary cleaned to make sure that we do not carry any seeds, soil or insects onto the island that don’t belong there. Our boots have to be washed with biocide before and after each landing. We positively sparkle by the time we set foot on the island

It is December 25th, Christmas Day, when South Georgia first comes into view. And what a Christmas gift it is. It is  a beautifully sunny morning and the island looks magnificent 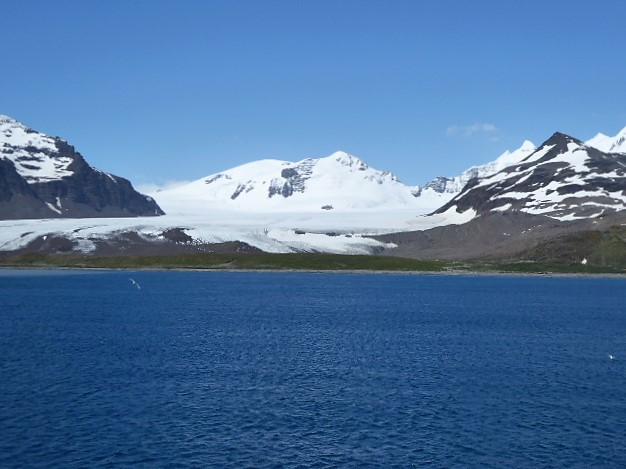 Salisbury Plain is one of the few places where zodiacs can actually land. It has a long beach and quite an expanse of flat land behind it, which is very unusual.

It is home to what is thought to be the largest colony of king penguins, over  250,000 of them and a huge number of fur seals.

Zodiacs are lowered from the ship and the expedition crew go ashore first to inspect the site.

Their task is to find us a safe path through the seals to the penguin colony,  and then mark it out with small flags. The rules say that no one can get nearer than 5 metres to the wildlife and so an orange rope which we are not allowed to cross is placed on the beach. Of course no one tells the penguins this and the young ones in particular are curious and cross the orange rope to get a better look at us, and who can blame them. We all look slightly ridiculous puffed out as we are in our various layers of clothing and topped with a bright orange parka thoughtfully provided by Seabourn so that we can be spotted easily by the crew.

The king penguins also have orange markings so the young assume we are there to feed them and squawk, flap their little wings and generally act like a spoiled child when we don’t. Another rule says that we are not allowed to sit down which is rather sad because the penguins are small and it would be interesting to get down to their level

The crew then begin loading the zodiacs which take 10 or 12 of us at a time.

Seals and penguins are there to greet us

The seal pups are adorable 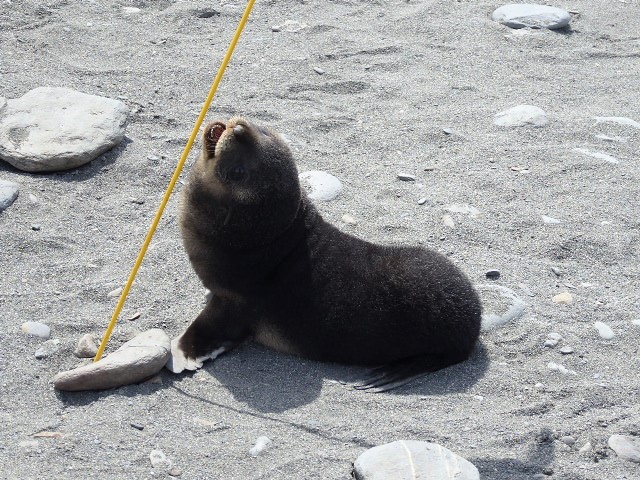 But it is the adult seals we have to be careful of. The males are huge

Each male has marked out a plot of beach which he has claimed as his own. Here the attracts females to breed with him. Each male will have several females. The naturalists call them the male’s harem, which shows a certain disrespect that I’m sure some in the metoo movement would not approve of. The male seal can be very aggressive and dangerous as he defends his territory and protects his harem from other males. We of course don’t know the boundary of the male’s territory and the male doesn’t know that we are not another male seal looking for romance in all the wrong places.  The crew has trained us what to do if a seal attacks. Rule number one is do not run because the seal can outrun you. Easy enough for you to say. Of course, dressed as I am in all these clothes and with huge waterproof boots on, even a penguin could outrun me.

Rule number 2 is standstill and raise your hands above your hands and clap loudly, as if you were at a Beyoncé concert. I can do that, but I am not anxious to put it to the test. So instead I talk to the males and let them know that I have no interest in their females. It seems to work as I am not attacked once.

Safely across the beach, we come face to face with 250,000 penguins. It is an absolutely amazing sight

If you look carefully you will see the petrels and other predatory birds searching for eggs and tiny chicks.

The king penguin is the second largest penguin of all

and the most beautifully marked with its yellow chest, orange ear patch, orange and purple beak and silvery back 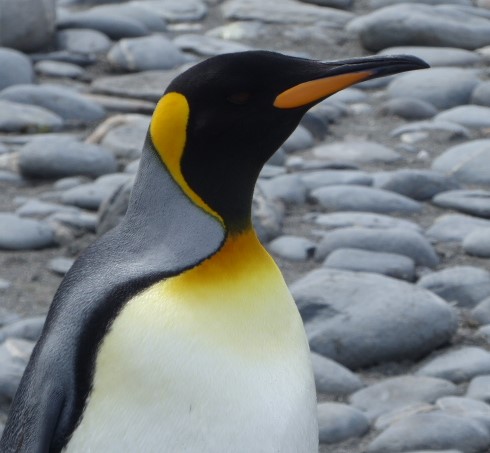 At times they look like old men late for dinner, full of self importance and hurrying along as fast as they can

The brown furry ones are called oakies

They are the young, protected from the cold by the layer of down and the fat beneath it, built up by the masses of food the parents have caught for them. While they are covered in this down they cannot swim or feed themselves. They have to wait until the down has all been moulted, a process that leaves them looking like down and out bums wandering the beach 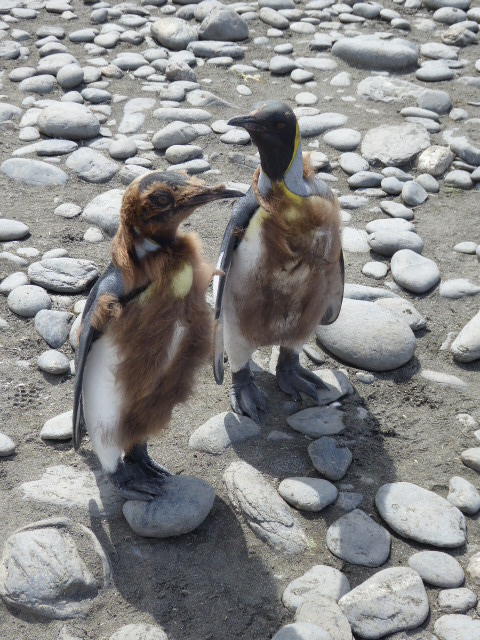 The guides are careful not to alarm the penguins and seals by bringing too many of us ashore at one time. We are allotted  about an hour on the beach with the penguins. It is not along enough. Even the penguins seem to be begging us to stay a little longer 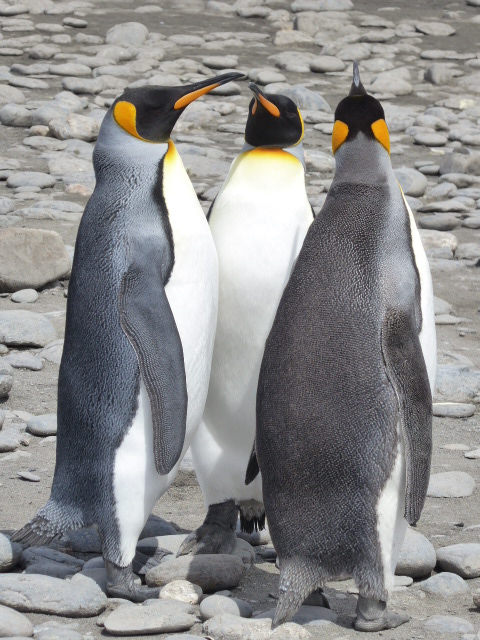 We wish we could

Back on board there is a briefing

The captain has been tracking a large storm with high winds and it is coming our way, so they have adjusted our itinerary for the next couple of days. We are supposed to spend one more day at South Georgia and then begin the two day sail down to Antarctica. But if we do that we will meet the storm head on in the open sea, never a good idea when you are near Drake’s passage

Instead we will be spending an extra day at South Georgia, where if we stay on the north side of the island we will be protected from the storm.

It sounds like a good idea, and the captain should know what he is doing……………..shouldn’t he?

5 Responses to South Georgia Island ………All I want for Christmas