Fun and Games in Murmansk

Olga was keen to let us know about at least  “one way the people have fun” .

It is the annual ice swimming contest. Just think how much fun that could be. This happens every March and it is their way of celebrating the return of the sun after it has been below the horizon for a month. Of course the sun probably isn’t shining but they know it is out there somewhere.

The ice swimming contest first involves breaking through the ice on a nearby lake and making a 10 metre (33 feet, about the size of a smallish swimming pool) swimming hole. 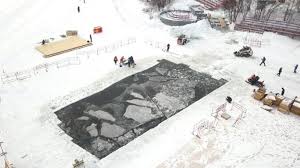 I should say at this point, that I was obviously not there for the games. The photos come from the internet

Once that has been completed the fun begins. The swimmers actually dive in and race the length of the pool. 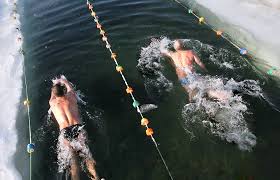 Olga tells us that this past March the air temperature on the day of the race was -5c.  See, the people of Murmansk really are having fun.

After each race the swimmers are given a large fluffy blanket to warm them up. And if that doesn’t quite do it, there is  always a group of Russian men standing by just desperate to stand way too close and grab at different parts of your almost naked body.  Well that might work for me.

All of this began as a simple way for the townsfolk to have some fun. But the idea caught on and now the pool is larger and the competition is fierce.  It has become  a serious event with people from around the world flying in to compete.

Last year they even  had someone from South Africa. Imagine how cold he found the frozen waters!

So now the rest of the world knows how much fun the people of Murmansk are having, and as so often happens when outsiders arrive, it is ruined for the locals

So dear readers, now they have to find another way to enjoy themselves. This time it should be away from the prying eyes of the rest of the world. What could they come up with that wouldn’t attract world wide attention? They realised that it would be better not to do it outside where people would see them. Perhaps something that could be done privately in a small room or cubicle would be best.

They thought about it for sometime. But the solution is obvious. If they could come up with an idea for having fun in public toilets it might solve the problem. So far so good, but there are a couple of problems with this idea. Well actually there are three, but I will leave the third to your imagination.

The first problem is that there are very few public toilets in Murmansk, or Russia for that matter

The second problem is that you have to pay to use public toilets and even then they do not supply toilet paper. So having fun in this instance will cost money, and if you need to use the facility for the purpose it was designed for,  you better bring your own toilet paper.

But nothing stops the townsfolk of Murmansk from having a good time. Unfortunately, while the Murmansk City Council was prepared to encourage the Ice Swimmers, they were not prepared to encourage the toiletierres. In fact, quite the opposite. They decide to post signs outside each public toilet trying to ban these games. And in just in case any foreigners decide to partake, the signs are designed so that anyone can understand them

Banning the last two I find particularly disappointing. Fishing in the toilet seems particularly harmless and uneventful,  while  acrobatic peeing, however messy it might be, could I am sure, become quite the rage .

But perhaps just as disturbing is that they seem to be telling us men (I include myself in that group) that no matter what the purpose of your visit, you should perform it sitting down.

Poo-tin has really gone too far this time.

1 Response to Fun and Games in Murmansk