Gordon’s brother, Graham, is not traveling with us, but today his presence is keenly felt.

The English, as we all know, can be a tad eccentric, and Graham is English. He is what the English refer to as “an Anorak”, which is to say that he is a train spotter. I have never quite grasped the delights of sitting by a railway line waiting for a train to pass and then writing down its number in a little book. But Graham has, and for years he has traveled all over the UK, USA, Africa and Europe to ride trains and write their numbers down in his little book.

He also has one large room in his home covered in railway memorabilia. I could say that at least it keeps him out of trouble. But it doesn’t. But that is not the subject of this blog

There is a small railway line outside of Jojawar that we know Graham would love, so we set out to capture its number for him and take photographs 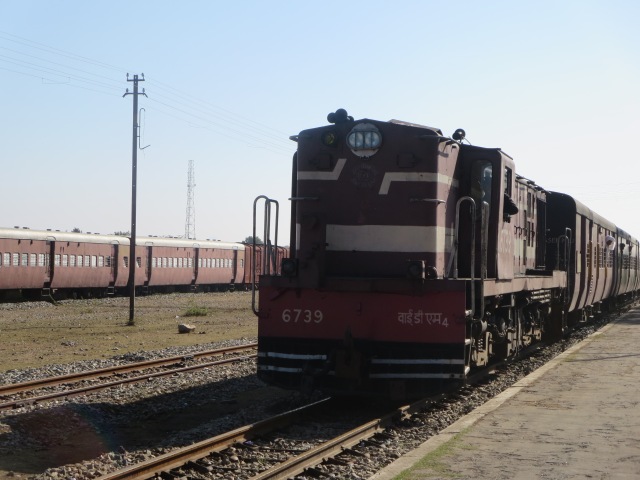 First thing in the morning we drive up to the highest point in the hills, to catch a train to bring us down the hill.

I can hardly wait.

The train travels about 16 miles down the steep hillside and it takes 1 hour and 20 minutes of breathtaking excitement.

How much excitement can I stand in one day.

The station is particularly welcoming

and the ticket office and timetable very helpful

Apparently the time table is just a rough guide as to when a train might arrive. Some passengers are well aware of this and settle in to smoke a little something while they wait

Or perhaps enjoy a snack at the station cafe.

But inside it is even worse

This, as Graham well knows, is not the style to which I am accustomed. He owes me big time!

The journey itself is pretty spectacular

particularly when we learn that the tracks were laid in the thirties. It took 5000 men five years to complete, with two tunnels that they carved without the aid of dynamite. It is said that the British built it, but I suspect there was not one Britisher amongst the 5000 men who did all the work.

At the end of our journey we are greeted by a surprisingly bustling station. 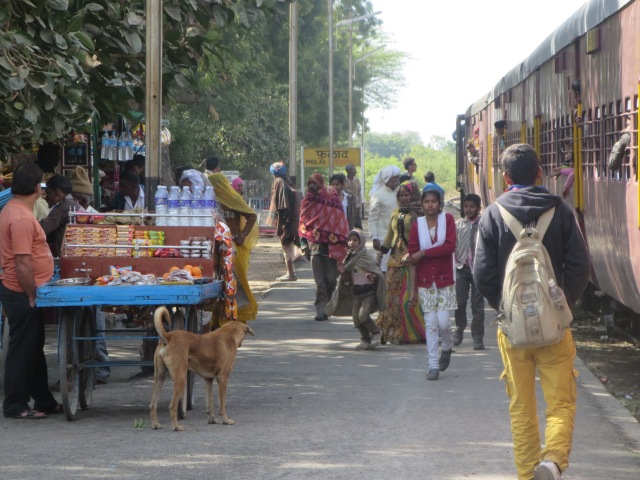 We return to the hotel for a much needed rest

In the afternoon the nobleman says he would like to take us on a drive around some of his land. We realise that this is a great honor and are happy to accept. We travel in an open jeep, all the better for the locals to see the nobleman. They either clasp their hands as if in prayer, or place their right hand on their heart. Which ever form of greeting they choose it involves a bow. He graciously returns every greeting.

I realise that my mistake at home is not having an open car. First thing I do when I get home will be to buy a jeep. It is obviously important for my people to be able to see me.

The following day is Republic Day. There will be huge celebrations, most of them centered around the schools where the children will put on a performance for the village. They will dance, sing and recite poetry. As we pass one school we can see the children in the playground rehearsing for the next day. The nobleman asks if we would like to visit.

His driver steers the jeep straight into the playing field and up to the children. Once the teachers spot his arrival panic sets in. The children are told to stop what they are doing and to sit quietly on the ground. Amazingly it happens instantly. Some are dispatched to fetch chairs. They are rattan chairs with very little rattan left. The nobleman is offered the one with most of the rattan still present. We are given chair frames to sit on. 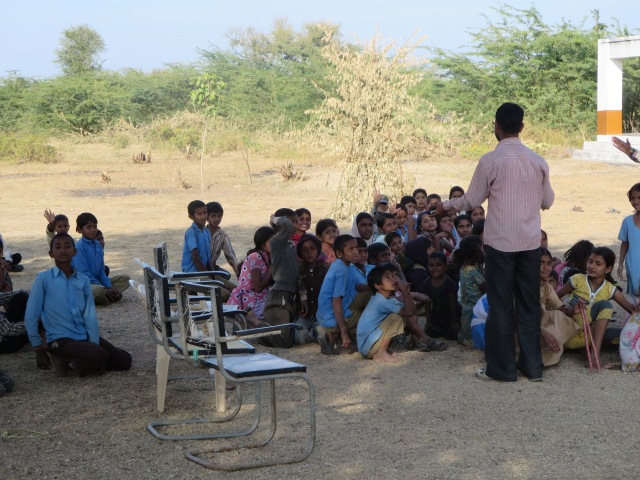 Once we are seated the children rise as one and rush to the nobleman. They crowd round him, each one reaching to touch his feet. I happily offer my feet to be touched, but they are ignored. Maybe it is the brand of sneakers I am wearing.

The teachers then ask the nobleman if he would like to see some performances. There is a scramble by the children to be chosen. One after the other they get up and perform their dance.

They all seem to be taken from Bollywood movies rather than Indian traditional dancing, but their excitement is palpable and it is a delight to watch them, The nobleman rather sadly pays little attention, preferring instead to show us photos of his grandchildren on his Iphone.

We comment that the school seems to have a lot of students. The nobleman tells us that he built the school and it was very poorly attended until the local government offered a free meal every day, along with free books. From that moment on it has been packed with children, which is a wonderful testament to how important the villagers view education

Next we drive to a village that is the temporary home of a nomadic tribe called the Rabari. They farm goats, sheep and camels and travel about 600 miles to central India and 600 miles back every year, following the rains. They herd their animals 15 miles a day, strapping any babies, small children and young animals to the back of the camels. We have come to visit one man who has stayed behind with his wife and daughter because the man has a problem with his leg. The nobleman is arranging for a doctor to see him.

We enter a small yard where the man is sitting on a bed in his underwear. He is a complete delight. He takes an instant shine to me. For ten days every attractive man we have come across has had a fatal attraction for Gordon, and this is what I get

He asks me to sit on the bed next to him and then talks to me for five minutes in a language I have no comprehension of. He unwinds the bandage around his leg and tells me all about the injury. All the time he is smiling and laughing. I have no idea what he is saying but I am enchanted.

He is so excited that I want to take his photo. He asks me if I would like to meet his wife. She comes over and lifts her veil 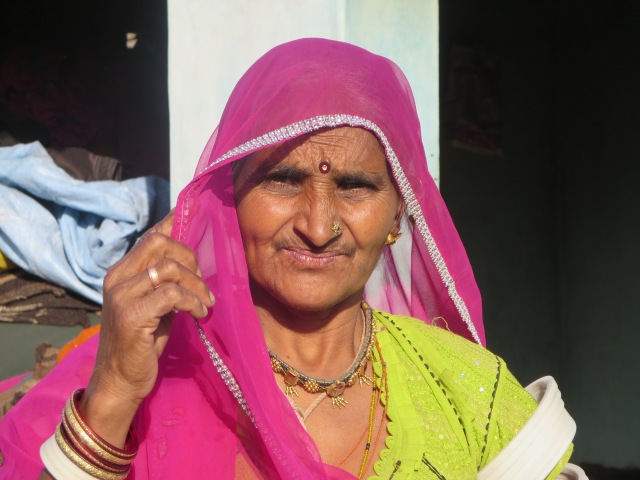 Now I understand why I seem so appealing to him

Lastly we visit a local farm where the farmer grows organic vegetables for the nobleman’s hotels. He inspects the crops with the farmer while the driver serves us tea with great fanfare. 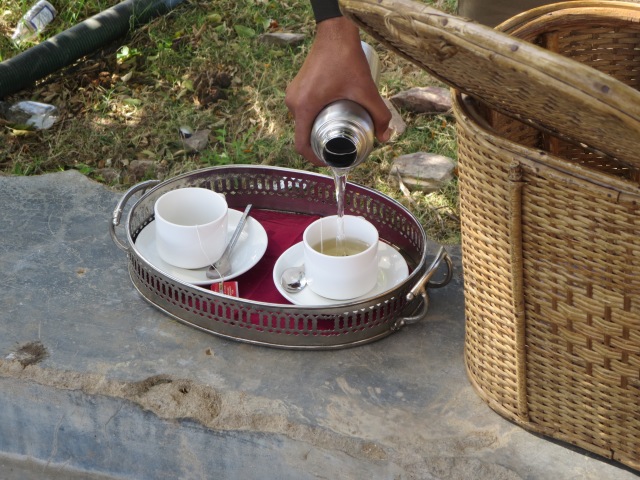 When we return to the hotel the nobleman is exhausted and demands coffee and biscuits before we get out of the jeep. As we walk along the path to the hotel, a chair is rushed out and the nobleman sits down in it with a great sigh. The fact that we are in the middle of a footpath is irrelevant. He wants to sit down NOW, and he wants a coffee. A moment later one of the waiters rushes up with a cup of coffee and some rich tea biscuits (the English readers will know what those are).

He dunks his biscuits in the coffee.

This man is a shining example of how I have always wanted to live my life.

My mother never allowed me to dunk my biscuits as she considered it common.

And Gordon could never be persuaded to wait on me like this.

6 Responses to Jojawar – a noble tour