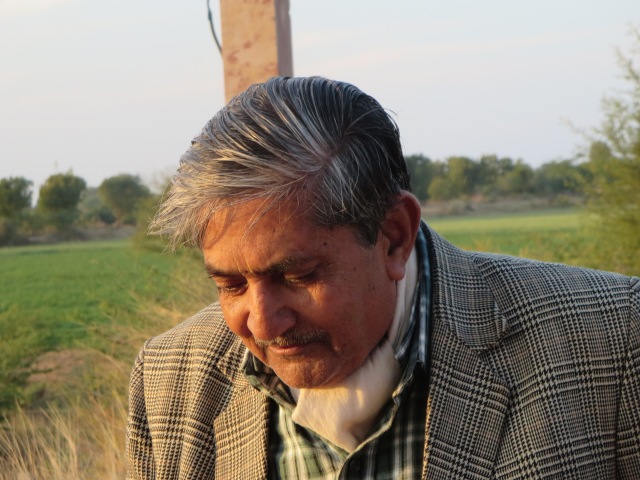 He never tells us his name

He owns the hotel and has come to greet us. We introduce ourselves, but he merely shakes our hands.

We soon realise that this is because he is a “noble man” , which we gather is somewhat equivalent to what the English would call, landed gentry, what the Europeans would call minor aristocracy, and what the Americans would call a Land Baron. In India he is one step below a Maharajah. He owns everything around here: the town of Jojawar, the villages, the farms, the land, everything. People don’t address him by name, they simply place their hands together below the chin, as if in prayer, and bow slightly to him. An entirely suitable form of greeting that I think should apply to me

We are staying in what used to be the family hunting lodge, but as the joys of hunting faded, so did the lodge. It became neglected and forgotten. His two sons “discovered it” four years ago. His son explained that they have so many homes like this that it was easy to forget one. We tried to look as if this was completely understandable.

Their main residence is in Jojawar where they have thirty five rooms and bathrooms they didn’t use, (well one wouldn’t, would one ) so they turned that part of it into a hotel. At that hotel they get a lot of tour groups and they realised that the more discerning  independent travelers were not receiving the attention they expected so the two sons set about turning the hunting lodge which has just 8 rooms and two suites into something a little more upmarket for the more refined traveler. That of course would be me.

The Lodge opened as a hotel a year ago. The son tells me they had a soft opening. I am beginning to think it is still going on. We are the only people in the hotel, and judging from the age of the fruit waiting to greet us in our room, no one has been here for quite some time.

This may well be because it is very hard to find, and the entrance is particularly unprepossessing.

Joginder had to ask directions several times before we arrive at a long and narrow country lane. From this we turn onto a narrow dirt track which ends abruptly after a quarter of a mile. We then have to walk along a rustically paved walkway (read: any minute now you may trip and break a limb) for several hundreds of yards,

followed by a flight of steps.

“What were they thinking?”we think

“ Who in their right minds would choose to stay here?”

When we arrive, we step under a balcony to enter the lobby. An employee is hiding on the balcony and as we pass under it, he throws handfuls of petals to rain down on us. A delightful idea, but unfortunately his timing is hopeless and he misses us completely. It is a sign of things to come.

The first step taken by the family to turn this place into a “boutique” hotel was for the father to send his son on a hospitality course in Australia. This was of course their first mistake. It’s a bit like sending someone to Germany to attend charm school.

Their second mistake was to dress their waiters in what appear to be old English Airforce uniforms:

We are not sure whether we are going to get served or enlisted. And the German tourists would not like it one little bit. So maybe it wasn’t a mistake after all.

They appear to have purchased the uniforms in one size. The poor little guy on the left is swamped by his jacket and every time he serves us he first has to find where his hand is in his sleeve. They also appear to have never been cleaned since they were used in the second world war (the uniforms that is, not the waiters).

The path to our suite passes through their vegetable garden

There are some beautiful touches 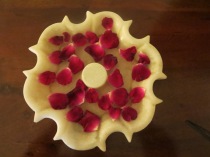 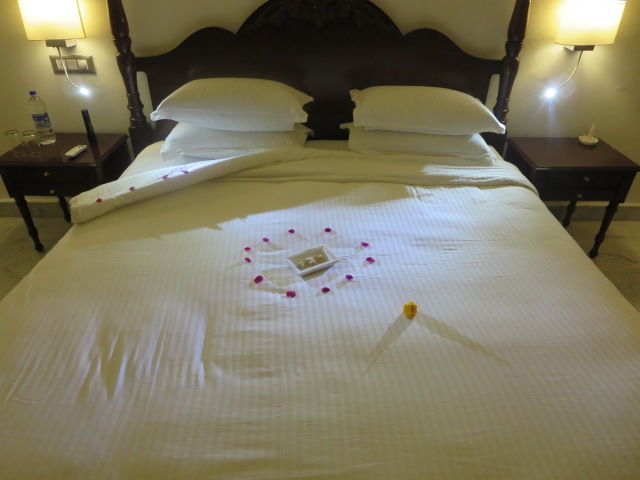 Once in the suite, we are delighted to see a large and stylish bath.

Every where we have been has only had a shower and, being English, we do love a bath. Like many “heritage” hotels each bathroom has its own water heater which you are asked to turn on fifteen minutes before you want hot water. We wait half an hour and fill the bath. Which was our first mistake and their third. The water has run cold. Apparently the water heater only holds enough water to cover the bottom of the bath with about two inches of water. We pull the plug from the bath to empty it and discover mistake number four. The water flows out of the bath onto the bathroom floor and within minutes the entire bathroom is flooded.

We call the front desk and they send someone over who brings a small bucket and nothing else. He then proceeds to use all our towels to mop up the water. When he has finished he drapes the soaking wet towels over the edge of our bath where they proceed to drip water back onto the newly dried floor. He does not provide us with new towels.

There is only one answer to all of this and that of course is a large cocktail. We meet the son who asks us how everything is.

“Damp” I reply, with my best sardonic smile.

He ignores the comment and tells us that “the boys” will see to everything we need. This of course perks us up no end until we realise that he is referring to the staff, and we have already seen some of them in action.

Breakfast is served on the long balcony over the front of the hotel, which looks out over the main attraction which is the pond in front and the masses of birds which flock to it.

We soon discover that this is not the main attraction, it is the only attraction and as such is referred to as the lake

The weather is beautiful during the day but still bitterly cold at night. The hotel manager asks if we would like our dinner served outside on our private terrace which has a fireplace. Considering there is nobody else in the hotel, any terrace would be private. They will light the fire and put our table right next to it. It sounds wonderfully romantic and when we arrive they have a huge wood fire ready to burn for us. 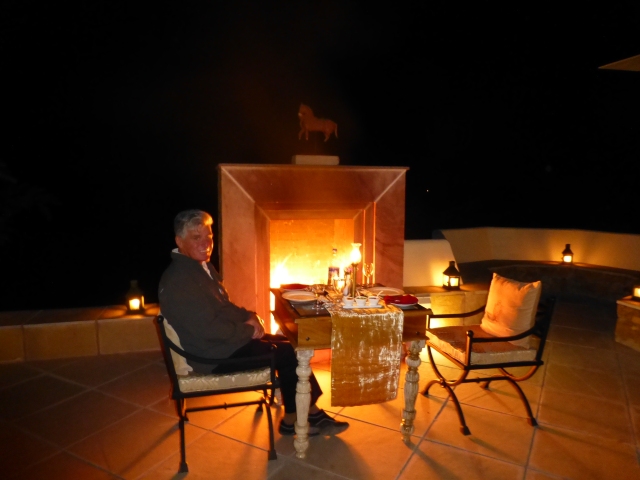 Their fifth mistake is that there is no chimney to the fireplace. Whilst we are beautifully warm, we are also periodically engulfed in huge clouds of wood smoke that sting the eyes, hurt the throat and cause our clothes to reek of smoke.

The food is spectacular, the best we have had anywhere. We get course after course of tiny appetisers, followed by a delicious soup and then the main meal. There are eight different serving bowls filled with different dishes, each one flavoured perfectly without being too spicy. It would be a perfect evening if it weren’t for their sixth mistake.

Two waiters, the chef and the hotel manager all stand in a line three feet away from us and watch everything we do, and listen to everything we say.

I feel like Maggie Smith in Downton Abbey (comments are not needed or called for, thank you). The only way to enjoy the evening is to pretend they are not there. It would be difficult under the best of circumstances, but every time we do something that appears odd to them, they give each other meaningful looks and try not to giggle. It is impossible.

The only way this hotel will succeed is if they manage to find that rare customer who not only loves the Raj period, but is a fan of Fawlty Towers

4 Responses to Jojawar – fire and water.