Gordon has a cousin, whom I shall call Fred, because that’s his name. He is 92. He was great fun when he knew where he was and who we were, and he is still great fun now he remembers next to nothing. I know he wouldn’t mind me writing about him. It would have made him laugh when he was the old Fred. And it will still make him laugh today if someone reads it to him and tells him that it is about him.

Fred’s son, Tony, arranges for us to visit him at the home. Tony comes with his wife and daughter, and Graham, Gordon’s brother, comes with his partner. We have a party on the lawn of the home, sitting under sun umbrellas on a perfect sunny morning.

We had arranged to get there at 11am and everyone arrives promptly, except Fred, who is still eating his breakfast when we arrive. He is delighted to see us because that’s how he is. He actually remembers that Gordon and I are from America because Tony has been telling him everyday for the past week that we are coming. He remembers the America bit, but not who we are. But he doesn’t mind. Nor do we.

Fred is smartly dressed in khakis with a light sweater over a shirt, all carefully colour co-ordinated. He looks tanned and healthy. His face is remarkably wrinkle free and you would easily take him to be twenty years younger than he is. As we make our way to the garden, Tony hands Fred his hat, which he dons at a rakish angle and grins. He looks great, and happy, and just a little bit devilish 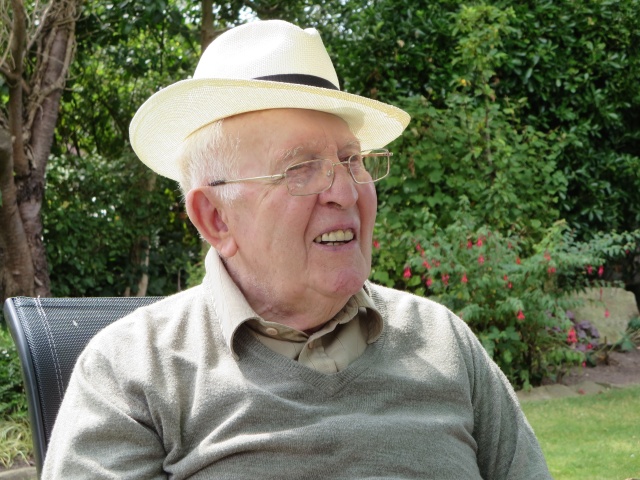 Fred always had a wonderful sense of humour, and although his memory has left him, his humour has not. We all sit round in a circle chatting.

Fred follows the conversation perfectly and joins in with his quips. We wonder why he was still eating his breakfast when we arrived and ask him if he had a good nights sleep

“Oh yes” he replies, “I never have any problem sleeping”

He pauses before the punch line, his delivery perfect, “It’s waking up that I have difficulty with”.

During a lull in the conversation, Tony asks Fred about his favourite member of staff at the home, a young attractive Thai woman who Fred loves to flirt with.

“She helps me with my bath” Fred says

His eyes sparkle with humour as he continues “She runs the water for me. Then she gets in it to see if it is the correct temperature. Then she asks me to join her”

We all start laughing and Fred is delighted. He clearly loves having company and telling stories.

Eventually Tony says he has to go, so we all say our goodbyes to Fred. As we start to leave he calls over to the staff “They’re leaving. Check the silverware”

Outside we thank Tony and tell him how much fun the visit was.

Tony says that the sad thing is, that in five minutes Fred will have forgotten we have been.

We tell him it doesn’t matter. Fred clearly enjoyed every moment.

Leave a Reply to Andy and Graham Cancel reply