The Road to Soppong

Chiang Mai translates to “New City” in English. Hardly an appropriate name for a city that was founded in the 13th century and is filled with over three hundred Buddhist Temples many dating back centuries and a few back to the beginnings of the City.

The original old city is surrounded by the remnants of the ancient city wall and a moat. For centuries these defenses kept out the marauding Burmese and Mongol armies, but have proved less successful at keeping out the invading tourists of recent years. The old city has become a magnet for backpackers, trekkers and adventure seekers attracted by the surrounding jungle, mountains, white water rivers and waterfalls. The smart set rarely venture into the city, preferring to stay in the elegant spas outside, well removed from anything that might involve the wearing of back packs and (heaven forbid) sensible shoes .

I know that you are thinking that at this very moment I am unpacking the Fabulosity Meter in one of those wonderfully decadent spa hotels. But you are wrong. However rest assured that I have no intention of suddenly becoming one of the great travelling unwashed. I have never possessed a back pack, and never will. I do confess to owning a pair of what I consider to be sensible shoes, although I seriously doubt that any serious hiker would agree with that description. I also confess to having brought them with me, but whether I get to wear them is another matter entirely.

My reason for coming to Chiang Mai is to explore the Golden Triangle, the area where the borders of Thailand, Burma and Laos meet. It is a mountainous region, cooler than the rest of Thailand and is one of the largest opium producing areas in Asia. That may be the major attraction for many of the travelers we meet, but it is not why we came. We are here to see the remnants of the Burmese Hill Tribes who crossed the border and call this area home. Little of their culture is left; the appeal of money, cell phones and television having lured the young into the twenty first century, but I would like to see them before their lifestyle disappears altogether. I have read of a weekly market that is held way up in the mountains in a small town called Soppong where the people of the various Hill Tribes gather every Tuesday to sell their produce and their crafts and hopefully make enough money to see them through the next week.

We arrive in Chiang Mai on Sunday afternoon and so have only one night to recover from 27 hours of travel and a 15 hour time difference before venturing into the mountains for the next market. This is an incredibly poor piece of planning on our part. I would love to be able to place the blame squarely on Gordon’s shoulders but as he reads every word and edits out anything of which he disapproves, I am unable to do so.

As it is we have to pick up the rental car at 10 the next morning and drive for 6 hours to Soppong. It is only 120 miles but the road is such that it will take that long to drive it. We have been advised by many not to attempt the drive ourselves, but to take a car and driver. However, the memory of Joginder in India and his bedroom on wheels still haunts us so we set off on our own. When we tell the Chiang Mai hotel what we are doing they beg us to take care.

The first few miles are easy but ahead lies the mountains. Steep and craggy and covered in impenetrable jungle, they remind us of photos of Southern China.

It does indeed take us six hours to reach Soppong, but we stop on the way for a hike into the jungle. Nothing long enough, you understand, to require sensible shoes. You would probably describe it as a short walk, but it felt like a hike to me. However the blood sweat and tears were all worth it when we came across this idyllic setting:

A skinny dip is called for. I strip off and jump in

When we reach Soppong we have to find our hotel. This is not an easy task as there are no street names and no numbers. Soppong is just a small working town the road passes through, with nothing going for it unless you want your motor bike repaired. There is certainly nothing to make the normal tourist even slow down. But as you well know by now, we are not normal. Soppong features a string of road side businesses housed in little more than lean too sheds, a gas station and a post office. There is also a covered market where everything from fast food

is sold. Yes, they really are rubber gloves. At first I thought they were condoms attractively displayed in bulk for the active locals.

What Soppong doesn’t have is hotels or restaurants, but I already knew that.

I had scoured the internet to find a place to stay in Soppong. There was little to choose from and certainly nothing that I would ever normally consider. But I had to find something and the best of a very bad bunch had the the rather charming name of “Soppong River Inn” . It sounded promising. There were a few photos that gave nothing away, except that it sat on a rather high bank over looking the local river. I had visions of somewhere quite charming but the incredibly low cost of a room had me worried. What could we possibly expect for so little money. They did have email and they answered mine promptly, so before I had time to think, the deal was done. All that remained was for us to find it and to see what we had let ourselves in for. Our first thought as we discover it at the end of a narrow lane, is that it could be worse. It has what could be described as rustic charm,

but it certainly isn’t going to get the Fabulosity Meter out of bed. There is a cluster of half a dozen little rooms, simply furnished (and I do mean simply) all spotlessly clean with modern bathrooms and a delightful hostess. What more could we ask for? The answer to that would come later.

We share this charming spot with a couple of other guests who have no intention of making contact, and a thousand mosquitoes who do. We decide to explore the neighborhood to see if by any chance there is some sort of restaurant where we can spend a pleasant evening. There is not. The only option is our River Inn which does boast a restaurant with the rather strange and never explained name of “Seven Elephants”. It is a little more rustic and a little less charming than our room 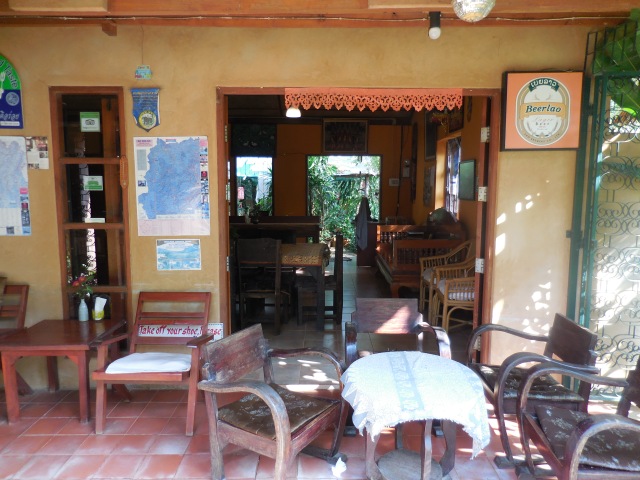 Our delightful hostess tells us that the kitchen closes at 8pm, so we make sure to get there well before that. We do not have to fight for a table. The waitress and the cook both bear an uncanny resemblance to our Charming Hostess. She is a woman of many talents as the food turns out to be simple Thai food but absolutely delicious. Chicken curry, jasmine rice , salad, a huge plate of perfectly cooked tempura vegetables and several beers cost us the grand total of $12. We are beginning to like it here.

Once 8 o’clock has been and gone our Hostess makes it quite clear that she would like us to leave. We retire to our room where a flat screen TV and an “Apple” remote await us. The TV gets one one local channel, but our Charming Host had already explained that we can get Apple TV. What she hadn’t explained was that we can get the logo for Apple TV but nothing else. This does not make for an entertaining evening. We have little option but to retire to bed, which considering our jet lag seems like a good idea.

Whatever the mattress is made of, it does not include springs, foam, cushioning or anything softer than a block of concrete. It is cleverly covered in a standard mattress cover designed to lull you into a false sense of security, but not into a comfortable night’s sleep. It is the longest and most uncomfortable night of our lives. It is also cold – we are after all in the mountains. Our aching and chilled bodies try to rest while we wait for the first fingers of dawn to lighten our room. It doesn’t happen until 6.45. We leap out of bed and into the shower, only to find that we have woken long before the hot water.

We can’t stay in our room any longer. We have come here to meet the local tribes and we know their market starts at 7am, so we make our way into town with high hopes for our next adventure

9 Responses to The Road to Soppong