When we reach the Kinabatangan River, we have to take a small boat to the Probiscus Lodge where we will spend the next two nights. This will be our base from which we can explore the surrounding jungle.

I had made plans to come to Borneo to do just this two years ago and we were booked to do a river cruise into the jungle, then stay at a lodge and explore the wildlife and the remains of the tribal life that still exists here. Unfortunately Gordon got onto the internet and read that we would be facing a particularly unpleasant leech that waits in the trees, and as you pass, it launches itself at you.

The thought of flying leeches was too much for Gordon and he refused to go.

Since then I have been slowly applying pressure and finally got him to agree to this two night stay in the jungle having assured him that the exploring would be done from the safety of a small boat and if we didn’t want to walk in the jungle we didn’t have to. It took a while but he finally agreed.

As we enter the lodge, the first thing we see is a large advertisement.

Gordon, being the trooper that he is, takes it in his stride and even manages to laugh. At least I think it is a laugh. It may be hysteria.

The lodge offers boat rides at sunrise and sunset. Each one lasts about two hours and explores a different part of the river and ventures into the small tributaries where we are enveloped by the jungle. We are lucky enough to have no one else with us. It is just Jeffrey, the boatman and we two in a small skiff . The scenery is beautiful

Jeffrey again surprises us and proves to be an excellent guide. He knows every plant, tree, animal, bird and insect that we see, and can imitate many of the bird calls. The birds are perhaps the most interesting of all, and are certainly the most beautiful.

There were several species of kingfisher, this particular one is the stork billed kingfisher

and many other birds whose names I failed to make note of: 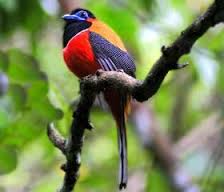 But most of all there are macaque monkeys.

They are everywhere, along the river bank, in the trees and even playing on the roof of our chalet

We watch them, and sometimes they watch us 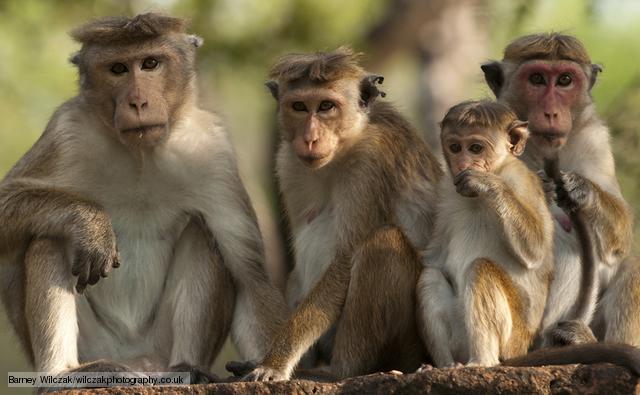 Jeffrey explains that there are two types of Macaque. The long tailed macaque and the short tailed macaque. I will leave it to you as to how to tell the difference.

However the Macaques themselves don’t care about the length of their tails and are willing to have sex with any other macaque regardless of how well endowed it is. This has lead to another species of macaques with medium length tails. It all sounds a little detail orientated to me and probably leads to a lot of tail envy and inferiority complexes within the macaques.

But the main reason for coming here is to see the probiscus monkeys, the wild orangutans and the pygmy elephant. These are much rarer and harder to spot.

The probiscus monkeys tend to stay away from the river bank and like to be high up in the trees. But we do find a family that is prepared to pose for us

The creator, whoever he or she may be, has played a very unfortunate trick on the probiscus monkey. It is blessed with the most unfortunate nose, an ill fitting toupe and a silly grin:

And that is just the female

The male fares far worse. The appendage on his face is enormous and most unsightly, and it is no wonder the poor chap looks so sad. 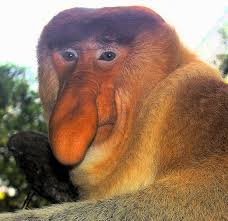 And if that isn’t enough for the poor creature to bear, he is also saddled with a huge pot belly and a rather small shiny pink penis, which this chap seems particularly proud of

Perhaps it is rude of me to mention that last item, but one can’t help but think that an enormous penis ought to go along with that nose.

To save this blog from going any further downhill, I will move on to the orangutan which being endangered was much harder to spot. It wasn’t until the third river trip that we finally see one

And there our luck runs out. We never manage to see a pygmy elephant, which stands about 6 to 7 feet tall (a regular elephant stands 10 to 12 feet tall), has a babyish face, a long tail and a more rotund shape, making it positively adorable. But it refuses to come out for a cuddle. Jeffrey finds some recent tracks of the elephant at the river’s edge, but that is as near as we get.

Nor do we see one single leech, flying or not, for which Gordon is forever grateful. Perhaps now I can persuade him to return for a week or two.