We leave the wild jungle of Borneo for the concrete jungle of Kuala Lumpur.

When we enter our hotel room and look out at the view, the Fabulosity Meter finally registers some excitement

Gordon did not chose the hotel, by the way

But it is short lived. We are here partly for Gordon who loves big cities and all the excitement they bring. But on that score Kuala Lumpur is a disappointment.

It is a huge sprawling city with clumps of ugly highrises sprouting like weeds wherever you look. Some are old and ugly with washing hanging out of every window, some are new and shiny and still ugly. Size and speed rather than style seems to have been the architects remit.

It is a city with only one thing going for it, or maybe it counts as two. And we have already seen that from our window.

There are no historic buildings or “old town” to explore, no notable religious buildings. The only places the guide books note are  a well respected Museum of Islamic art, a bird park and a Chinatown which the developers have yet to raze to the ground. That appears to be it for places of interest, museums and culture, unless you count the Chinese Drummers celebrating their New Year in the Mall. Precious little to attract tourists to a City of this size or to make moving to Kuala Lumpur sound appealing.

The city, recognising the problem, decided they needed a major attraction. Building the tallest towers in the world might do the trick. And to an extent they were right. The towers seem to be the only reason people choose to go to KL, and the city has certainly striven to make the most of them, carefully developing the surrounding area to give a sense of excitement and class. The city centre, such as it is, has been built round the twin towers. In front of them is a large attractive circular park with plenty of trees to attract the birds, a jogging track to attract the young and fit, and an enormous children’s water park to attract the families. The centrepiece is a small man made lake which lights up at night with a magnificent Vegas style dancing waters show. Around the park there is the Mandarin Hotel, a convention centre, a Traders Hotel, a sprawling building site which will be the future home of the Four Seasons Hotel and a huge impressive and very high end shopping mall with every designer known to woman, selling their wares at prices higher than they can be found in the States.

Outside of this circle there is just a sprawling mass with little to offer. But KL and Malaysia do impress us in ways we had not expected. Malaysia is a melting pot of Chinese, Indians, Malays, Christians and Muslims. And they all get along without any problems. And the country is wealthier than we thought. The average Malay earns three times as much as their average Filipino neighbour. There is clearly a burgeoning middle class. The roads are good, and the motorways are excellent. There are good restaurants offering every sort of cuisine imaginable.

While we are staying in KL the Malaysian Government announces that it wants to become the business and banking hub of Asia. It is approaching this goal in the same way as it approached attracting tourists. With huge and impressive buildings. They have already earmarked the area where they plan to develop twenty five impressive business buildings over the next ten years. We get the feeling that this new business park will work just as well, as the Twin Towers. Build it and they will come.

But none of this makes KL an interesting place to stay for more than a day or two.

I now understand why, when we told a fellow traveler that we were going to spend five days in Kuala Lumpur, he simply said “Why”

It also explains why the staff in the hotel always ask “What have you done today? Did you go shopping?”

If you are a shopper then KL will keep you occupied for a few hours. Otherwise it’s the Twin Towers and it’s all over.

It is all over for me rather quickly .

After three days of staring out of the window at the amazing Twin Towers we decide to make a break for it.

We rent a car and drive to Malacca, a town on the coast about a hundred miles to the south. Our hotel there certainly knows how to make us feel welcome: 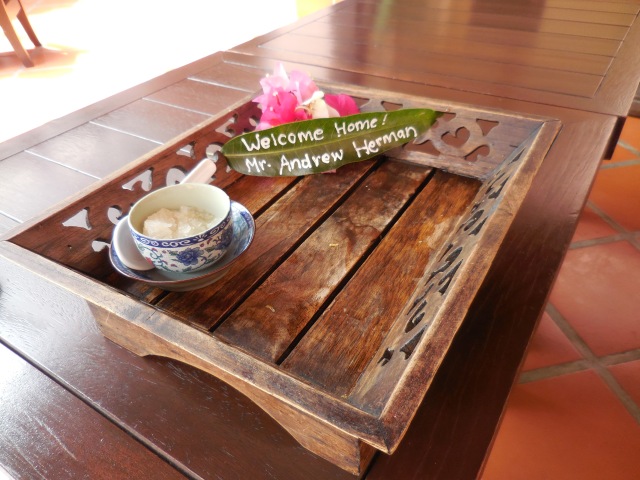 They even have a little floral display just for us

Malacca is a fascinating place with a rich background reflected in its architecture, due to periods when it was ruled first by the Portuguese, then by the Dutch and finally by the British (more pink on the map).

The centre is full of narrow streets clogged with tourists and lined with houses and temples  built by the Chinese merchants a century ago. 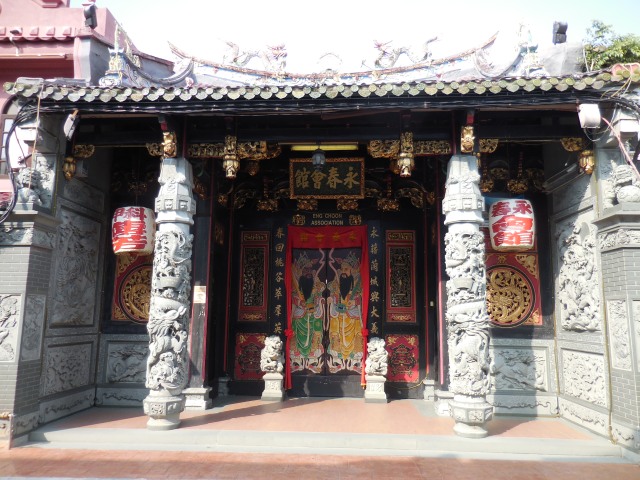 Many of the merchants were clearly wealthy and decorated their houses with beautiful art nouveau tiles and painted plaster reliefs. Sadly not all of them are well preserved. The city had a problem with passers by chewing beetle nuts and spitting their vile red spit wherever they went. The city solved the problem of the unsightly results by painting many of the historic buildings an unpleasant brick red color. But, today some of the more decorative buildings are being carefully restored and turned into trendy boutique hotels.

There is a river running through the city that used to be known as the dirtiest river in Asia, but great efforts have been made to clean it up and it is now lined on both sides by a charming river walk with cafes and restaurants which becomes the focal point at night.

The old centre of town is small and easy to walk, but there are always the pedicabs waiting to take you for a ride (literally and metaphorically), and at night they are even more appealing

It is a fun place to be after Kuala Lumpur