Fanning Island, the Republic of Kiribati

One thousand miles south of Hawaii, in the middle of nowhere, lies a tiny atoll called Fanning Island. That is our next stop.

It is part of the Republic of Kiribati and if you want an idea of just how remote it is, then all you need know is that the nations capital, Tarawa, is over 2000 miles away and there is nothing between the two except the open sea. The atoll is shaped like a foot, with the outline as land and the rest a huge lagoon. The land is only a couple of hundred yards wide in places and the highest point is 5 feet above sea level. The rest of the terrain averages only two to three feet in height. The atoll is blessed with an average of eighty inches of rain every year (one of them arrives while we are there!), and the temperature remains in the 80’s all year round. This makes it a tropical paradise, green and lush with palm trees everywhere. In fact it is only the palm trees that grow to 90 feet that makes the island visible from a ship.

But once spotted, never forgotten. It is a beautiful place

Morning glory vines cling to the trees. Breadfruit, bananas, pineapples and figs grow with abandon. There is no power grid, no plumbing, little work and little agriculture. This leaves only one thing for the locals to do. And they do it with great success. The island has 1900 inhabitants and I would guess about 1500 of those are children! There are children everywhere.

Occasionally they are alone;

But mostly they just hang out in little groups: 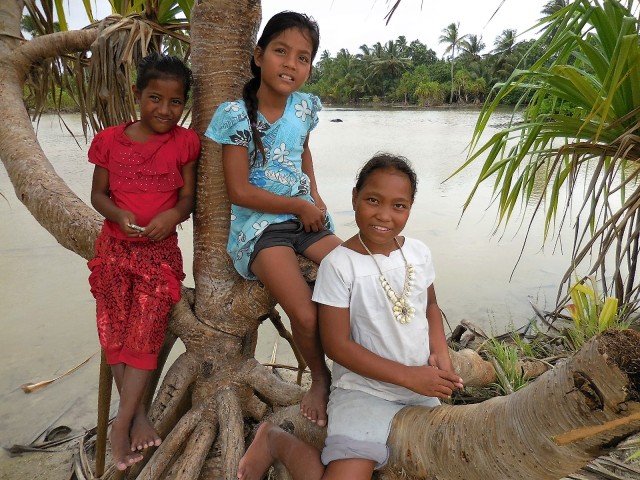 Where else can they hang out?

One muddy lane runs round the atoll

others not so much

Most of them come with a pig tied to a tree

This one has a little piglet. Which is not good news for mama pig. She has given birth to her replacement and she will next be seen on a roasting spit.

Food on the island is plentiful. They have an endless supply of fish, and coconuts.

They have giant land crabs:

They have all the fruit that grows wild . They have the occasional tiny vegetable garden nurtured with soil shipped in from Hawaii. They have their pigs and chickens. And when all else fails there is the local restaurant: 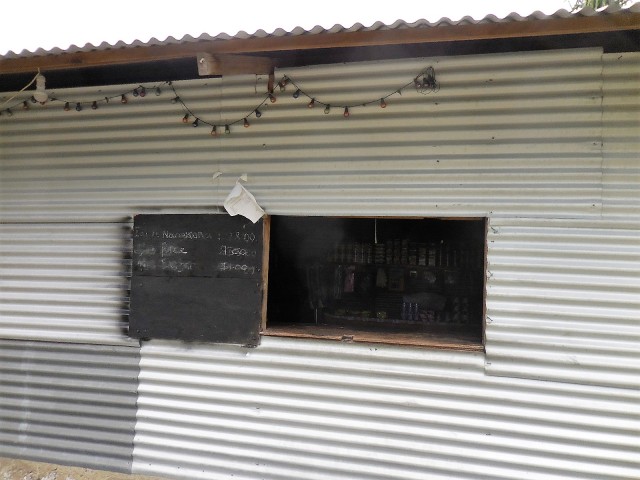 Tourism is new for this tiny atoll, but the locals are embracing it eagerly. They have set up a market where they sell what they claim are their handicrafts but they all are so similar that Gordon is convinced they come from China:

They also quickly learned that not only would many of the female tourists love to have their photo taken with semi naked tanned and fit locals, but they would be willing to pay for the opportunity. The occasional foolish old man will also do the same

They even have a local tour bus. When we arrive on the island we are told that the tour costs $10 , but as time passes they quickly lower the price to $7:

We however would rather explore on foot. We spend several hours wandering along the road , meeting the locals.

Every one of them is friendly and happy to stop and chat. They show us their homes and tell us what they are doing. All of them seem well fed, healthy and very happy. They are dressed simply but the entire time we are on the island we never see one shoe. Everyone , young and old, goes bare foot.

We are looking for the village school. We know there is one and we have read they are always desperate for supplies, so I have brought with me a bag full of toys and school supplies. So now you are beginning to understand why we started off with 7 bags! We are now down to 6. Or will be when we find the school

Eventually we find it, and it seems the kids have been anxiously waiting for us:

The teacher welcomes us into the classroom and asks where we are from. When we say we are from England we are invited to join in the English class in the next classroom

At the end of the class they all sing twinkle twinkle little star for us, first in English and then in their local language, Gilbertese.

It is an incredible way to end what has been a wonderful day.

One of the frequent questions I am asked is why do we go on cruises.

Fanning Island is why. How else would we ever see these remote places. There is nowhere to stay on the island, there is no way of getting there other than by ship. It is one of the remotest places on earth, and it is home to nineteen hundred of the most delightful and friendly people you could wish to meet. The memory of this day will stay with me forever.

And the thought of what will happen to this wonderful place after a few more years of global warming will haunt me for just as long.

Finally I would like to return you to the boat for a moment. I had mentioned that this is he whitest of cruises that we had ever been on.

Well at our stop in Hawaii a tiny but very noticeable splash of diversity joined the cruise, and here they are

It must be said that the rest of the Crystal users are having a very hard time knowing what to make of them. The above photo shows them going in to dinner on what is described as a “country casual” evening.

6 Responses to Fanning Island, the Republic of Kiribati