Bali and the Kissing Festival

You might remember I left you on Nyepi (New Years Day)  with the promise of no noise, no fun and no sex for the entire day

All that is about to change on the day after New Year when the islanders, tired of one day of celibacy, try to catch up on what they have been missing. The Omed-omedan Festival is another huge celebration full of fun and chaos. It is the “Kissing Festival”

Anyone between 17 and 30 who is single can participate. There is a palpable air of tension as the participants arrive in the centre of the village. They are organised into two groups, with all the men lined up on one side of the street and all the women on the other. Then on a given signal they approach each other in the centre of the street and the young men grab the women and kiss them. Excitement often seems to get the better of the young men and they can be rather forceful. The crowd, knowing that young singles can get a little over enthusiastic, have buckets of water which they then throw over the participants. It is like a huge water fight with sex thrown in. What could be more fun than that. 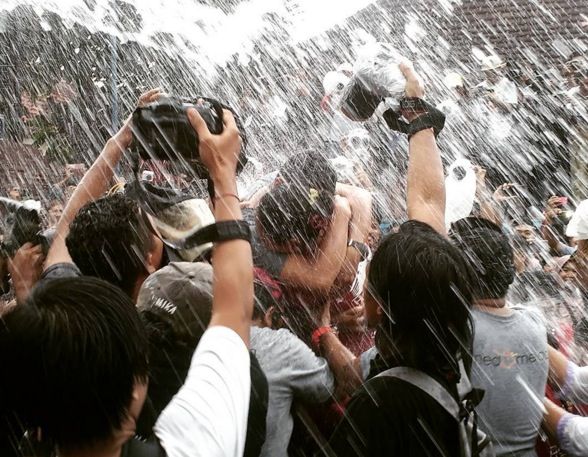 In case you are feeling sorry for the young women, please remember they are just as willing participants as the men and often throw themselves wholeheartedly into the celebration

But it is the men who pick the women, so not all the women enjoy the experience 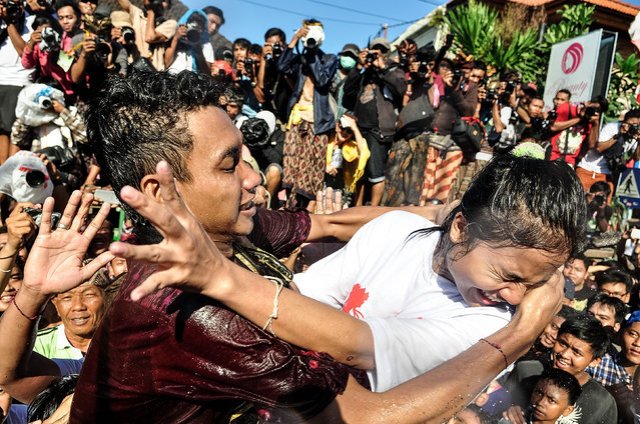 Before the fun began the participants gathered together in prayer. They were apparently praying for safety which hopefully works and avoids the expense of condoms.

The festival has actually become an important meeting ground for the young, and many relationships have started at Omed-omedan, which only proves that being a good kisser is important and that joining e-harmony.com is a waste of money

A few years ago the Indonesian government banned this festival as it goes against their strict laws of decency as well as the tenets of the Muslim Religion. However after the ban went into effect, the death rate in the village where the ceremony is held increased dramatically around the dates when the festival would be held. You might think that this was just a little superstition, but the Balinese were actually able to present figures to the Indonesian government that proved this fact so dramatically that the ban on the Festival was lifted and the kissing now continues.

A true story and surely one that could only happen on this beautiful island, proving the power of love, or at least a good kiss

1 Response to Bali and the Kissing Festival