Pigging Out in Bali

Every home should have one. Or so Bali believes.

Not the male chauvinist variety but the cute four legged variety that tastes so good. 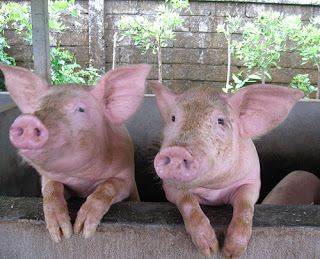 Fortunately for the pig, the temple priests, local mediums and many of the traditional dancers are forbidden from eating pork. This might give you a warm and fuzzy moment when you think the pig is going to have a lovely life in Bali.

Treasure that moment, because nothing could be further from the truth

While a few of the more spiritual inhabitants won’t eat pork, the huge majority of the population are salivating over the little oinkers, particularly when they are young and roasting on a spit .

Pork is the favorite food of nearly all Balinese. There are many restaurants that serve nothing but pork. Every part of the pig you can imagine, cooked many ways but mostly barbecued.

The local native pig is black in colour and can be seen around most Balinese homes. Thirty years ago the pink western pig was introduced into the island. The Black Balinese Pig found these young pink creatures rather alluring and hot with desire, jumped on them whenever possible so widening the gene pool. If they thought no one would notice this intermingling, they were wrong 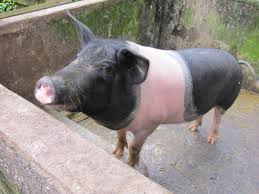 Bali, as you may have realised by now, loves a good festival, and there are some really good festivals that are spectacular to look at and can be a lot of fun. But not all their festivals are this way. One in particular is a little gruesome and it involves the pig

I am now going to issue a word of warning. If, dear reader, you are one of those people who are somewhat sensitive about the way animals are treated, you might prefer to stop reading right about now, and wait for the next blog

This festival starts suddenly in the middle of the night. If you are lucky you will sleep through it blissfully unaware of what is going on. If you are less fortunate you will be woken by something that sounds like hungry babies crying really loudly to be fed.

Soon the crying is replaced by terrible whines and then finally there is the scream of death.

If you are unfortunate enough to be listening to these horrible sounds you are hearing the Penampahan Festival, or the ‘day of slaughter”. Strictly speaking it is not a day, but a night of slaughter and it is pigs that are being slaughtered. A lot of pigs.

This “day of slaughter” precedes the annual Galungan Festival when three terrible demons are thought to come down to the middle world. Their presence has to be exorcised by the slaughter of pigs in order to allow the ancestors to visit the family temples.

As almost every house has a family temple, a lot of pigs need to be slaughtered.

This is not the only time the poor pigs are slaughtered . They meet a similar fate at various other events when exorcism is needed. But the pigs are kept for the more important festivals. At other times chickens and ducks are slaughtered. Not only do they slaughter these poor birds but they humiliate them by only doing it at the less important festivals. The Balinese people with their Hindu religion are known for being a gentle loving race, and yet that very same religion turns them into blood thirsty animal killers at the turn of a festival.

The Penampahan Festival occurs between 2am and 4am. I can understand that the animal rights activists may have slept through these Festivals, but where are they when the pigs are being rounded up. That is not a pleasant process either, especially if you are a pig

First of all the pigs have to pass a size test. The pig must be between 4 and 9 months old and weigh at least 100kg or 220 lbs. What is about to happen to them should be enough to make them go on enforced diets, but once a pig, always a pig.

Having successfully weighed in they then have to be taken to the butchers.

There are two ways the pigs are delivered in Bali. The first is rather ignominious for the poor animal

Presumably this has a lot to do with the expression hog tied .

So a more efficient method was invented which involves forcing the pig into a specially made basket cage where it has no room to move. 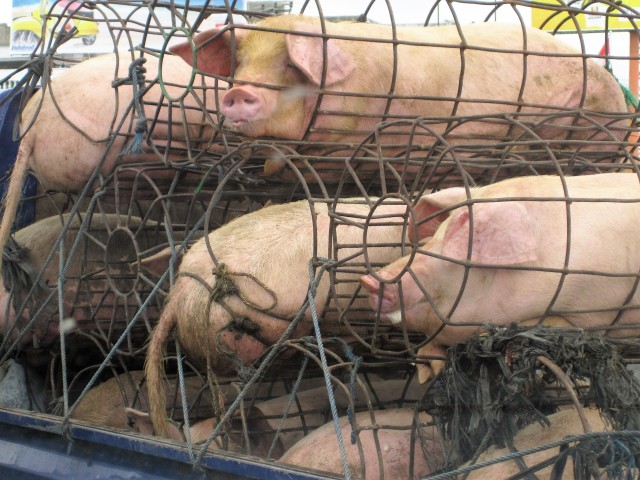 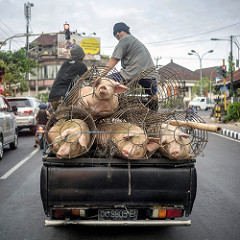 Dear readers, here comes a second warning. If you are feeling a little squeamish already, stop reading immediately. It is about to get much worse.

Once the pigs have been delivered, they are taken out of the basket. Four men then hold the pig steady (one man takes each leg) and a fifth cuts it throat. It is then that the squealing becomes really hard to bear.

The blood is then collected as it runs from the wound and used later in the preparation of a popular Balinese dish called red lawar. I did warn you that almost all parts of the animal are eaten.

The pig is then prepared for the barbecue. Its belly is cut open and cleaned. Then it is packed with stuffing, herbs and leaves. Next a huge wooden skewer is inserted into its anus and pushed through until it comes out of its mouth. At this point the pig is probably grateful that it had its throat cut. Finally its belly is sewn up.

It is roasted over a fire of dried coconuts for 90 minutes, then a mixture of coconut oil and tumeric is rubbed over its skin to make it shiny and crisp . It is then returned to the fire and cooked until the skin begins to sizzle, the aromas begin to tantalize, and the chef begins to salivate.

There is then 200lbs of the most delicious pork you have ever tasted waiting to be eaten.

4 Responses to Pigging Out in Bali