Kyoto, Japan, and its many charms. And did I mention Geishas?

Westerners believe that nothing comes from nothing. A simple concept. An absolute concept. But the Japanese don’t believe in absolutes.

The Japanese believe everything comes from nothing. A somewhat more complex concept

They believe in the importance of emptiness.

Which explains why the thirty three rooms we are touring in the Ninomaru Palace in Kyoto are completely empty. After the third room I am wondering why we have paid good money to see this. There are signs telling us what each room was used for, but each room is the same and each room is empty save for the tatami mats (plain rush mats) on the floor. There are, we are told 800 tatami mats in this building, a fascinating fact, but each one appears to be identical to the next. I am sorry to say that once I have seen one tatami mat I have seen them all.

The Ninomaru Palace was built at the end of the 16th century and into the 17th century and is a famous example of the Edo style of architecture and design. As all the rooms look the same and a bedroom is identical to a reception room it is hard to grasp the Edo style. The rooms only differ in their wall decorations. Every wall has a scene painted on it and every wall is different. Photos are not allowed but I can show you an example: 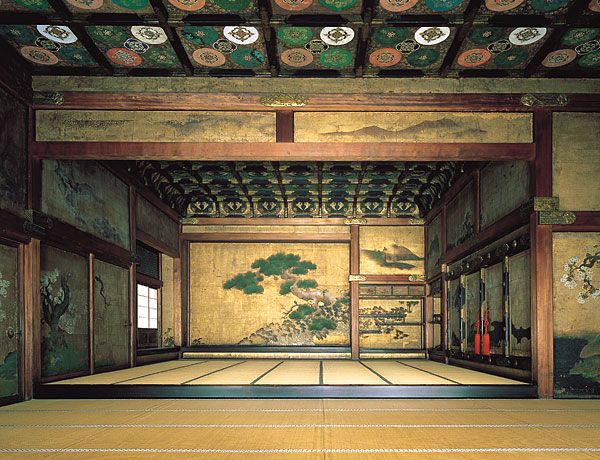 The room is empty so that nothing will detract your attention from the purpose of the room. But then every wall is covered with the most beautiful stylized paintings that demand your attention. Plus all the walls are made of paper, or shoji screens or papered sliding doors, all of which allow you to hear everything that is going on in the rooms around you. So even without the painted walls, ones attention would be distracted by the conversations going on in the neighboring rooms. And let’s face it, eavesdropping is always a fascinating and time consuming distraction. And less fascinating but equally distracting would be the sneezing, coughing , burping and farting that you could hear.

The importance of emptiness is not working for me.

But Kyoto is. This city fared much better than Nagasaki, coming through World War ll virtually unscathed, leaving some mesmerizing castles, palaces , shrines, gardens and neighborhoods untouched and ready for exploration

The Ninomaru Palace is perhaps the most significant of all sitting in the grounds of Nijo Castle, with it’s imposing entrance: 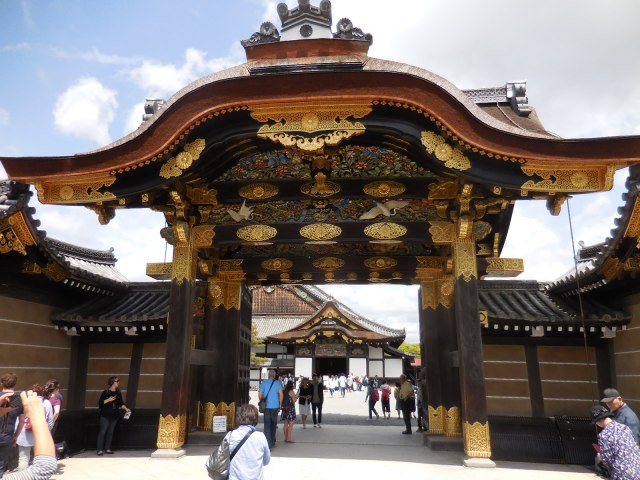 and its beautiful gardens

But for crowd appeal, nothing can beat Kinkaku, something we discover as we attempt to walk down the street leading to this temple 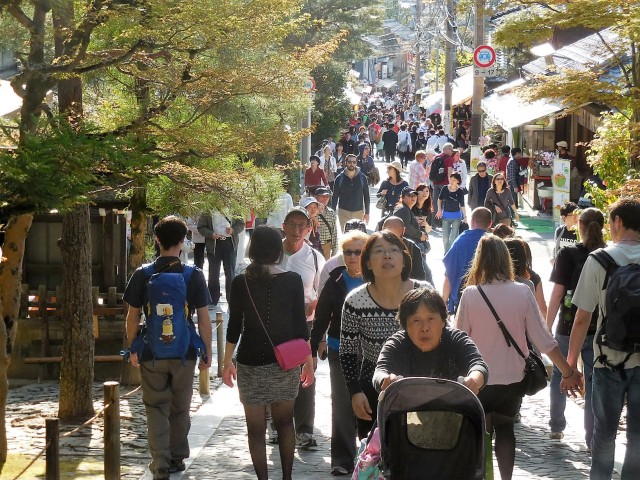 Built in 1398, the top two levels are completely covered in gold leaf. And nothing attracts a crowd like a lot of gold. The interior too is all gold, but maybe that is too much of a temptation as tourists are not allowed inside

But all that gold is not the only attraction. The setting is beautiful too

The gardens themselves are actually  listed as a National Historic Site, partly because of their beauty and partly because some of the rocks carefully placed around the gardens were donated by various provincial lords. So apart from enjoying this beautiful place I also learn an important lesson:  a rock is the perfect gift for someone who has everything. A useful piece of advice if you happen to have a friend who owns a house made of gold. Sadly I don’t.

Kyoto may be famous for its temples and gardens, but it also has a district that is perhaps even better known. This area is called Gion 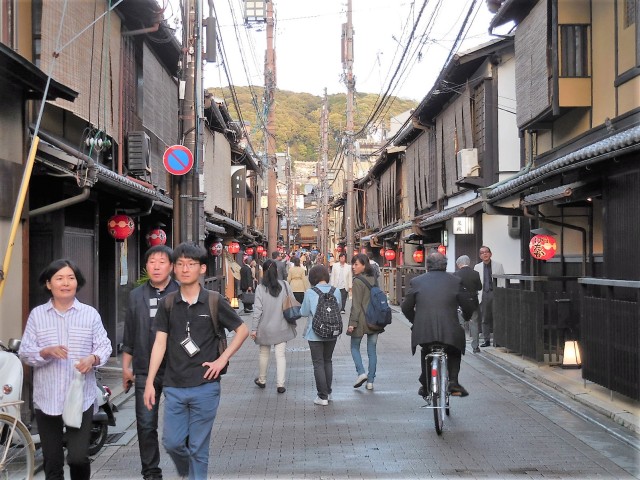 It is an appealing neighborhood with its narrow streets and ancient wooden buildings.  A small canal adds considerably to its fabulosity rating

But it boasts one other attraction that is the main reason for people flocking to the area. It has Geishas. High class, expensive Geishas. The best that Japan has to offer. And Japan has a lot of Geishas to offer, or so I am told,

So Gion is packed with people enjoying a totally different cultural experience, only proving what we already know. The average tourist can only be inspired by so many temples and gardens in a day before seeking inspiration in other more worldly pursuits.

Gion was developed in the Middle Ages to accommodate the needs of travelers coming to visit the adjacent Yasaka Shrine. Guest houses and restaurants were built but the area didn’t thrive. Something extra was needed to persuade the visitors to stay and to part with some of their hard earned yen. Nothing is written as to why it took the locals so long to learn what that something extra was, but it was a couple of centuries before sex reared its money making head. It was a lesson slowly learned but eventually Gion became one of the most exclusive and well known Geisha districts of Japan. So exclusive did the area become, that the Geisha girls no longer wanted to be called Geishas. They preferred the name Geiko which means “a person of the arts”.  A little misleading perhaps, as it makes no mention of what arts the lady in question excels at, but the customer liked the little extra excitement it gave the transaction, and the ladies liked the little extra refinement it gave them, and no one was crass enough to point out that if it walked like a duck and it quacked like a duck, then ………….

The 21st century has brought so many changes to the world, but not to Gion. Many such ducks still ply their arts in Gion to this day

The exclusive tea houses are still here, the wooden facades remaining the same as they did a couple of centuries ago adding to the plentiful charms of the neighborhood

These are not your ordinary tea houses. Tea is not all that is on offer, but if it is all you want it will set you back much more than you might expect. In Gion these traditional establishments are often private and always exclusive. They are where the samurai of old or the well heeled tourists of today, have been and can still be entertained by Geiko in a very very exclusive manner. In this context the word “entertained” can, if you are lucky, cover a multitude of sins but will include such delights as cocktails and conversation , music and song, dancing and whatever other arts the Geiko of your choice has in her repertoire.

The Geiko, easily recognised in their costume and white face, can still be spotted at night as they move through the streets going from one engagement to another 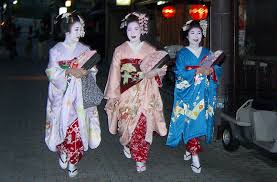 These ladies are charming and lovely and are at the top of their trade. The tea houses they work from are also charming. The amount of money they both command has not gone unnoticed. Other businesses have moved into the area taking advantage of the appealing buildings and their well heeled customers. Exclusive restaurants and design shops have opened everywhere adding a new respectability to Gion.  The canal area in particular has given these new entrepeneurs a great opportunity to display their design aesthetics

Gion is quite lovely and the Fabulosity Meter definitely approves, but as we look at prices in the restaurants and design shops, we realise we can afford neither.

We don’t look at the prices of the Geiko

But dear readers, if you are looking for a Geiko and find the price too high, Kyoto offers alternatives.

But hurry, she is already taking a call

5 Responses to Kyoto, Japan, and its many charms. And did I mention Geishas?