From China it is a mere 450 miles to Japan

Physically so near, but so far removed in every other way

The Japanese people are small, neat and spotless in their appearance. They are polite to a fault and form orderly queues for everything. If you stop and pull out a map, they will ask if you need help. They are always friendly and often approach with a smile, anxious to meet us even though they speak no English. They never spit or drop litter. They do not chase us down the street begging us to go to their store and they never try to sell us something we do not want or have shown no interest in.

Not one of those things can be said about the Chinese, except perhaps that they are small, although even their physical stature seems to be growing as they threaten world domination.

On August 9th, 1945, a B29 bomber named “Bockscar” took off from the Mariana Islands. Its target destination was Kokura, an industrial city on the northern coast of Kyushu Island, The pilot circled Kokura three times, but the cloud cover was so thick he couldn’t get a visual sighting, so he flew on to his secondary target, Nagasaki. A break in the cloud cover there gave the pilot a clear target and he dropped his fatal cargo from a height of 30,000 feet. With a blinding flash of light, a thunderous roar, and that now indelible image of the mushroom cloud, the world’s second atomic bomb exploded over the northern part of Nagasaki.

It devastated the city.

73,000 people were killed in one day. That was almost a third of the population of Nagasaki.

Another third were injured.

The deaths were horrendous, the injuries more so.

Seventy one years later we are sailing into the port of Nagasaki with mixed emotions. Is this really a place for cruise ships to offload thousands of gawking tourists? The answer, we were glad to learn, is yes.

Nagasaki sits at the mouth of a river, with water on one side and green mountains on the other three.

The setting is quite beautiful 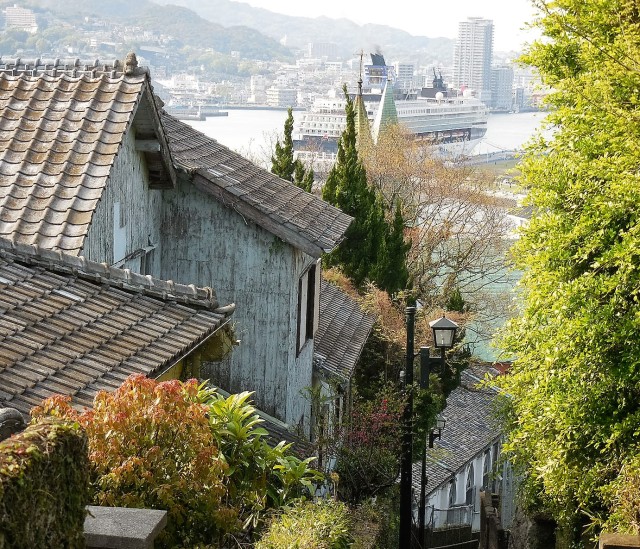 Unfortunately much of the city isn’t. 120,000 people were left homeless after the bomb. The necessity of rebuilding as quickly as possible with the limited funds that were available means much of the city is now defined by the ugly architecture of the 1950’s and 60’s. But a few charmingly attractive neighborhoods did survive and the discovery of them is made even more enchanting by the circumstances of their survival.

There are some delightful narrow streets lined with tiny Japanese houses that have become tourist attractions. Here we experience first hand the amazing design aesthetic of the Japanese. 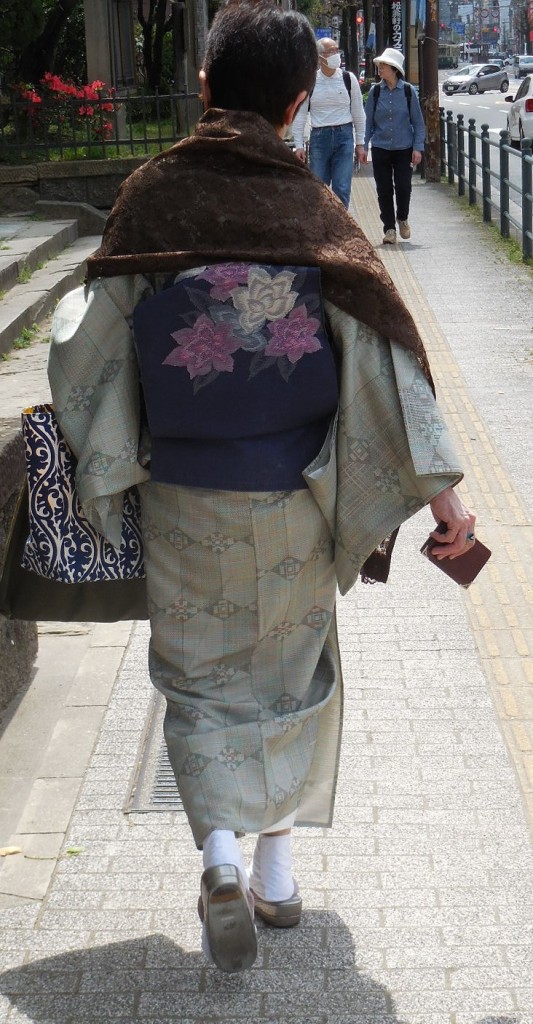 Many of the these little houses have been turned into shops. The rest of the world would fill these shops to the rafters with cheap knick knacks, jewellery and souvenirs, much of it overflowing on to the street and all of it designed to appeal to the lowest common denominator. Or in this case the lowest common Holland America tourist, of which, it must be said, there are many.

But this is not the way of the Japanese. Here the merchandise is stylish and pleasing, arranged artfully on light wood shelves. Clothing hangs beautifully on the racks with space between each article. The shops may be tiny but nothing is crowded. The classier the shop, the less merchandise there is, the shop keeper relying solely on the design aesthetic to attract and draw you in. This for instance is a shop selling cookies, but it is just about as far removed from Mrs Fields as it could be: 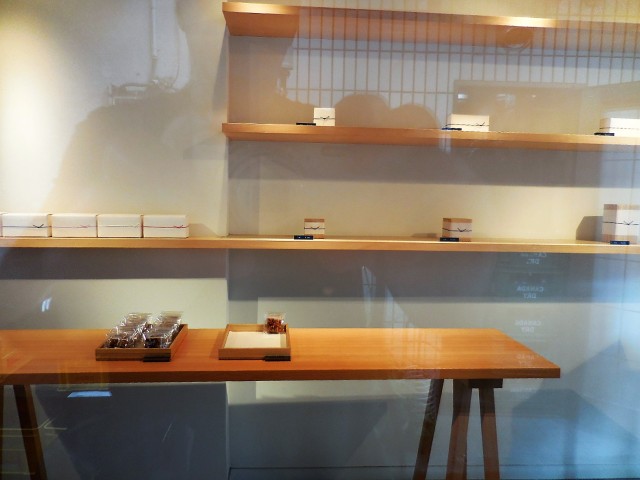 (with apologies for the reflections in the window)

Another shop catches my eye. The window display is no more than a length of exquisite fabric hanging from a black bamboo pole. Inside the walls, perfectly clad in fine rush matting and accented with black strips of wood, are totally bare. The small but immaculate room has only three things in it, a small antique tansu chest, an elegant black desk with legs carved to look like dragons, and a narrow glass cabinet with two pairs of Japanese slippers on one shelf,a tiny evening bag on the other, and a china figurine of a lady in a kimono standing on top. A length of black fabric with a beautifully elegant white design hangs on the back wall.

And that is all there is. Everything about the space suggests class and elegance, but nothing suggests what is for sale.

But the concept works. Equally intimidating and intriguing, the space draws me in.

The black fabric on the back wall is carefully drawn aside and a slim middle aged man in a perfectly tailored and very expensive black suit emerges. He bows and greets me with a smile. I explain that I am just intrigued by his beautiful shop. He seems delighted. He explains that he makes kimonos to order and everything is done by appointment. In any other city in the world he would sniff at this tourist in shorts and T shirt and throw me out. But here, in Nagasaki, Japan, he is all charm, and seems just as interested in hearing about my life as I am about his.

Mr Hayasaki is all charm too. But we meet him under completely different circumstances. He was 14 years old when the atomic bomb was dropped and is one of the few who is still alive today to talk about it. Now at 86 years of age, he spends most of his days standing in the grounds of Nagasaki Peace Park, the memorial park built below the spot in the air where the atomic bomb exploded. Nagasaki may have its charming spots but this memorial is the heart of the city. This is where every city tour either starts or ends. This is where your heart stops beating for a moment, where your breath catches in your throat and your voice cracks as you think about the terrible inhumanities that man is capable of inflicting on man.

Mr Hayasaki stands beside his own personal memorial greeting everyone who passes by. 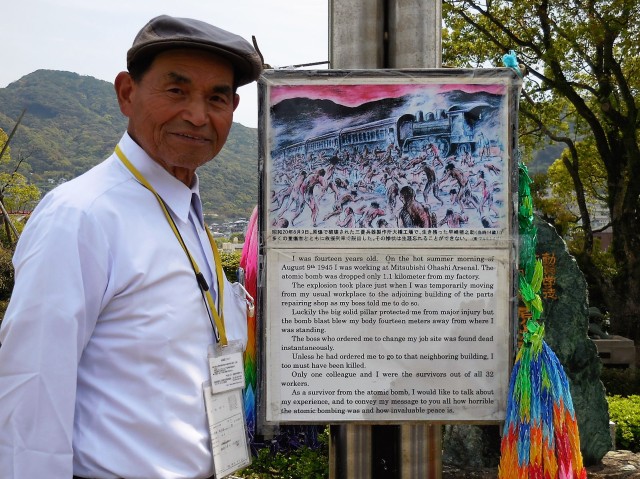 He is our one breath of hope. He lets us know that there are people on this earth, wonderful people, who can absorb every wretched, horrific experience that life might throw at them, and forgive. But you have to remember in order to forgive.
And Mr Hayasaki remembers.
He recounts his experiences to anyone who would like to listen. He spares no details of the horrors that he saw. But he harbors no anger. He greets everyone with a smile, his face open and cheerful. He is there as a reminder that peace and goodwill are always the better options.

He stands next to a small sign that says far more in a few short sentences than I could ever say: 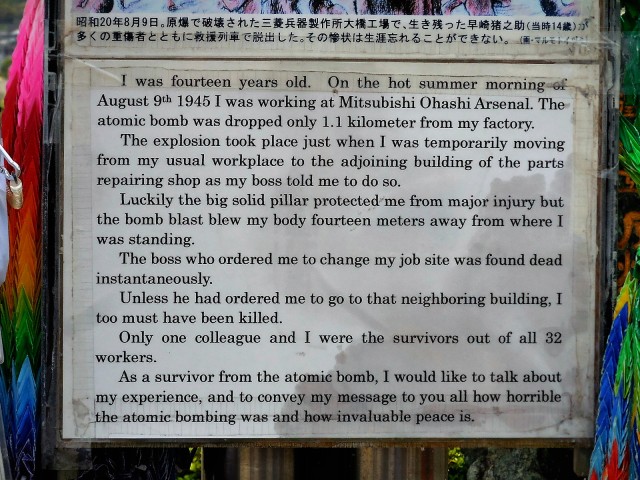 He defies his age, looking many years younger than his actual 86. He shakes hands with everyone but has a particular twinkle saved for the ladies. He takes their arm and invites them to sprinkle water on his flower arrangements as a sign of peace. Then he smiles for the inevitable photo. His disarming charm and unexpected ease moves us more than any statue. Mr Hayasaki is a local treasure who should be a world hero. He gives us hope that, although bombs may win a war, peace can win the end game.

That hope is also passed on by the children of Nagasaki. They may not have lived through the horrors but they will never forget the importance of Mr Hayasaki’s message. The children all make oragami cranes out of colourful paper, and display them around the park in what has become known as the Million Cranes of Peace. 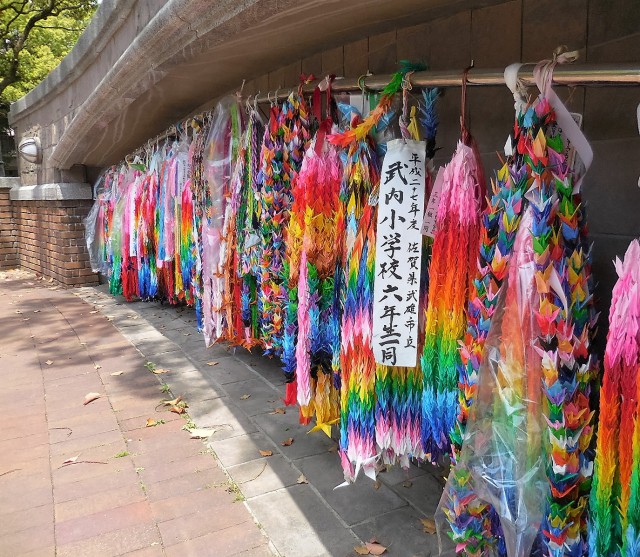 They bring a lightness to this otherwise dark monument. 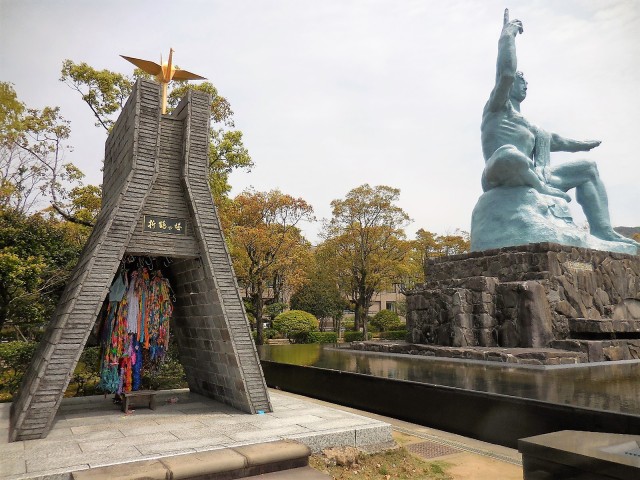 On a lighter side, our day in Nagasaki also brings me the second “Passenger quote of the week”.

We start our day by taking one of the local trams. We can buy a day pass for $4 and decide we might get a good overview of Nagasaki by taking the tram as far as it goes. Unfortunately we are joined by another couple from the ship who have the same idea. The husband is 72 and looks as if he won’t make it to 73. He is extremely overweight and red faced. He struggles to get on the tram and wheezes with each breath. He drops his entire weight on to the seat opposite us with a huge sigh and starts talking. He has nothing interesting to say, but that doesn’t stop him. He is Canadian. His wife is Asian, probably 20 years younger and rather plain. She says nothing and stares off into the middle distance, paying little attention to her husband. We wish we could do the same, but he has us pinned in. We wonder if she speaks English

Finally he waves his arm in her directions and says

“This is my Chinese Take Out. And can you believe my luck, she actually came with a credit card”

Her mouth forms into a tight smile, but there is nothing in her eyes that suggests amusement now or at any time during her marriage.  She has heard that line a hundred times. And yet she is still there. She may have to be. But we don’t. We get up and leave the tram.