Is there an auspicious day for death? I guess no one will ever know. But the Hindus certainly view the day of one’s death as a vitally important day.

They believe that their bodies are made up of five natural elements and that when they die they should be cremated so that the elements are released from their body and can be returned to this world. In the north of India it is their devout wish that the ashes which remain after cremation should be returned to Mother India, the Ganges.

Tamil Nadu has the Cauvery River, which Hindus believe is the second most holy river. Legend has it that it was once connected underground to the Ganges. The bathing ghats on the banks of the river are the south’s version of the Varanasi bathing ghats.

The Tamil Hindus treat the Cauvery much as the northern Hindus treat the Ganges and many devotees come to the Cauvery every morning to bathe. They believe that each and every one of them is allowed and expected to make mistakes both big and small in their lives, but if they immerse themselves in the river, all those mistakes will be washed away.

If the River could wash away the very few mistakes I make, I too would rush to its shores for a dip.

However, the Cauvery suffers from one small drawback that the Ganges does not. It is dry for ten months of the year. 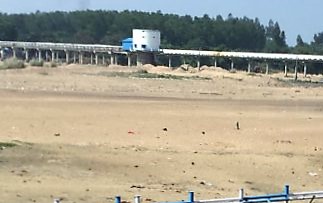 One imagines this would present the bathing Hindus with a small problem. But the locals have learned that a little flexibility solves the problem. Showers have been set up on the banks of the dry river and the observant Hindus seem to have no problem in believing that this will cleanse their spirit just as well as a dip in the actual river will. And if it doesn’t ….. well it’s a great place for a wash and to do your laundry. 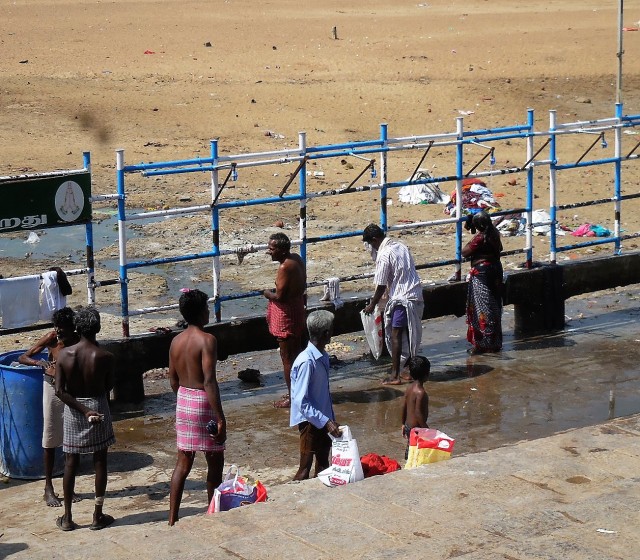 But, just as in Varanasi, these ghats are not just for bathing. This is a very holy place where family members and friends come to grieve and to give their loved ones the perfect send off. Unlike Varanasi this does not include burning them on a pyre and throwing the ashes into the river. The Tamils view that as barbaric, which is perhaps a true sign of enlightenment. However many of them bring just a few ashes of the departed loved one and discreetly scatter them in the river. Tradition dies hard.

However while they accept that throwing bodies and ashes in to the river is environmentally disastrous they have no problem in throwing large amounts of food in the river. They do this because they believe it will accompany the deceased on his journey and insure that he won’t go hungry. It does seem that there is one fatal flaw in the logic here, that being of course that there is no water in the river to send the offering on its way, but who am I to point that out.

We have come to these bathing ghats to see for ourselves what happens. The first thing we encounter is the inevitable elephant, blessing all comers in exchange for money

As we pass by the elephant and its trunk full of good wishes, we hear the mourners before we see them. There are sounds of wailing and crying, mixed with shouts and cries. There are crowds of people, some sitting, some standing, all looking rather glum. We realise that what the relatives can do here, water or no water, is grieve.

Just like a wedding, the size of your grieving group speaks volumes about who you are. So does the amount of noise you make. We spot one elderly lady clearly upset and sobbing on the shoulder of a friend. They are all on their own which sadly means she is very poor as she could not afford to bring more family and friends with her.

Nearby a much larger group of women surround a loudly crying woman who is clearly and understandably distraught. Her friends gather round hugging her tightly and shouting their support over her cries of grief. Many of them are crying too

The size of the mourning group indicates that there is some money, but the noise they are making is apparently a very bad sign. The more noise they make, the more working class they are.

I think that maybe a truism throughout life!

The upper class, always knowing how to behave, are stoically silent in their grief. They sit quietly with their friends and a priest. Their feelings showing only in their downcast faces

There is also a group of young men mourning the loss of a friend who died in a motorcycle accident. They are performing a ritual to support their friend on his next journey, but they do it in silence and with great dignity

There is a third use of these ghats that we did not see in Varanasi. It also is to do with the passing of loved ones. Hindus come here to make offerings to, and pray for, their ancestors. They usually have a priest who knows them and their family and so they always pray with him.

This priest is one of about forty different priests. Most of them are lined up against a wall in marked out numbered stalls.

If you don’t have a family priest, then you can chose any one of these priests. Presumably you walk up and down the row of priests and select one that looks right for you. The fact that they are all lined up in numbered spaces makes it seem a bit like  “rent a priest cheap”.

In order for them to pray for your ancestors you must bring with you an offering and a list of names of your family and your spouse’s family, going back at least three generations on both the mother and the father’s side. That is a lot of names and a lot of prayers which explains why there are so many priests and why the ceremony takes so long. Of course full names of every ancestor is needed so that there is no confusion in heaven. No one wants their offering to go to the wrong Reyansh or Samar

The priest is dressed in white and is bare from the waist up. He sits cross legged and listens to your list. Then he lights a fire, sprinkles on it a few aromatic herbs and spices, and prays. Some priests seem to be almost trance like as they pray and it is obvious that they are connecting with the ancestors

Others seem to need a little help

“Who are you gonna call – Ghostbusters?”

6 Responses to Death becomes you