My kind of religion

Now, boys and girls, do you remember my Hindu for dummies blog where I explained that Ganeshe, the one with an elephant’s head was the son of Lord Shiva and Goddess Parvati. What I didn’t tell you (mainly because I didn’t know at that time) was that they had another son called Lord Murugan. Now there’s a name straight out of the Lord of the Rings. And just like the Lords in that trilogy, Lord Murugan was a bit of  warrior. There is a temple dedicated to him in Palani. Every year they hold the festival of Thaipoosam there which celebrates his victory of good over evil. No small feat and definitely worth a celebration. At the festival, the devotees ask Lord Murugan to purify them despite all their previous transgressions. There is definitely a theme here, and it seems the Hindus have a never ending supply of transgressions that need to be forgiven. Unfortunately for these devotees, purification is not yours for the asking, you have to go to hell and back for it.

In the west if you are a devotee of the Christian religion, you get baptised. This usually involves  a little sprinkling of water on the forehead or at very worst a quick submersion in a river or lake.

In India if you are a devotee of Hinduism it usually involves a pilgrimage but it can be so much more than that as we are about to discover.

Prior to the pilgrimage the other 7 million have to go through a pre-purification period. I am most grateful that I don’t need purifying as it takes six weeks and during that time you are not allowed to shave, which I presume only applies to the men. That I could handle. But it also involves having only one meal a day, (so a cruise would be out of the question) no drinking (for 6 weeks!) and no sex (ditto!)  And for the entire time you must be continuously thinking of God. I would find that very hard – I am sure I would spend my  time thinking of nothing but food, alcohol, sex and a cleanly shaven woman (well perhaps not the last). It must seem like a very long 6 weeks indeed. It also explains the incredibly low birth rate in the month of November.

You would think a little celebratory day, night, or at the very least an evening, would be in order after getting through 6 weeks like that. But no, their only reward is that they have to start the three day walk immediately, and if that isn’t bad enough, they must do it barefoot. Give me a quick christening any time.

I am sure I should feel guilty for driving (actually even worse than that, I am being driven!) and I try hard to produce a feeling like that, but I just can’t. But I do wave nicely to the pilgrims as we pass by and many of them wave back. At least I think it is a wave.

These are Indian roads with Indian drivers and no sidewalks. Every year there are hundreds of accidents which has forced the government to build a special footpath for the walkers, but sadly it doesn’t go the entire length of the pilgrimage. Walking barefoot also has its problems.  We see many people literally hobbling along the road with crippled feet while others have huge bandages on their feet. But their devotion keeps them going.

Just as onerous is the rule that they can carry nothing with them, not even food and water. Consequently the villages along the way set up massive feeding stations where the pilgrims can stop and eat.

The villages do not charge for this, nor for the sleeping shelters they provide.

Sadly the Indian culture is yet to embrace any understanding of the need to use trash cans, and the villages are repaid for the kindness by the roadside being used as a rubbish tip. 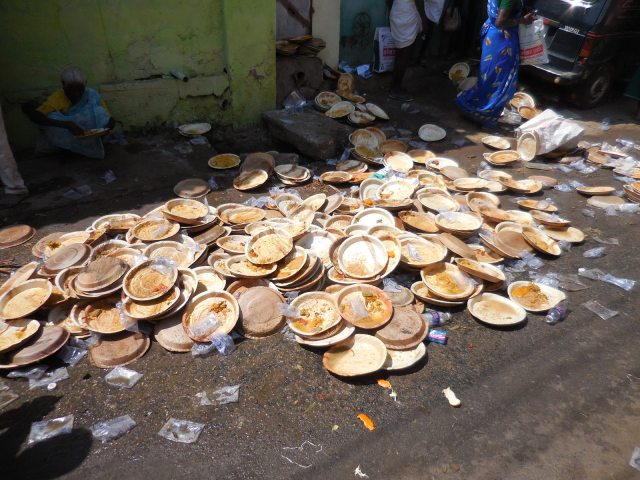 The entire route is disgusting. We drive through miles and miles of discarded plates, water bottles, food wrappers, candy wrappers and other items that I don’t look at too closely

The pilgrimage ends at the Murugan temple which is situated on top of a small steep cone shaped mountain with over 800 steps up to the temple. After 6 weeks of fasting and a three day walk with no shoes, the devotees now have to climb those 800 steps. We are shamed by these determined barefoot pilgrims struggling to complete their journey despite the weary legs and blistered feet. We should at least join them and climb the 800 steps. Our intentions are good, they really are, but there is a huge queue waiting  to go up to the temple and their entrance is being regulated to avoid overcrowding. They wait patiently in a long and winding line that barely seems to move.

I figure their need is greater than mine, and with great reluctance I give up my space in the queue and all thoughts of climbing the steps, however fleeting those thoughts might have been. Then I spot an alternative way up

Perfect!  We can join the pilgrims at the top and they need never know that we didn’t climb the steps.  However this way up is even busier than the steps. The queue for this funicular is just as long and moves more slowly than the other, as the funny little train can only hold a few people at one time.  I reason with myself that  this train is just for old people, or those that are too lazy to climb the steps, and as I am neither I shouldn’t take a seat away from someone who is!

So it seems we are not going to get to the top. But fortunately there is way more fun to be had by just walking around the base of this little mountain. A small road circles the mountain and I would guess it is about a mile long. The entire way is absolutely jammed with people,

most of them still walking, some limping badly but all of them are having a great time. It feels like one huge party. The noise is tremendous, but the few who are just too exhausted to continue, don’t hear a thing

Stalls selling food, trinkets and junk line the way, along with the occasional sideshow

There is a parrot that tells your fortune. You pay it’s owner a small sum of money and the parrot comes out of its cage, hops over to a large deck of cards, pulls a few out with its beak and throws them aside. Then when he has chosen the right card  he walks it over to the owner who then tells your fortune based on the card the parrot picked.

Gordon wants a go and wants me to take his photograph. I get sidetracked taking photographs of the parrot and before you know it the entire process is over without a photo of Gordon. He is not happy, which is an understatement. But fortunately his fortune involves a long, happy, and healthy life so he perks up at that. It doesn’t involve the early demise of his spouse, so I am happy too. I am just a little skeptical about Gordon’s fortune and wonder whether anyone gets a bad fortune, because bad fortunes would be so bad for business.

During the entire day we are there we only see two other non Indian people. The atmosphere, the music, the colors, the crowds and the friendliness of the people, all are amazing. This is definitely my kind of religion. The Fabulosity Meter is ringing loudly. And if it sounds as if that might be the entire story, I can assure you it is not……………….

3 Responses to My kind of religion