Lord Byron fled England for Italy in 1816.  Lord Byron was not what the English refer to as a perfect gentleman. He left behind him huge debts, a broken marriage and scandalous affairs some of which were rumoured to be with men.

William John Banks (WJB) met Byron at Trinity College Cambridge and they became great friends. Whether his family had an inkling as to the sexual orientation of their son is not known, but this friendship must have been the first red flag.

Or perhaps it was his appearance

We are touring Kingston Lacy, the Banks family home. The National Trust has to tread carefully when discussing WJB’s history. The first clue we receive is in the introductory preamble which describes WJB as “somewhat mischievous and rather boisterous”, which could mean anything. But the National Trust owes its customers, especially those with an inquiring mind like mine, the truth. So as we enter the house there is a discreet sign which lays it all out as briefly and succinctly as possible 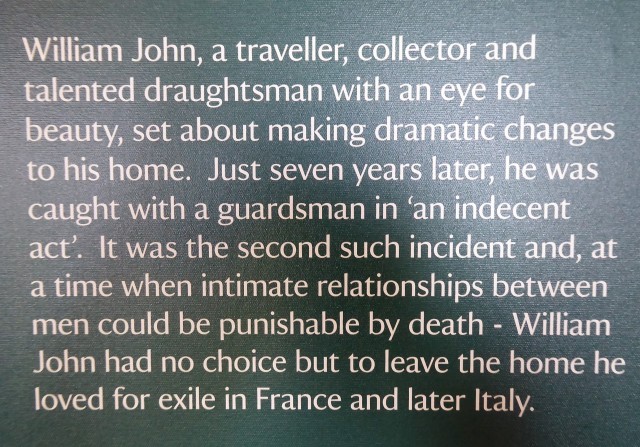 I particularly like the phrase “with an eye for beauty”. Of course beauty is in the eye of the beholder. So it would seem all the suspect young men of the early 19th century were sent to Italy . It must have been quite the place to be!

The exile was particularly hard on WJB as he dearly loved his home. He took with him drawings of each room and for the rest of his life he traveled the world buying beautiful objects and in some cases entire ceilings to ship back to his home.

Kingston Lacy is a beautifully proportioned handsome home but I don’t think I am being unfair when I say it is not particularly stunning, at least not from the outside.

But it is amazing what a gay man “with an eye for beauty” can do to the inside. If you happened to miss the discreet reference to WJB’s sexual orientation as you entered, once you saw the rooms there would be little doubt in your mind. I may use the word “fabulous” a little too much, but it is the only suitable description of how the interior looks once WJB added his touch

It’s amazing what a little gold ormolu here, a few paintings there and a quiet little chandelier from the ceiling can do.

And then of course there is the staircase. Every gay man loves a good staircase. How else can you make an grand entrance? 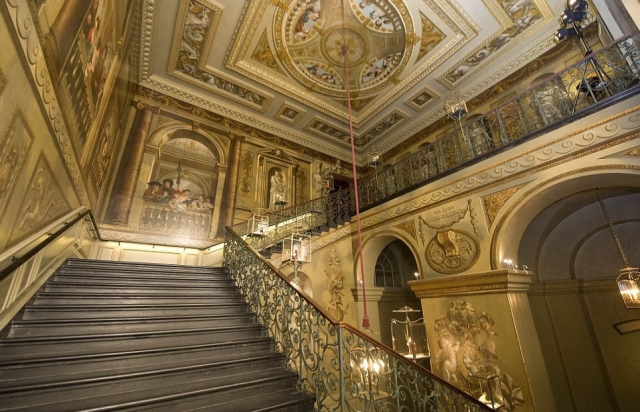 But WJB’s real talent was for shipping entire ceilings from Italy, and sending them to the house where his brother had to supervise the installation. Somehow, some 200 years ago, they made it work. The result may be a little over the top, but the Fabulosity Meter is loving it 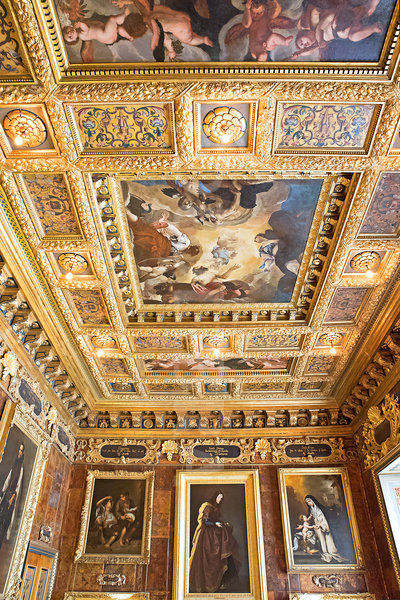 Even the nursery is fabulous, the entire room is painted to look like a giant tent

WJB, sadly was never able to return to England and see what he had created. He died in 1856, rather suitably in Venice.

Oscar Wilde was just a year old when WJB died. But he too was exiled to France, but not before he spent some time in the very same house in Lyme Regis in Dorset, where we are now staying. I hope you noticed that rather clever tie in.

We hopped off the ship a day early, when it was in Portland , and headed for Lyme Regis

Unable to resist sleeping in the same house as Oscar Wilde, even if we were 140 years too late to actually meet him, I have booked three nights in this Bed and Breakfast. Not only that, but I have splurged on the Oscar Wilde Suite, assuming that this was where he had stayed. Sadly I have been misled, perhaps not consciously, by the new owners of the house, a charming young man and his husband.

Are you beginning to notice a theme to this blog. It certainly wasn’t intentional, but it seems homosexuality is and always has been, rampant in England!

So, much to my regret I am not to sleep in the same room as Oscar Wilde, but I have taken a photograph of where he slept. The room I notice is much smaller and less expensive than the one they call “The Oscar Wilde Suite”

Not surprisingly, the two new owners are happy to make the most of the connection to Oscar Wilde in their brochures but somehow fail to mention that the house is haunted.  Not by Oscar Wilde, which really would have been a selling point, but by several other ghosts. The front of the house dates back to the 17th century, while the back half is a mere 200 years old. It is fairly easy to tell where the two parts join because the builders of the newer half didn’t get the join quite right and there is a small slope of several inches between the two, which Gordon manages to trip on each time he crosses it. The ghosts however have no such problem and are happy to haunt both halves.

The previous owners also ran the house as a BandB but didn’t inform the young men of the hauntings until after the sale. Apparently every time one particular room was rented they would find a single shoe left in the room. They would write to their guests to tell them they had found a shoe, but the guests always claimed it wasn’t theirs.

The young men claim this hasn’t happened to them, but I do notice they wear mismatched shoes all the time.

Another ghost is known to be headless. Rumour has it that a third ghost stands in the cemetery across the road (another thing not mentioned in the brochure) and points at the house and says “beware of the headless horseman”. It seems impossible to imagine that these two gentlemen could live with a headless ghost, but it is hard not to notice that we are the only guests in a very comfortable seven bedroom guest house just a few steps away from the beach.

It is not beach weather, although Brits on holiday think any day without rain is a beach day. Gordon however has other plans. He is trying to cram as much culture into my uncultured brain as he can. He has been trying to do this for decades and has been met with spectacular failure, but he still perseveres. He has a list of stately homes we have to see and we are averaging two a day so far. If the drive between them wasn’t so long we would be doing more. He listens carefully to everything that is said by the docents, reads everything that is written and takes it all in, while I wander aimlessly hoping a small piece of knowledge will stick and Gordon will feel he has accomplished something.

(Deafening silence from the Ed)

One thought does cross my mind. Quentin Crisp once famously said that he was one of the Old Stately Homos of England.

It would appear he was in very good company.