Malta’s position in the Mediterranean makes it of great strategic importance. It is an asset in peace time but has brought terror and hardship to this small island in war time. We see the first sign of this as we sail into Valletta. It’s a breathtaking sight, but the narrow entrance to this natural harbor is guarded on both sides by huge medieval forts

The harbour is shaped a little like a hand. The thin wrist being the point of entry from the
Mediterranean. Once through the entrance, the natural harbour opens up like the palm of the hand and then divides into inlets or fingers. Between each inlet is a promontory of land which rises up several hundred feet,and is covered with narrow streets and tall buildings. Everything, including the forts, is built with either sandstone or limestone, and comes in varying shades of pale yellow all glistening in the sun.

Nothing has been allowed to intrude on the look and you can easily imagine that this is how it looked a couple of hundred years ago. The only colors, other than the pale yellow stone, are the brightly painted windows and shutters. 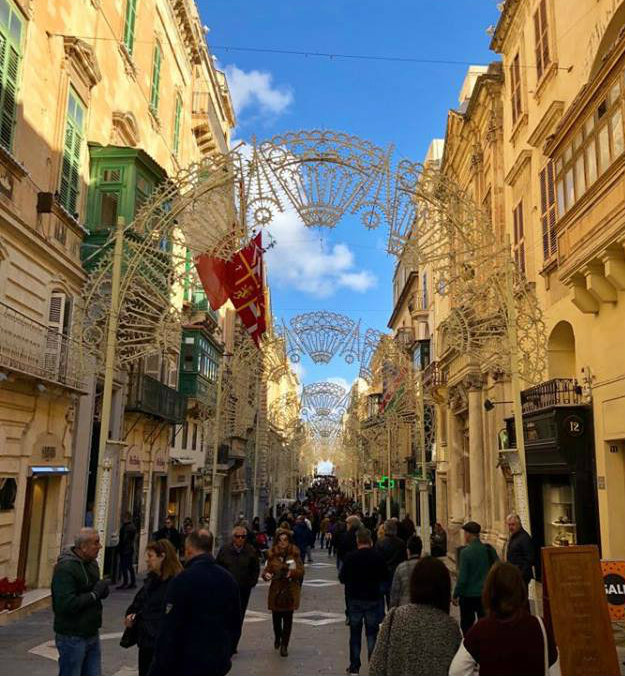 It is eight years since we last came to Malta and the Fabulosity Meter is happy to be back.

The island owes its look to the Knights of St John, noblemen from the most important aristocratic families of Europe. In the 16th Century they had a mission to protect the Catholic faith and Europe from the attacks of the Ottoman Turks. It was quite a mission for just 700 Knights. Pushed back from other lands they made their final stand in Malta where somehow these 700 Knights together with a few thousand Maltese soldiers survived a three month siege and managed to repel an invasion of 48,000 .

The Catholic Church rescued from the brink of annihilation was euphoric. They thanked God with their prayers and thanked the Knights in a more secular way. They bestowed huge amounts of money on them, a show of gratitude that is always appreciated.

In return the Knights wanted to protect the island from further invasions. So with the support of the church and the good people of Malta, and with their new untold wealth, the Knights set about turning the island into a fortress and building a capital city worthy of their noble selves. Hardly a modest goal, but they were up to the task. The crowning glory was the Co-Cathedral of St John set high on the largest promontory of Valletta. From the outside it is a plain and modest cathedral with two bell towers standing guard over it, giving it the look of a fortress

Originally so was the interior. The new incoming Grand Master of the Knights thought the original interior of his predecessor was too plain. Baroque was becoming quite the look at the beginning of the 17th century and its flamboyant style seemed the perfect way to make the interior considerably more festive than the exterior. It certainly has. In a display of unprecedented splendor the cathedral has made the  description “ornate” seem perfectly inadequate. 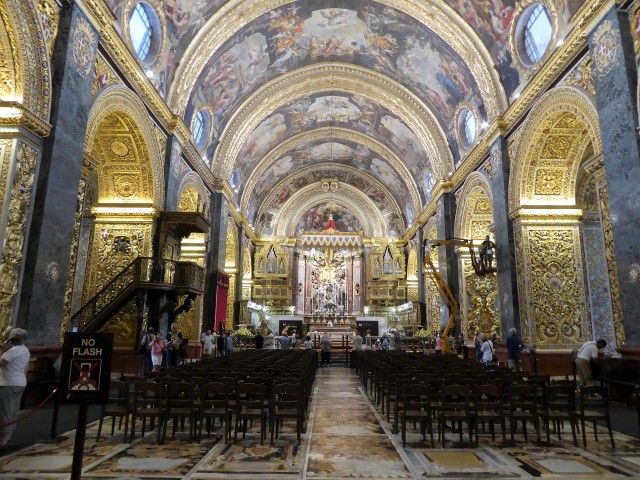 There is gold everywhere. The walls are covered in gold 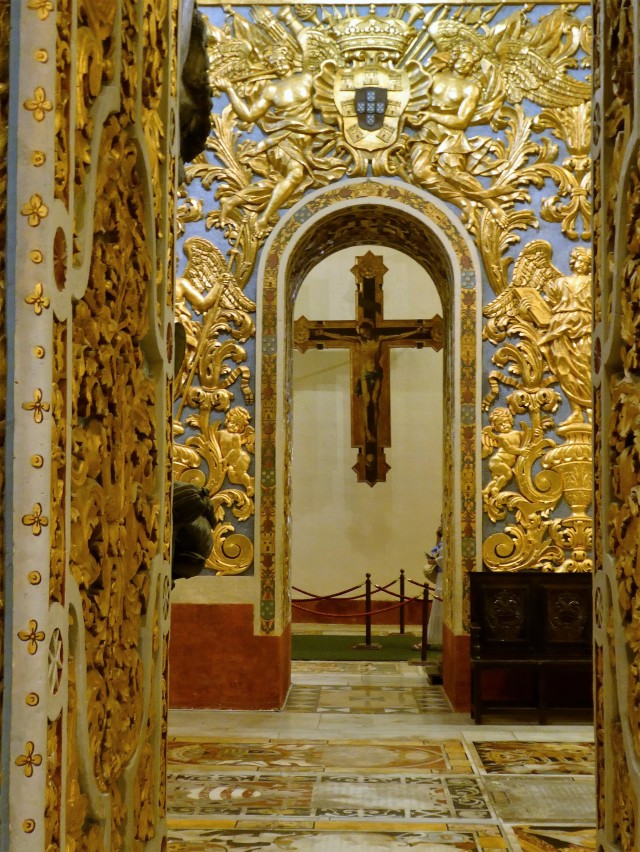 The arches are covered in gold

The ceilings are covered in paintings

The floors too are breathtaking – made up of marble tombs under which lie Knights from the Order. On each tombstone there is the coat of arms and name of the Knight.

When the Co-Cathedral was built, the Knights hadn’t imagined this highly decorated interior. Instead the Grand Masters donated many notable paintings to decorate the cathedral. Mattia Preti is the artist who designed the interior and it is obvious that showing restraint was not one of his strengths. He saw no reason why the paintings shouldn’t be re hung right along with his ornate baroque designs; gold and more gold, marble and more marble, paintings and more paintings. You just can’t have too much of a good thing. So now the cathedral looks like Liberace’s Art Museum.

The most important painting is by Caravaggio. It depicts The Beheading of Saint John the Baptist,

I accept that the Church works in mysterious ways, mysterious to me at least. But I find it hard to accept that they commissioned a painting by Carravaggio. He was a nasty piece of work with a violent and uncontrollable temper which finally resulted in him killing a man. He was continually moving cities and countries to keep a step ahead of the police, and yet the Church saw fit to hang a painting of his in St John’s. The church has always been good at turning a blind eye, and I guess art conquers  all.

I have to admit that I am ambivalent about the interior of St John’s. I can be as flamboyant as the next gay man, but this may be just too over the top even for me. I like a little Baroque, but Baroque doesn’t do little. There is also this odd quirk I have about displays of stupendous wealth inside a church, when surely the money could be put to better use. But despite my misgivings there is only one word that truly describes St Johns and that of course is Fabulous! The Fabulosity Meter hasn’t made so much noise in years.

We spend a long time enjoying St John’s but we are only here for the day and there is much else to see.

Next on our list is Mdina, Malta’s first capital. Rising out of a stone plateau high above the rest of the island, and surrounded by a huge stone wall it looks like a fortress and is another city designed to repel all comers, except of course the tourists.

Inside the walls, the streets are narrow and winding

They are lined with imposing aristocratic houses, huge churches and monasteries. Again, nothing has been allowed to alter the original look and feel of the town. 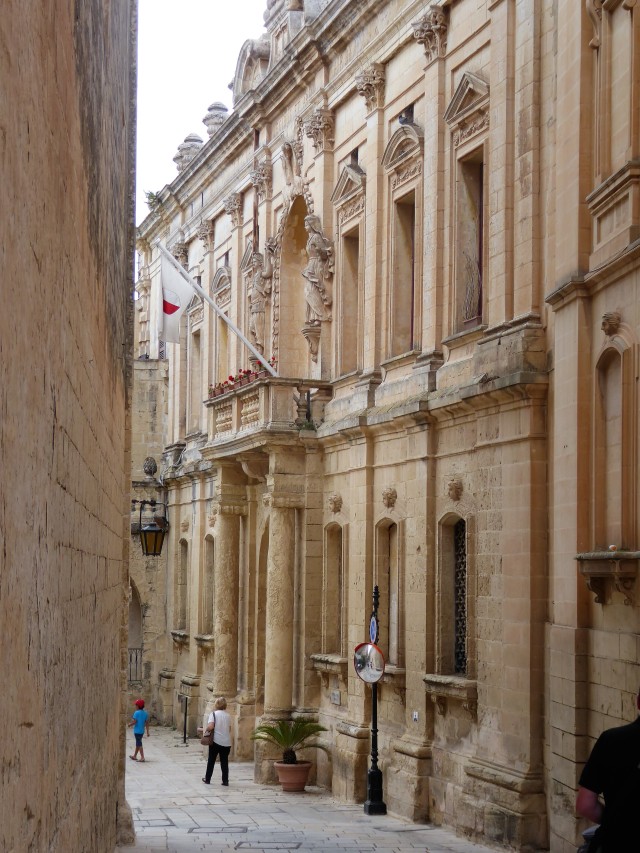 When I wrote about this city eight years ago, I wrote that there were very few shops allowed and those that were allowed were small with no visible signage, and that even more remarkable was how quiet the place was with hardly a tourist to be seen. Eight years later there are still very few shops, but now the place is packed with tourists milling around aimlessly, unsure of how to enjoy the town when the pleasure of buying cheap trinkets and T shirts is taken away from them.

From there we drive to Marsaxlokk, a fishing village known for its difficult pronunciation, impossible spelling and absolutely charming harbor full of the colorful luzzu fishing boats that the island is famous for.

It’s not just the fishing boats that get the treatment. Anything that floats, however small is painted in bright colors

The harbor is a riot of color and it is infectious. It brings a smile to everyone’s face. Even the normally sedate Asian tourists throw on colorful outfits and get into the spirit of the place, 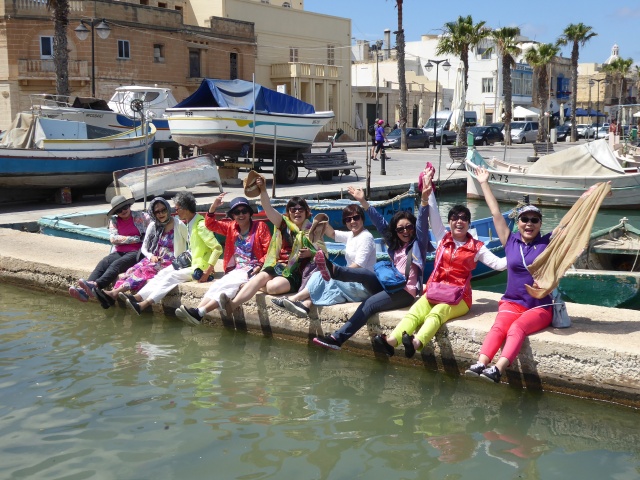 The harbor is lined with wonderfully inexpensive restaurants that serve huge platters piled high with assorted fish, shell fish, prawns, mussels and more, all for less than $30 for 2 people. My idea of heaven.

We have time for one more quick visit. It is another church. The Mosta Dome is the fourth largest unsupported dome in the world, which might have made it worth a visit in its own right. But unlike St John’s the interior casts no spell, and holds no magic. To be quite frank it is a little uninspiring

But it has a story that inspires, and brings us back to the perils Malta has faced as a strategic island. In World War 2, Malta was the most heavily bombed place per capita in Europe. A service was being held underneath the Mosta Dome when the air raid sirens sounded. Some of the congregation fled the church for a safer place. Others believing that nothing would happen to them while in God’s house, remained. A 400 lb bomb made a direct hit and smashed through the dome and hit the church floor.

A second bomb hit just outside the church.

Unbelievably neither of them exploded.

The church does indeed work in mysterious ways.

7 Responses to Malta: Going for Baroque