A fate worse than death in Palermo, Sicily

Our appointment to meet the friar is at 10am. I have never met a friar before and am interested and intrigued, especially as there is the promise of meeting others.

I do not want to be late. I have driven in Italy many times without any problem. But here in Palermo, anarchy rules the roads just as it does the country.  No one obeys any rules. Cars are double parked and even triple parked making progress extremely slow. I believe they drive on the right hand side of the road, but it is impossible to tell. Two lane roads somehow have a middle lane. One way streets are not. Halt signs and traffic lights merely offer suggestions that can be ignored at will. It is chaos and if I was driving a nice car I would be terrified. But I am not. Europcar has rented us something called a Fiat Panda at an exorbitant price. It is tiny and appears to be made of tin. It’s engine has been borrowed from a lawn mower. Going up a hill necessitates one of us getting out. It has 4 seats but sitting in the back would be impossible unless your legs ended at your thighs. I am not prone to coarse language (well not in the blog anyway) but I can only describe it as a cheap piece of shit.

We are meeting the friar at the Capuchin Monastery. It is in an old part of town and after a mile or two of fairly main roads, we find ourselves in a maze of narrow winding back streets, lined with dirty dilapidated houses and overflowing trash cans. The area is unwelcoming if not unsafe. Our Fiat Panda feels luxurious compared to the parked and abandoned cars we pass.

Finally the GPS announces that we have reached our destination. The Monastery sits on a corner where several roads meet. There are a few cars parked in the middle of the road and a man of undetermined age dressed in clothes so old and worn that it is impossible to say what color they are, is directing us to park alongside them. We try to ignore him, but he makes it hard by standing in front of the car. We park and he comes to the door bringing with him a very unpleasant odor and just a few teeth.  He demands a parking fee of 2 euros, and assures us he will look after the car while we are gone. The way he explains that leaves us in no doubt as to what might happen to the car if we don’t pay the 2 euros. We doubt that anyone would want a Fiat Panda, but we pay the two euros. He immediately crosses the road to his friend. They high five each other and start planning on how they are going to spend their new found riches. I suspect alcohol is involved.

We are late. But the friar is waiting for us. Somehow I knew that he would be. He has been waiting so long that he is nothing but skin and bones. He is wearing the brown robe of the Capuchin order, and a shocked expression. Not shocked that we are late, but shocked at what has happened to him. He has been dead for over 400 years and yet we are meeting him in the flesh, or what remains of it. He is here, in the Catacombs of the Capuchin Monastery with some 8,000 other corpses, all equally well preserved, but we only get to meet about 1,800 of them. That is plenty, believe me. They are pinned to the walls double decker style, or sitting on benches or lying in open coffins, each one dressed in their Sunday best ready for visitors. 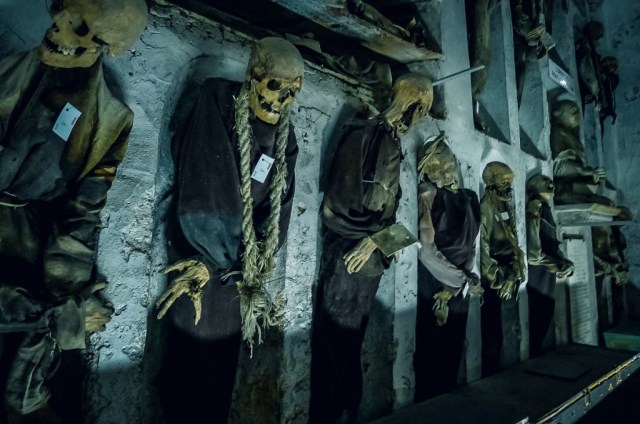 A name tag is pinned to the robe of each one, just in case I need to introduce him to someone.

A railing is the only thing that separates the living from the dead.

The first monk was interred here in 1599, and as the first he gets priority seating, greeting all visitors as they enter the catacombs.

One monk, somewhat more concerned about his surroundings than others, even holds a sign asking visitors not to smoke 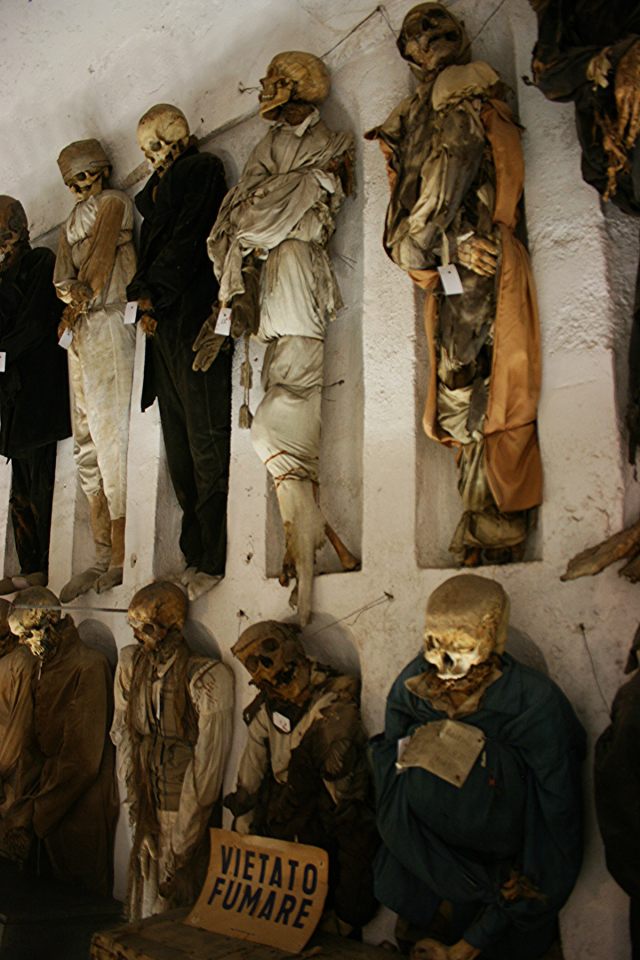 For many years monks were the only ones interred in the Cactacombs. But eventually word got out and the locals wanted in. It sounds like a fate worse than death to me, but to the good citizens of Palermo it sounded like life after death.  If the monks could be preserved for eternity why couldn’t they?  Everyone, it seemed, wanted to hang around after death for as long as they could so that their relatives could continue to visit and pay their respects. The monks, always ready to make a buck, didn’t need to be asked twice. They made extra amounts of embalming fluid and opened the doors of the catacombs to everyone. Well not everyone exactly. Just those that could afford it. There was a considerable buy in fee plus a yearly home owners fee. It kept the riff raff out and brought the money rolling in.

This continued right up to the early 20th century.  Each new body was carefully preserved and given a permanent home, where he or she could remain for just as long as the living relatives paid the yearly “home owners fee”. The  moment the money stopped coming in, the body was out, or at least set aside on a shelf, until payments were resumed. There were no flies on those monks, dead or alive.

There is also one small area that has nothing but skulls 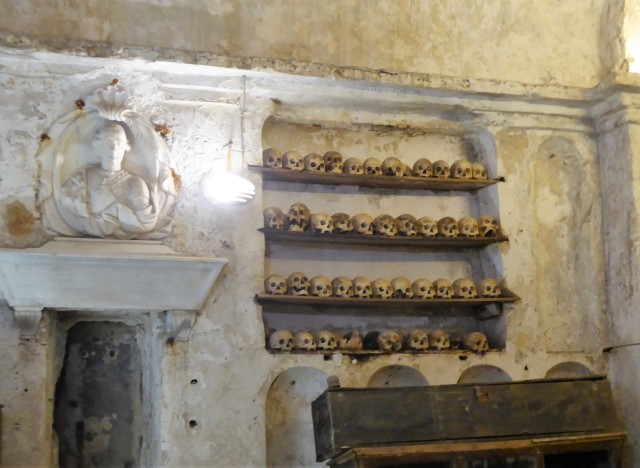 I could find no information as to why this is, but perhaps something went terribly wrong with the preservation of the body and feeling obliged to have something to show the relatives, they popped the skull into this cupboard.

Skulls with skin slowly peeling off them, bodies hanging scarily intact from a nail in the wall, some striking poses that even Madonna (the singer, not the Virgin!) would be proud of, hollowed out faces with grotesque expressions, some with teeth, and at least one with a moustache. It takes macabre to a whole new level.

As you know, dear readers, my curiosity has taken me to many unsavory places, but they have all been filled with the living. Somehow the dead are far more disturbing. There is a feeling of dread that haunts me here. The longer I stay in this place the worse it gets. I want out.

I am rather hoping that my interest in all things macabre has now been cured.

Like Loading...
This entry was posted in Italy and tagged Catacomb at the Capuchin Monastery, Palermo, Sicily. Bookmark the permalink.

1 Response to A fate worse than death in Palermo, Sicily