The Norwegians are an appealing bunch. Both the women and the men are tall, blond, athletic and handsome. It is sometimes hard to tell them apart but the women are the ones with pigtails. They have all the attributes of the Aryan race but without the foreboding  menace.

Unfortunately there are only 5,ooo,ooo of them in a country that is 125,000 square miles. That’s just 40 of them for every square mile. But if you look hard you should be able to  spot a few. Look, there is a couple of them up there………… 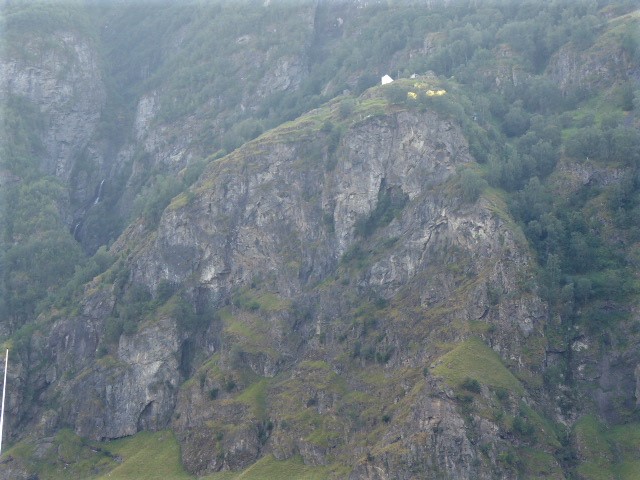 We are in Flam today where less than 500 of them live. The Norwegians pronounce it Flom, because the “a” has a tiny “o” over the top of it making it the last letter of their  alphabet and turning the “a” into an “o”. You would think it would be simpler to just spell it with an “o” but I guess with those good looks comes a little brain.

So that, you will be relieved to hear, is the extent of my knowledge of the Norwegian language.

Flam is a spectacular little harbor, strangely positioned well over 100 miles from the open sea.

To reach it, we travel up the stunning Sognefjord 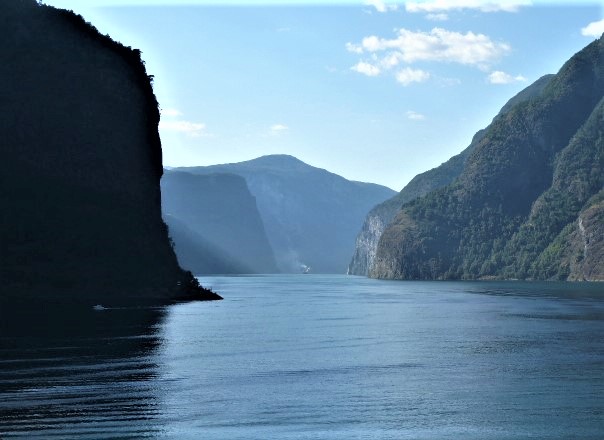 On the way we pass a picturesque little village taking advantage of a tiny bit of flat land at a river mouth and allowing that square miles allotment of 40 Norwegians to find a home. 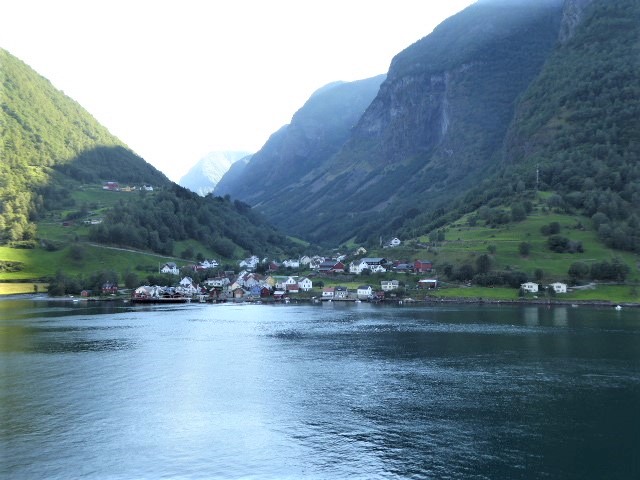 It doesn’t take long to explore the delights of Flam, so we take a trip on the Flam railway up into the mountains to Vatna-Hansen the stop before the end of the line at Myrdal, where you can connect to the Oslo train.

To digress for a moment, I mentioned the age of the average passenger on board ship was rather high. If you want some additional evidence of that, the ship put out a little advisory notice telling us about the railway but warning us it was a 20 minute walk from the ship to the station. This is the view from my balcony looking out to the railway station. 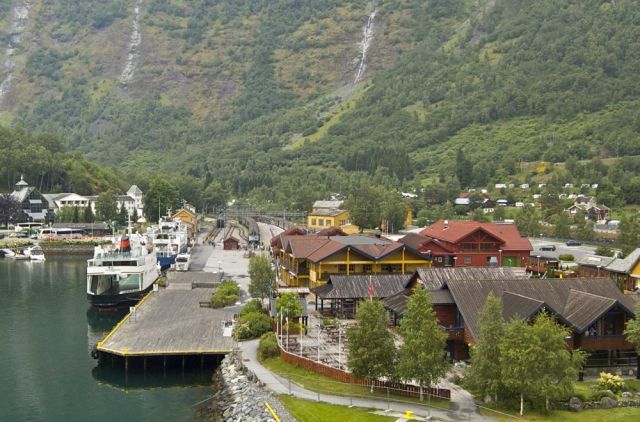 It really was that close. And yet I heard one passenger ask if the concierge could arrange a taxi for them.

The Flam railway is recognised as one of the most beautiful railway journeys in the world, as it winds its way up through spectacular scenery 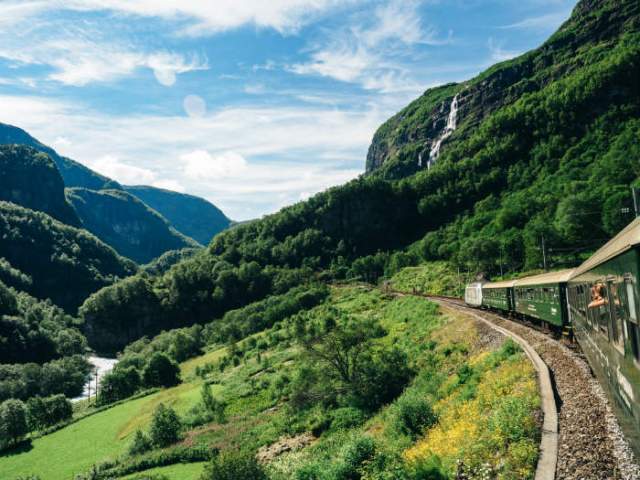 The train makes a five minute stop right over one of the more dramatic ones. We all rush out to take photos

As we step out, mystical music fills the air and a dancer dressed in red flowing robes moves gracefully over the rocks while the spray from the waterfall washes down on her.

If you look very carefully in the above photo you can spot her. It is a delightful performance for the tourists,

The damp clearly does nothing for her hair do, if in fact it is a her. After a few minutes the music stops, she leaps dramatically from the rock supposedly into the waterfall and we all climb back on board the train, just a little bit more in love with the country and its people

It takes an hour for the train to make the 12 mile journey, but in that time we have climbed almost 3000 feet making it the steepest climbing railway in the world.

It is an impressive and beautiful trip, even more so when we reach Vatna-Hansen and look back down to where we have come from. I have to say that the Fabulosity Meter is impressed 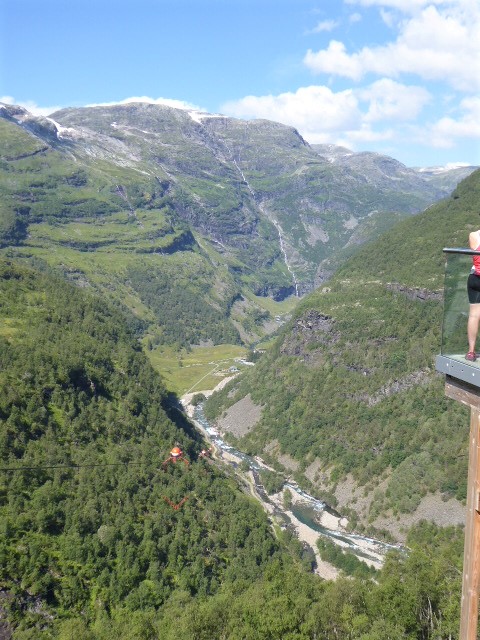 We have made the climb in the comfort of a railway coach. The Norwegians prefer to cycle up.

As I said, cute but dumb.

When they reach the spot in the photograph above, there is a small cafe, an emergency medical care office and a zip line. First stop is usually the medical office. Having been resuscitated they grab a quick cup of coffee before going for the next heart stopping thrill. They return to the valley floor by zip line!

If you look carefully you can see the line crossing the trees in the photo above, the orange dots marking its dramatic descent. Their bicycles are sent down on the zip line first, and then they follow.

And for this they hand over about $90 per person.

Now I would happily pay $90 to be zipped UP to the top of the mountain and then cycle down. But to do it their way just proves my point. Cute but really dumb. 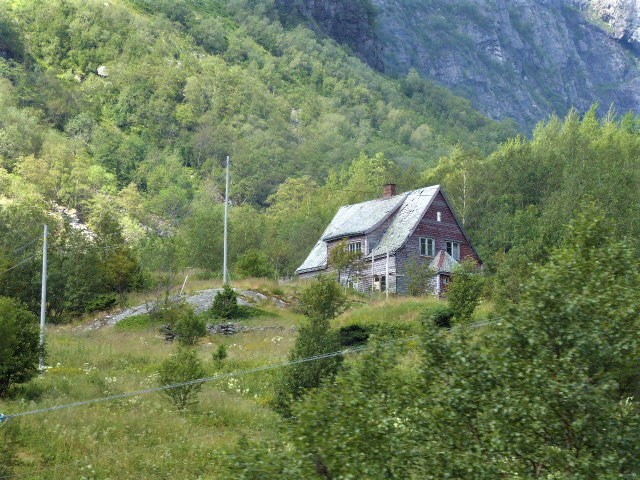 but in the winter a little less so. Completely cut off from any town, the only way in and out is by the train and then by skis or snowmobiles. I can’t think of anything worse, but to the Norwegians it is the perfect getaway and the little train that could, still makes the journey 4 times a day through the winter months

We return to Flam which is enjoying a heatwave. This means the temperature is in the high 70’s (28 C) and I have to say it is perfect. A beautiful sunny day in a spectacular spot. The locals don’t see these sort of temperatures very often and they are making the most of it. They rush to the little pebble beach and jump into the waters of the fjord. Those that planned ahead brought their swimsuits, those that didn’t jump in completely naked.

It is easy to pick out the Norwegians – they are the blond gods and goddesses with well defined bodies who dive in and swim way out into the fjord. The foreign tourists are the flabby bodies that paddle in up to their waists and shiver for a few moments before retreating to dry land.  I love to swim and grew up in England. I can deal with cold water. But I do not look as good as the Norwegians so I return to the ship to get my swimmers.

Back at the beach I am sure I can hang with the locals. I run into the water past the shivering tourists and dive in determined to swim stroke for stroke with the locals. I come back to the surface gasping for breath, my heart almost stopped, my extremities turned to ice.  It is numbingly cold.

Not cute, in fact really dumb and no match for the Norwegians.