Hammerfest – somewhere over the rainbow

Would you choose to live 600 miles north of the Arctic Circle? Well the good people  of Hammerfest do. In return they get almost two months of darkness when the sun never rises. Then they get two months when it never sets which sounds good after all that darkness, but the trouble is the sun doesn’t actually shine that often. A lot of the time it is grey and bitterly cold. It is so cold  that trees can only grow in the most sheltered of spots, leaving what can only be described as a barren and desolate landscape.

And yet 8,000 people call this place home, and it must be said that they have created  a rather appealing town around a natural harbor. It even comes with a rainbow, or two 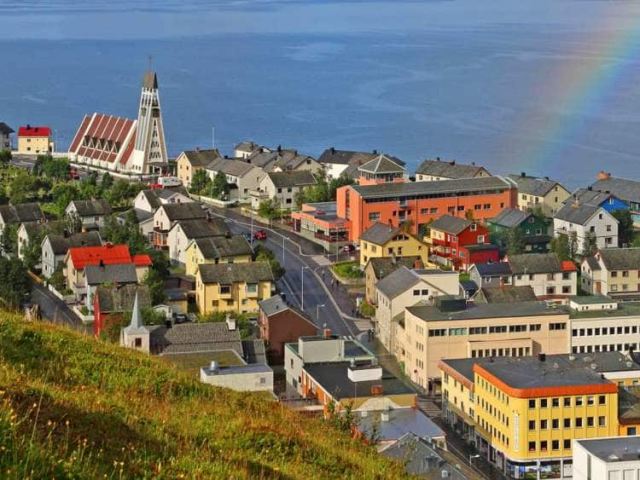 They are proud to call Hammerfest the most northerly town in the world, and if it were true it would certainly be something to be proud of. However it is not – we will be stopping in  Honningsvag later on in the cruise which is a good 60 miles further north, where trees can’t grow anywhere at all.

Hammerfest is also famous for being the first town anywhere in Europe to have electric street lamps. Tired of the endless months of darkness they purchased one of the very first generators built by Thomas Edison in 1891 and gave themselves light in the endless darkness.

So here we are in one of the most inhospitable places to live, hundreds of miles from any town that you might have heard of and what do we find ……………. 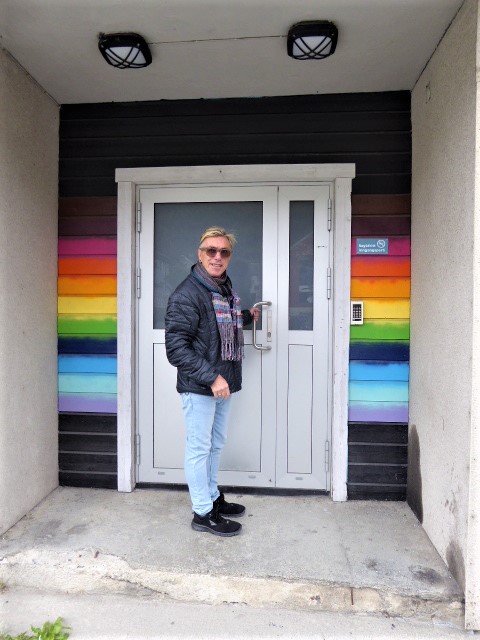 A gay bar and another rainbow ………… in Hammerfest, inside the arctic circle. A rainbow of light in the darkness. Hooray for Norway. Hooray for Hammerfest. Sadly it is 11am in the morning and it is closed

And then, a little later, high up on a barren plateau above the town we suspect we have come across another one. There isn’t a rainbow sign, but there is a young man standing at the door with an outfit and a pose that can only mean one thing, and he appears to be waiting for us. 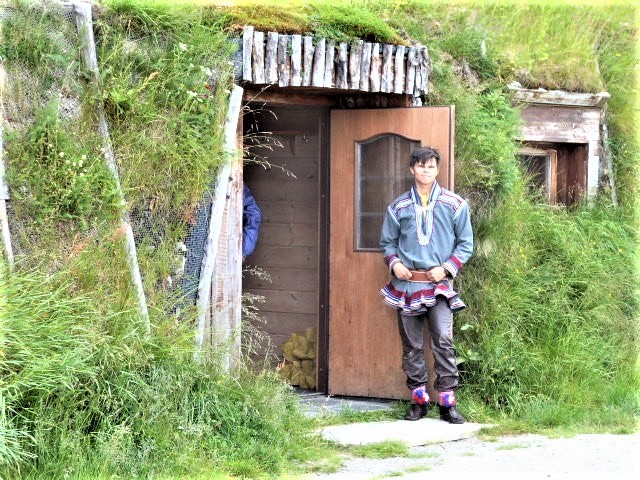 Actually dear readers this second one is not a gay bar. It is a meeting room for the Sami, the indigenous people of Northern Norway.  And the young man is a Sami in traditional dress. Whether the pose is traditional is a question for another blog. We have joined a small group to meet some of the Sami people and hear how they live and have survived for centuries in this truly inhospitable land.

They live by herding reindeer. Without the reindeer they couldn’t exist. They eat the meat, make clothes from their skin, and shoes from the forehead and lower leg of the animal. In the winter months this particular tribe of Sami live in the forests some 300 miles south and east of here. The forest offers some shelter for both the reindeer and the Sami from the extreme cold and the arctic winds. But as the weather gets warmer (a relative term in these parts) and the snow melts, the bugs come alive in the forests and make life extremely uncomfortable. The Sami round up the reindeer and make the journey to the coast where there is grazing for the animals and fish for the Sami. The journey used to be made on foot but now they use snowmobiles.

When they travel they make tents that look very similar to Indian tepees. When they settle in one place they make more permanent homes with wooden frames and earth, grass and plants for insulation 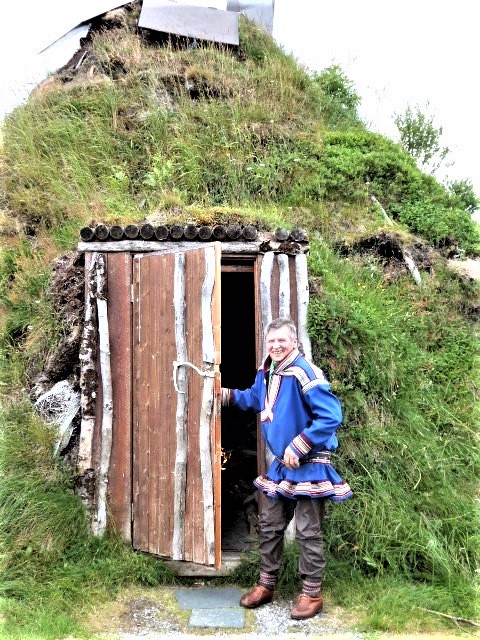 Inside it is warm and cozy and very smokey. A wood fire in the centre of the home burns at all times. An open hole in the roof is supposed to allow the smoke to escape 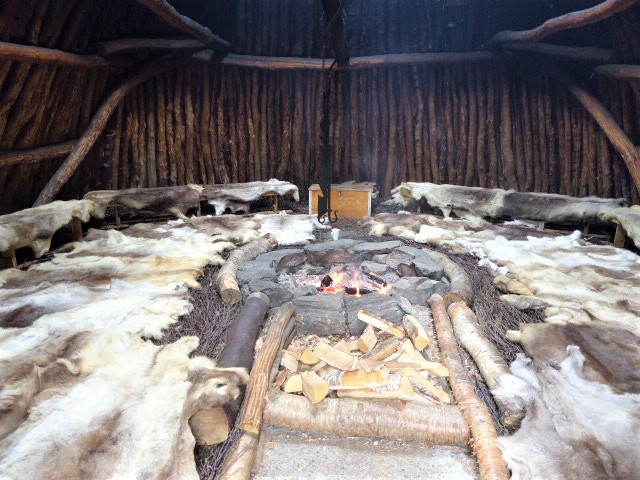 The ground is covered in springy birch twigs which are covered in reindeer skins.

It is quite beautiful and I can see an interior designer creating a fabulous home just like it for a wealthy client desperate for a new look.

For almost an hour Mikel squats on his knees by the fire and in a quiet voice tells us in English, with a heavy accent, the history of his people. 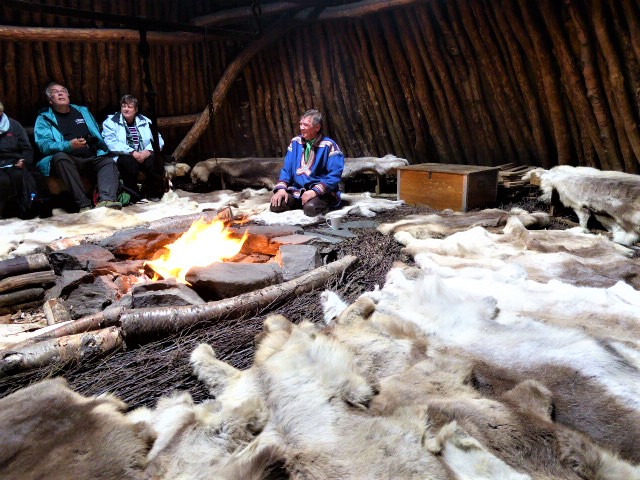 The Sami also have their own distinctive music that is sung without any instruments. It is a strange atonal sound that again is reminiscent of the Indigenous tribes of North America. Much has been made of the similarities and it is believed that at some point the Sami crossed the great waters and found North America.

The Sami songs have been handed down for centuries and tell of their lives. These songs too were banned and it was only in 1980 that they were allowed to sing them again. Mikel sings three for us in a soft haunting voice, his eyes looking past us into a land that only he can see. The last song is one Mikel has written about his son, who is the young man who was standing outside the meeting house waiting to greet us. He tells us that he hopes in the centuries to come others will sing his song and learn about his son. We understand none of the words, but the depth of emotion in his voice moves us to tears.

In the last 20 to 30 years things have got better for the Sami in Norway, but not in Russia. Schools must now offer the Sami language to anyone who wants to learn it. In Russia the Sami language has almost disappeared. Here the Sami have been allowed their own parliament – it is not one that can make any laws but it is one that is listened to by the Norwegian government. But just like everywhere else in the world acceptance takes time. The ignorant have a loud voice and their prejudices will always be heard. Sadly even one of our bus drivers feels free to make such a comment. 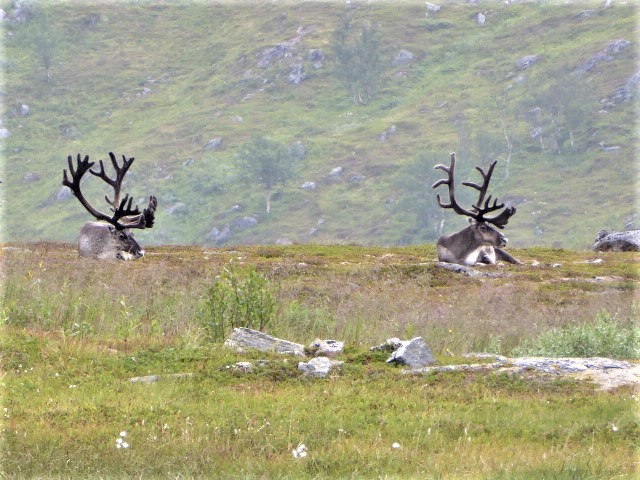 They are impressive animals and the males have magnificent antlers 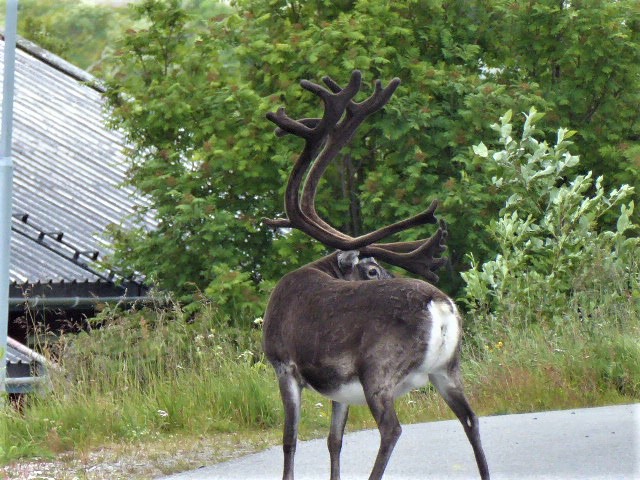 A little later in the year the males become aggressive and do battle with each other, fighting over the females as males so often do. And no matter what anyone tells you, the males with the biggest ones win.

Back in town, we take a walk through the streets. It is a small town with just a few shops. The sky is dark and ominous, the wind is bitterly cold and rain begins to fall. It is the first week in August and it is miserable.

Why do people live here?

Do they really enjoy their lives? 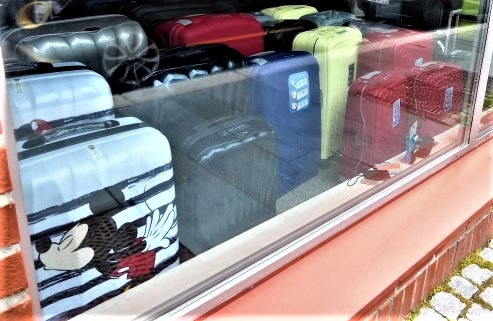