Many of you have been with me on my travels for several years now and I have come to understand what it is you expect of me. I know that once you learned I was in Italy, you rubbed your hands together in glee, and are now sitting expectantly with a cup of coffee, or maybe something stronger, waiting for me to express my opinions on the Italians. Actually what you are waiting for is a rant, full of sweeping generalizations, preferably slightly slanderous, that might shock and/or amuse you .

Well I do have a sweeping generalization to offer, but sadly it is rather complimentary.

The Italians are sort of fabulous. I am holding back my complete admiration with the words “sort of”, but I have to say Italian men are handsome and the women are beautiful. They ooze style and sex appeal which makes people watching an absolute must. They are slim and tall and dress to the nines at all times. Their clothes look expensive, and are. Whenever I am in Italy, I want to look like them. I rush to the shops which are full of beautifully tailored clothes. The label might say it is my size, but the tailoring does not allow for anyone larger than a stick insect to squeeze into them. And if they did the price would give me heart palpitations.

Their sense of style is expressed in everything that they do, and especially with the cars they drive. Those that can afford them, have stylish sports cars made by Maserati, Aston Martin, or at the very least by Mercedes, Audi or Jaguar. Those that can’t afford them, drive original Fiat 500’s from the sixties, preferably the two tone model, which are just as stylish but in a different way. Rich or not so rich, they effortlessly make a statement about how good they look, even when driving a car.

They wouldn’t be seen dead in a new Fiat 500 because they are made in Poland. I, of course, have rented one, and have to wait until no one is looking to get into it.

But despite all this style, or perhaps because of it, I am never quite sure if I like Italians. They seem a little arrogant, a little standoffish. But then if I looked that good I might be arrogant too.

I try to give them the benefit of the doubt, I really do, but it is just impossible to like anyone who eats so much food, drinks so much wine, and still looks fabulous. An Italian eats at least two bowls of pasta a day. The first is at lunch time and is followed by a two hour siesta. The second serves as a sort of palate cleanser at dinner and is served between the appetizer, and the main course. Dinner never starts before 9pm and is rarely finished before midnight. There are four courses and at least two bottles of wine per person.

The meal starts with an appetizer which often consists of a large plate of different salamis, prosciutto and cheese with a bowl of olives as a garnish and a basket of bread. Then comes the pasta swimming in tomatoes and olive oil. The main course usually has something to do with a cow, preferably a very young one. And no true Italian ever goes without dessert, which is invariably a sinfully rich concoction of fried pastry and creamy filling. It is called cannoli which is in fact the plural for cannolo, but it is never called cannolo because no one ever has just one.

After that the average person would either go directly to the bathroom or to their bed. But for Italians the night is young. They rise from the table ready to continue the festivities until the early hours. The women sweep their long dark hair behind their shoulders and straighten their beautifully fitted dresses, making sure they show just the right amount of cleavage and leg. The men check the obligatory three buttons are undone on their crisp white shirt and then that their perfectly tailored trousers are unaffected by the amount of food that has passed both inside and outside the 28′ waist.

And that, dear readers, is why I described them as “sort of” fabulous. It is so easy to admire the Italians, but so hard to like them.

There are many other people in the world who have style of course. But Italians have them beaten because of one simple fact. Every Italian manages to live in Italy. Now that’s classy. Italy is surely one of the most stylish and beautiful countries in the world. The Italians and Italy just seem to fit together perfectly.

I am staying in Lake Maggiore, which I think is beautiful. But then I take a trip to Lake Orta, a much smaller lake to the west. There are two ways to get there. I can drive for a couple of hours over the mountains that separate the two lakes, a slow and windy road that makes its way along a narrow pass through incredible scenery and tiny remote towns with churches built centuries ago, or I can take twenty minutes to drive through a tunnel.

I take the scenic route and as I come down the other side of the mountains, this is my reward:

At lake level it looks even better: 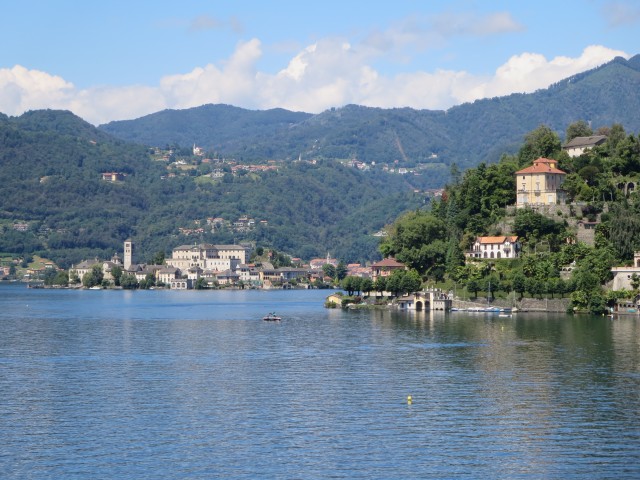 You must admit that the place has style. We would all be so much more stylish if we lived here.

The island in the middle of the lake is called Isola San Giulio and I discover that a small water taxi will take me across there. A foot path goes round the island with beautiful old houses on either side, but all of them are hidden behind tall walls. Finally I come to a church. Churches (or holy buildings of any religion) are not my favourite thing to see as I find the wealth inside them somewhat counter productive to the beliefs that caused them to be built. There is no sign anywhere to suggest that this particular church is any different from the thousands of others that dot the Italian countryside, just a notice board with the name Basilica San Giulio. But I have little to do on the island so I go in. It is clearly an old church but the plain wooden doors give no hint as to what lies behind them. It is an astonishing sight. The walls and ceiling are covered in beautiful murals: 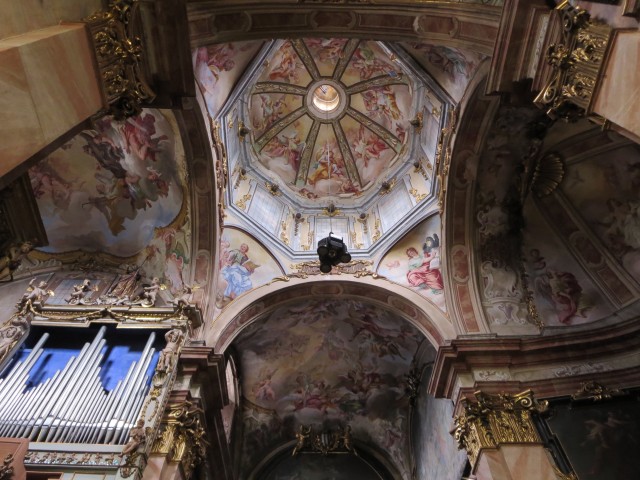 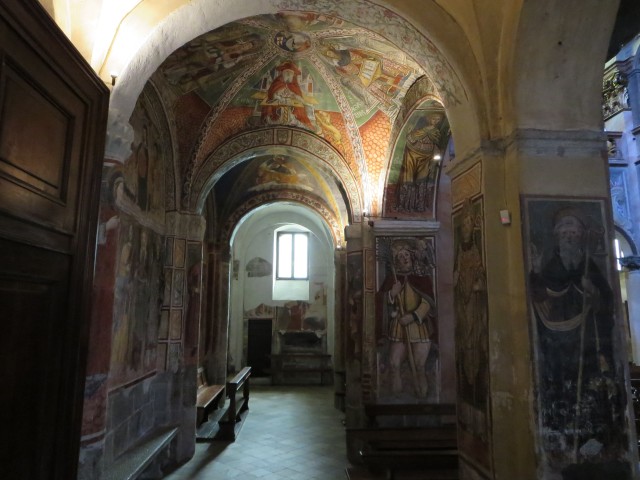 The church was built in the first century but was rebuilt in the tenth century. The murals are from the 17th to 19th century. But the most stunning thing of all is the pulpit which was carved from one piece of black marble and dates back to the 11th century. 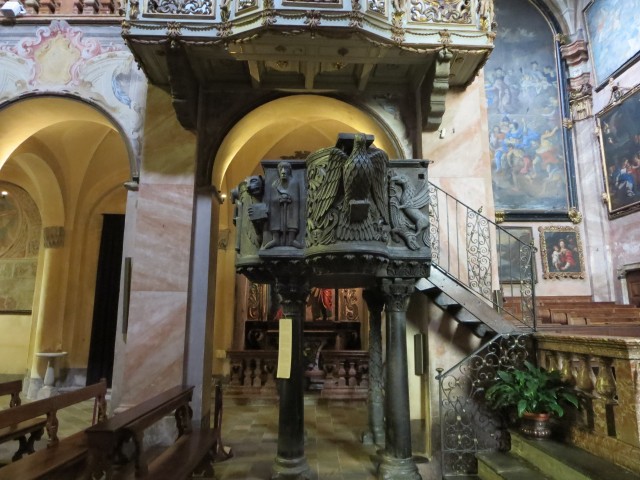 The church is fabulous. But what makes it so Italian is that there is no sign anywhere to tell you that you are looking at anything special.

Now that is style.

Nine days in Italy is truly relaxing, but a return to England is next on the schedule. This time we are spending ten days visiting friends. We are visiting them because we like them and so, wishing to keep them as friends I will end the blog here.

But having written at some length about the Italians and their incredible sense of style, I will finish off by saying that the English too have style. It may differ slightly from the elegant groomed look of the Italians, but it is still a definite look that gets them just as much attention 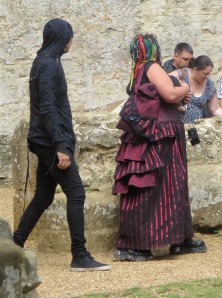 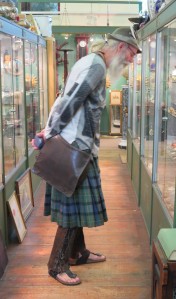