A little of what you fancy does you good in Fiji

The effects of global warming are everywhere. Even Fiji. The temperature today is 33 (91F) degrees. Fiji has never experienced these high temperatures until the last couple of years, and in their winter months the temperature now drops as low as 13 degrees which is also unheard of. Viti Levu, the Fijian Island we are visiting, is a lush tropical island, green and verdant, but for the first time ever they are seeing the landscape turn brown. We have arrived in the monsoon season but they have had little rain for 6 months. The sugar cane, the island’s only real industry, is still growing but is nowhere near as sweet as it should be, and so yields are way down. The lovely beaches are being eroded by the rising sea levels. Resort hotels are finding their famed sandy beaches disappearing. All of this means less income for the island and less employment for the islanders

All this we learn from a delightful young man called Danny

He is 27 years old, tall, slim, and attractive with a great sense of humour, a killer smile and just a touch of fey. Perfect!

He meets us at the ship with a rather battered van. He is wearing a white T shirt over lycra leggings, an enormous pair of sunglasses and a rather fetching patch of wire wool on top of his head. What really catches our eye is the fact that he has more teeth than any one mouth could be expected to hold. He shows us every single bicuspid in one huge welcoming toothy grin.

We found Eco Tours on line. They are a small local company which specialises in showing you a side of Fiji that the average tourist doesn’t see. They learned from our email that we were two men traveling together and sent us Danny. Score one to Eco Tours

We climb into his battered van and drive towards the mountain known as the sleeping Giant (for obvious reasons)                    Ed: If you are still wondering, the head is at the left

We turn onto an unmade road that leads up into the foothills of the mountain.

Deep ruts in the road explain why Danny’s van has seen better days and makes the going very uncomfortable. Finally we bump round a sharp bend and the road descends to a fast flowing river. On the other side of the river lies our destination – a small local village of 150 people. But first we have to cross the bridge. It has no railings, and is barely wide enough for the van. It is also flat so we are just inches above the water. In the water is an elderly woman completely naked, having her morning bath. She is totally unconcerned at these unexpected guests in her bathroom and raises a wrinkled arm to wave, exposing a deflated breast that has clearly fed many children in it’s day.

Danny explains that Erani , the chiefs oldest son, is an expert on all the wild plants that grow in the rain forest and knows all the medicinal remedies they can be used for.

Erani leads us on a trek up into the mountains all the while pointing out different leaves, plants and seeds showing us how to use them medicinally.

Now, dear readers, as you are well aware trekking is not something I would normally choose to do, but this was the first part of the tour promised to us and I rashly agreed to it. However if I had known that the path we were trekking was almost vertical,

that the temperature was going to be 93 degrees with humidity off the charts, and that huge squadrons of mosquitoes would dive bomb every exposed area of skin with alarming accuracy, I would have gone to the botanical gardens along with everyone else.

But the highlight of the trek makes it all worthwhile. A small waterfall awaits at the top of the climb and we all fall into the welcoming cool water.

We can even take a refreshing shower

Back at the village the chief is waiting for us. He is an imposing man, well over 6ft and a very solid 250 lbs. Smiling does not come easily to him. But he is smart.

The chief must insure the economic health of his village. He was astute enough to recognise that his son’s easy charm and extensive knowledge of the surrounding rain forest, plus the fortuitous presence of a waterfall, could bring tourist dollars to his little village. He clearly does not enjoy interacting with these tourists but recognises that he must at least meet and greet, while leaving his son to do the real hosting.

As chief of the village it is also his job to keep the peace on his land and with the neighboring villages. When there is any kind of dispute, illegal activity, or violence, it is the chief who takes care of it. The police are never involved or invited. If the offense is serious enough the offender has to leave the village and then becomes someone else’s problem. A perfect solution.

The chief tells us that his son would like to welcome us to their village with a kava welcoming ceremony, which is a traditional honour bestowed on important guests.

Kava is a tea made from the root of the Kava plant. It effectively reduces anxiety and produces a sense of euphoria, so basically it is a recreational drug and the locals use it as such, drinking it pretty much on a daily basis, whether they have visiting guests or not. What sets it apart from other recreational drugs is that it does not affect your mental clarity, which in my case, doesn’t mean too much. So all in all, the perfect welcoming drink! However should the welcoming party get a little out of hand, and they frequently do, there are some side effects to take note of. First of all it makes you drowsy. Nothing too much to worry about there, except the perfect guest should not fall asleep during the welcoming festivities.

Secondly, and this one is worrying, kava acts as an anesthetic. It can make you feel numb and when imbibed in generous amounts you can actually lose the ability to move. So don’t plan on driving home, or in fact don’t plan on getting home, period.

Thirdly, and this is not good, when imbibed in generous amounts over a long period of time, your skin actually grows a second crusty skin, known by the locals as crocodile skin. So even if you make it home, you won’t be welcomed. Plus, it is pretty hard to hide the fact that you are an addict, when your skin could be made into a fetching handbag and a pair of cowboy boots.

With this in mind I approach the kava ceremony with a certain amount of caution.

The son leads us into their house, built in the traditional Fijian style 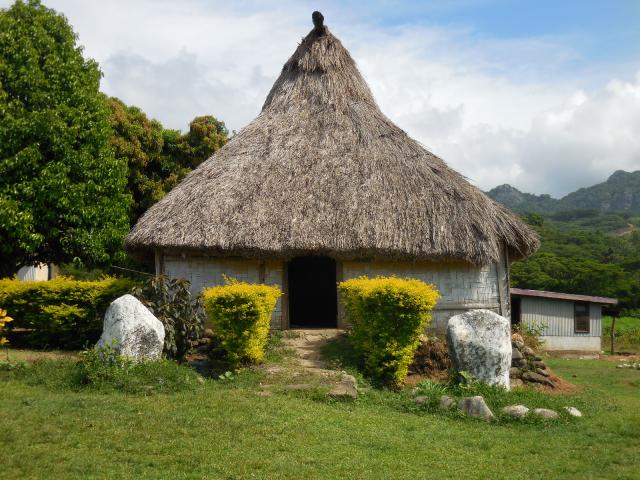 There is one door on three of the sides. The chief sits with his back to the fourth side, so that he can see who is passing any of the doors and can call them into his house for a welcoming drink. I am beginning to sense that kava time is any time as long as you can drag someone in to share it with you. Indeed there is a large kava bowl brewing in the middle of the floor at all times.

We sit cross legged around the bowl and Erani, worried that the existing kava might not be strong enough, adds some more of the ground up root to the existing liquid, straining it through an absolutely filthy piece of sack cloth:

Then, not wanting to waste a drop, he then picks up the cloth and wrings it out with his bare hands. 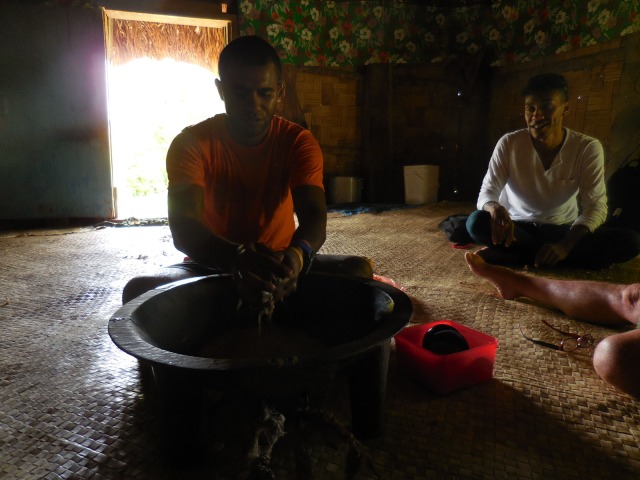 It is looking less appetizing by the moment.

He then produces 4 bowls of different sizes , each made from a coconut shell. He asks whether I would like a “low tide” (the small shell) , a medium tide, high tide or a tsunami which is a coconut shell the size of a washing up bowl. At this point Danny interjects with the news that it is rude to sip the liquid, we must down it in one. Remembering the possible side effects and wanting to avoid looking like a crocodile, I ask for a low tide.

Before downing the cup, I must clap my hands once and say “Bula”.

The liquid looks like liquid mud and tastes like it. I don’t wish to upset my hosts, so I will just describe it as unpleasant. It also has the unnerving affect of numbing my tongue and throat for a few minutes.

Then I must clap my hands three times and shout “Mother”. At least that’s what the word sounds like. I am extremely worried that she will hear me calling, rise from the dead and give me a severe talking to for taking drugs, gulping down my drink and for not using a napkin

Now it is Gordon’s turn. Never one to be overly cautious he asks for a “high tide”. He looks extremely apprehensive as he raises the bowl to his mouth

But much more relaxed afterwards

Erani then offers the tsunami bowl to a very eager Danny, and then downs another tsunami bowl himself, while chanting something in his local dialect. Danny explains that now we have all drunk kava together, we have been accepted into the village and will always be treated as honoured friends. A rather charming ceremony that on one level is quite moving and on another level feels like we have become members of an opium den.

Erani offers us more kava. Danny, seeing Gordon’s enthusiastic response to his first drink, urges us on, clearly foreseeing a major party in the making.

Gordon, for once in his life, shows a little restraint and points out that it is time to return to the ship.

He sleeps through the entire car ride home.

At this point , dear readers, I am going to skip over the remainder of the cruise (loud cheering can be heard in the background)

We have five more ports of call before arriving in Sidney. But they are all small islands with nothing to do but swim and snorkel.

One island is so small it has no inhabitants, and goes by the name of Mystery Island 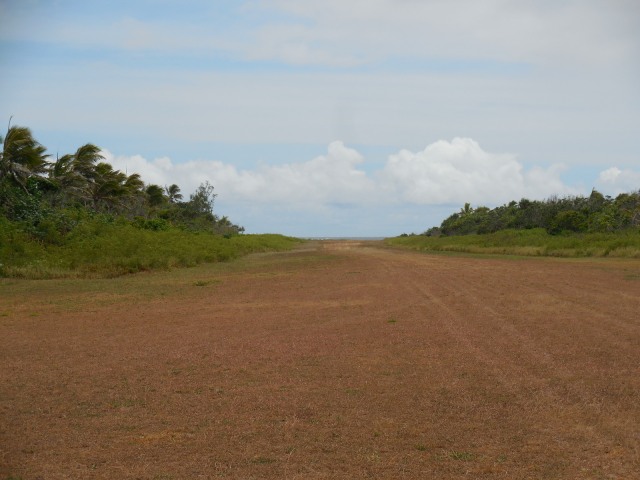 But as idyllic as the stops are

and as wonderful as the snorkeling is, it does not make for an interesting blog.

I will sign off with a big vote for Crystal Cruises. They do a superb job and made the trip very special. The entertainment was amazing, as were the frequent special events. Here is the perfect February 14th one to sign off with