As if to echo our guide Rosa’s, thoughts on tourism, we find that there are only 6 people, including us, staying in our hotel. The restaurant overlooks the hotels own vegetable garden which augers well.

However the two waiters appear to be rejects from the cast of Fawlty Towers . They are very friendly but seem to know approximately five English words between them, none of which pertain to working in a restaurant. Add to this a menu written in English with no Burmese translation, plus the three words of Burmese that we have learned so far, which allow us to greet the waiters, and ask how they are, but are of no use for ordering food, and any reasonably intelligent restaurant owner can see there will be a problem. We tried the English method of communication in such circumstances which is speaking very slowly and very loudly, but that didn’t work. Then we tried pointing at each item on the menu, but as the waiters couldn’t read English, that didn’t work either. Finally we got hold of the waiters’ fingers and stuck them on the menu items we wanted, and sent them off to the kitchen, hoping that their fingers didn’t move between here and there, and that someone in the kitchen would know what they were pointing at. Our success rate was about 60% which seemed acceptable until they brought out a large eel on a plate. 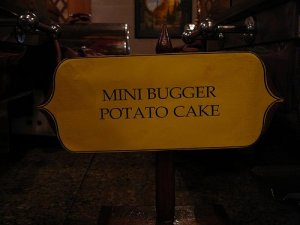 Opening a bottle of wine also proved to be a challenge. Our waiter made several unsuccessful attempts, before we took pity and showed him that it was necessary to remove the foil before trying to insert the corkscrew. When he finally opened the bottle it became obvious that he had been taught that the customer should taste the wine first, but not that just one person did the tasting. On consideration, this seems like an innovation of merit.

There was also some confusion over where to place the knife and fork, but seeing as how Gordon also always gets this wrong, it just made it seem like home. In fact we had a delightful evening, mainly due to the waiters and their hilarious attempts to engage us in conversation. At the end of the evening a head waiter finally appeared, and in fluent English told us that the two waiters were trainees and this was their first week. The waiters had told him that we had been very nice to them and he had come over to personally thank us. We gracefully accepted his thanks, while what we really wanted to say, was where the hell had he been during all this.