Lome, Togo….. you do that voodoo so well

Venance, my guide in Benin, will also be my guide in Togo. He is in his early twenties, well put together and charming. He tells me that he has just finished a four year degree in English and his greatest wish is to move to the States. Something starts ringing loudly. It is not the Fabulosity Meter. It is my internal alarm bells. He keeps the bells ringing the entire day by asking non stop questions about my life, my house, my work and his desperate desire to have a sponsor in the States. He has entered the immigration lottery every year for the last four years but hasn’t won it yet.

He asks for my email address and telephone number. I give him both but accidentally (!) alter each of them by one digit. But this is one determined young man. When I check my emails later that night there is one from him. How the hell he did that, I will never know. It must be voodoo.

When we arrive in the Port of Lome, in Togo, the ship is greeted by a National dance group who perform high energy dances and music for the best part of two hours on the quayside.

Three of the dancers are on amazingly tall stilts. It is the highlight of the day

Venance is waiting for me dock side (of course he is) and greets me with a huge and overly long hug in an attempt to show how we have bonded. He asks about Gordon and I tell him he is still sick. I point to where he is standing on our balcony and he waves enthusiastically and then blows him a kiss. He may be taking this bonding thing a little far.

He then takes my hand and walks me over to the car. If I didn’t already know that African men often hold hands in the street I would be a little worried. But all I have to worry about is how to keep him at arms length for another eight hours.

This time the car is a very glamorous and large Toyota SUV. The driver tells me his name is Tom. I presume tomorrow’s will be Dick and then I will be able to say that I have been driven around West Africa by every Tom, Dick and Harry.

I have told Venance that I am not interested in seeing Lome, which by all accounts is just a large port city, and would rather see some countryside and visit some villages. Venance tells me that the most scenic areas are about two hours drive away.

The roads in Lome are quite good, but as soon as we leave the city they degenerate. They are for the most part paved, but as in Benin the paved area is just wide enough for two cars and then either side of that are enormously wide dirt verges. But here the paved roads are full of potholes. The only repairs are done by villagers who use the road. They fill the potholes with dirt from the side of the road and then dig up a tuft of grass and stick it in the middle of the dirt to warn drivers.

This show of civic duty is presumably to assuage their guilty conscience from their other kind of roadworks. In a complete about face, when they want to set up a road side stall selling their meagre wares, they get sledge hammers and completely remove a large section of the road in front of their stall. This forces all drivers to come to a virtual halt right next to whatever it is they have for sale. A great marketing tool that completely does away with the need for advertising.

It also means that our two hour drive in fact takes three hours.

Togo is also a centre for Voodoo and once again the people don’t want their photos taken. But they are nicer about saying no, and I do find a few people in the large market who are friendly. 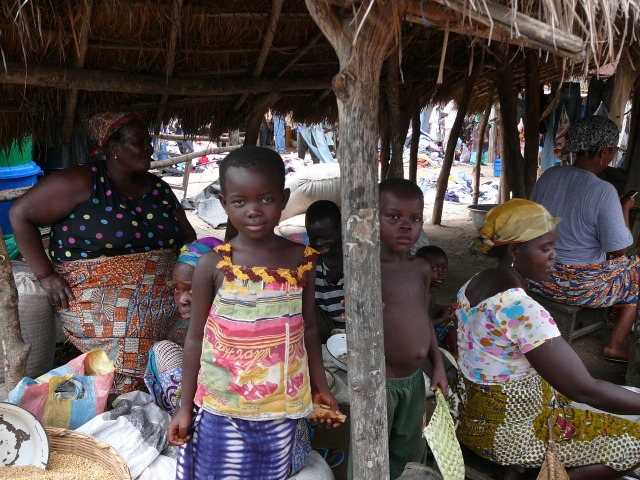 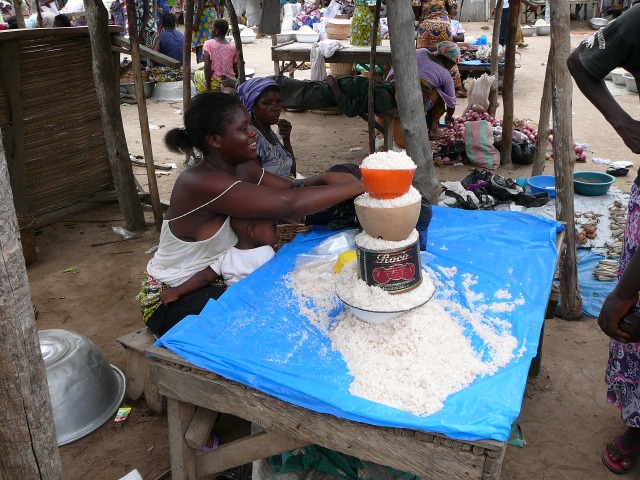 The drive itself is scenic but very long. We pass occasional villages and the further from town we get the poorer they get. But the big difference here compared to Benin is that they are spotlessly clean. A small village consists of several huts circled around an open space of packed dirt. The ground is kept remarkably clean, with no litter – not even a leaf to be seen 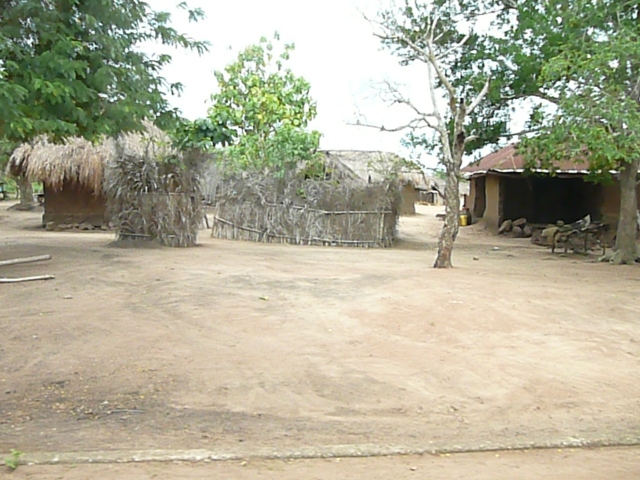 Most of the dwellings are made of mud.

So is the stove on which they cook. They build an oven out of mud with two holes on top, fill it with wood and start a fire. They can then cook on the holes in the top of the stove or inside next to the wood. We stop at a couple of villages which we can reach without going through the vegetation, but everyone disappears when a white man gets out of the car.

There is one other place that I am anxious to see and that is the Voodoo market of Akodessewa, which is, I am told, the only true Voodoo market in Africa. Voodoo followers come from all over the continent to buy the ingredients for their spells.

The first section of the market is outside and consists of huge tables laden with all sorts of animal parts. It is truly gruesome. There are birds, bats 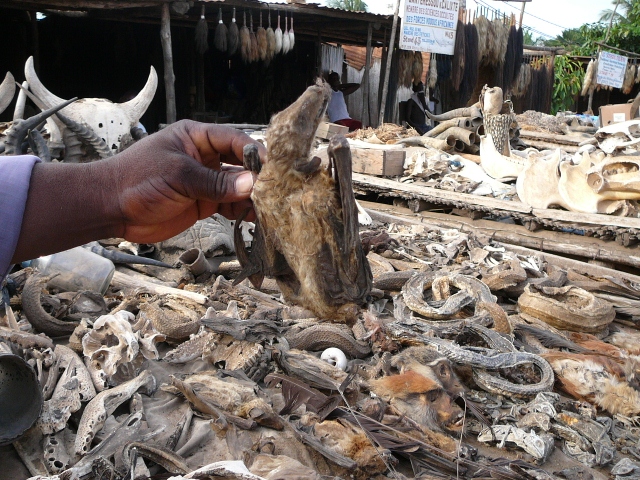 and a rather formidable looking baboon head. 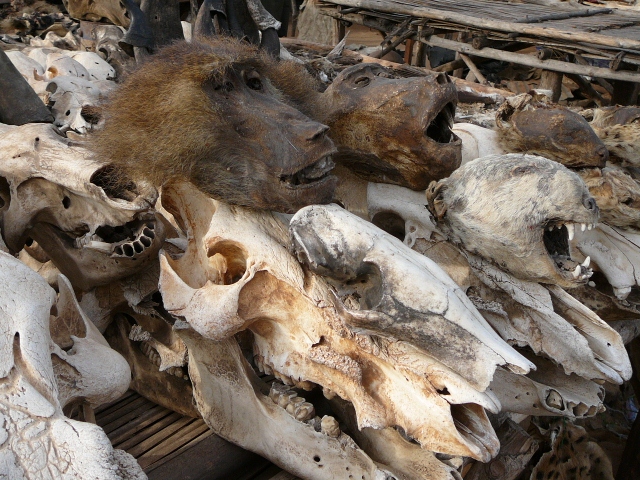 Our guide to the market explains that no animals are killed in the making of this market. Right! They are already dead when they find them. Voodoo followers do not believe in killing animals he says.

“Just people” I want to say, but fear that he will stick a pin in a doll to teach me a lesson

“And what about the animal sacrifices” I continue, but just to myself.

There are definitely times when it is better to say nothing. A trick I have just learned in the past few minutes.

Venance has warned me that it is not OK to touch at this market. If you touch it you buy it. A far more drastic rule than if you break it you buy it. And the threat of what will happen if you don’t buy it is a real incentive to follow the rules.

All the animal parts are for sale at what I am told is a very reasonable price. They don’t become valuable until they are used in a spell by the Voodoo High priest.

I am asked if I would like to meet the Voodoo high priest.

In for a penny, in for a baboon head, I think, and say that I would.

I am shown into a rather pathetic little hut filled with more animal parts and a very old man sitting on a stool. He is dressed in western clothes, with a beautifully pressed camel coloured silk shirt and matching trousers. You could sharpen a knife on the creases, and I suspect he has.

I am not sure what I expected, but this is not it.

The guide translates as the Priest shows me various items and describes their use. He then tells me that in order for them to work they have to be blessed by him, which of course costs money. A lot of money is the implication that is coming across loud and clear. He asks if I would like to buy something and have it blessed.

“Not really” I think” as I hear myself saying “Yes, please”

I can’t believe it – I had no intention of buying anything but he must have cast some sort of spell.

I pick the smallest object, hoping it will be the cheapest. It is a tiny leather sachet, 2 inches by 1 inch on a string. It’s purpose is to prevent anyone from poisoning its owner. I have noticed that Gordon has been spending a lot of time looking at our wills lately, so it seems like a useful protection to have. Inside the sachet there are tiny samples of 41 different poisons, and once it has been blessed none of those poisons will have any effect on me. There seems to be a small loophole here, so I later tell Gordon that it covers all poisons known to man.

The Priest then tells me that he will roll four shells on the ground, and he will be able to tell from which way up they fall, how badly I am in need of this protection. Of course, he explains, the more in need I am of protection, the stronger the spell will be and the higher the cost.

He also tells me that if I can’t afford it I am allowed to say no.

He rolls the beads and three are up and one is down.

“Good news”, he explains. “Your life doesn’t seem to be in any kind of danger so it will not be expensive to cast the spell”.

“What exactly is not expensive” I ask with a quaver in my voice.

He looks me up and down and after a moments thought says “$50,000 West African Dollars”

The guide and the priest are completely unperturbed.

“Well, what would you like to pay” the guide asks.

Ah! That old game. Now I feel more at home. I can play that game.

“It appears to me that as I don’t really need it, I would only be willing to pay $5”

The guide and Priest look both disappointed and disgusted at the same time.

“Let the Priest roll the shells one more time and see what they have to say” says the guide and nods to the Priest, who does as he is told. I am beginning to understand the set up here.

This time there are two shell up and two down.

“Aaaah!” Says the guide, not waiting for any comment from the Priest “Excellent news. The shells tell us that the priest can make his blessing for $15.”

I make to leave the hut, but the guide holds me back.

“Please tell me what you are willing to pay”

I repeat that $5 is my maximum price.

The guide nods at the Priest, who rolls the shells.

This time all four are the same way up.

The guide looks shocked. “You will never believe this” he says

Oh, but I think I will, I say to myself

“The shells say that the priest can accept $5. It is the first time ever that the shells have allowed such a low price. We would both be grateful if you wouldn’t mention this to any of your fellow travelers”

I return to the ship where the tour buses are off loading their passengers. Many of them are clutching assorted body parts with a look of horror on their faces. Their guides had not told them about the “You touch it, you buy it” rule.

I am eternally grateful to Venance. But not THAT grateful