Let me ask you a simple question

This is the dilemma we have been facing. Over the next couple of weeks we will be flying with Air Asia once, and with Malaysia Air four times. We booked long before the dreadful accidents, and now we are faced with the reality of stepping on to their planes.

Today we fly from Chiang Mai to Phuket on Air Asia.

At the airport the signs tell us that the flight is leaving from Gate 12.

We wait there patiently with a hundred or so other passengers. I happen to be looking at the departure board when they suddenly change the departure gate to Gate 4. Gordon and I pick up our bags and head over to gate 4. It is some time before the gate change is announced over the loud speakers at which point the rest of the crowd joins us.

Ten minutes later another announcement is made. The departure gate is now gate 7.

We rush to Gate 7 wondering what is going on. Could they have lost another aircraft? No, it is Malaysia Air that loses aircraft. Asia Air just crashes them

Now there’s a thought that demands alcohol or drugs to go with it.

A couple of hours later we land in Phuket safe and sound and breathe a huge sigh of relief.

We pick up our rental car and drive to our boutique hotel, just 21 rooms on a hillside overlooking Patong Bay. At this point I would like to digress just a little and mention that it was I who found and booked this hotel, and show you a photo of the hotel room:

Then I would ask you to think back to my previous blog where I showed you the hotel Gordon had booked in Mae Hong Son..

Can you notice the difference?

Now I would ask you – would you rather travel with Gordon or with me?

Ed: This is beginning to feel like the old music hall joke.   “As I was sayin’  darn the boozer, people has different ways of bookin’ an ‘otel room?  For instance, take my wife …………….. please!”

OK!! Don’t be mean. I will rephrase that question. Would you rather I book your hotel, or Gordon?

It is about 8 years since we were last in Phuket. We remember the island as being very beautiful, with narrow roads winding up and down steep hills through the tropical landscape leading from one small town to the other, from one gorgeous tropical beach to the next. Patong Beach was the high spot, but not much of one. A bustling seaside resort stretched along a beautiful curved bay with a sandy beach and a clear blue ocean. Behind the ocean drive the town stretched for a few blocks of restaurants, tourist shops and bars. There was in those days a slight hint of seediness with a few rather doubtful looking massage parlors to be found in the back streets.

Today that slight hint of seediness has gone. It has been replaced by full blown, in your face, no holes barred, seediness. The seaside resort has been replaced by a mind numbing ear splitting full blown hell hole. The town now stretches way up into the surrounding hills and suffers from hordes of mainly young, mainly tacky, mainly drunk tourists looking for the three “S’s” Sun, sea and sex. And not necessarily in that order. They bring with them never ending traffic jams, loud thumping music, strobe lights, neon lights, endless bars, and an insatiable appetite for sex clubs, massage parlors and tattoo shops. It is not quite what we had in mind when we booked our 5 nights.

Almost every local seems to be making money from sex or tattoos. Is it a coincidence that both involve sticking a small thing into a body? One causes pain and the other shouldn’t but can. Every other shop is a tattoo shop, usually small with large windows facing the street so that you can watch the mutilation going on. They are always busy with the tattoo artist working on one person while two others wait. This is not the place I would choose to get a tattoo, but it appears I am in the minority as about 90% of the men we see sport tatts, many of them all over their body, and some over their head and face. We, of a certain generation, used to comment on the occasional person who had a tattoo by saying “ what will he look like when he is 70 with that tattoo”

If it’s not a tattoo shop then it’s a massage parlor. In this case the shop is not open to the street. But inside it is much the same with two men waiting while one gets a “massage”.

Outside there is a line of girls trying to entice you in with a smile that promises so much more than a massage. They call and whistle and whisper sweet nothings seemingly oblivious to the fact that what they are offering is the last thing I want.

But in no way are we left out of things. There is also a thriving gay area which goes by the promising name of Paradise Plaza. But if the young men standing outside the massage parlors are anything to go by, it is an empty wallet and the threat of a disease, rather than Paradise that awaits the other side of the bamboo curtain.

And if by any chance you think I am exaggerating (do I ever???), then I would ask you to return to our hotel, which you have already seen is a rather up market, respectable place. When you open the mini bar with me, you will see that even they recognise that their average customer has come to Patong for a little something more than sun and sea:

At night the streets of Patong are packed 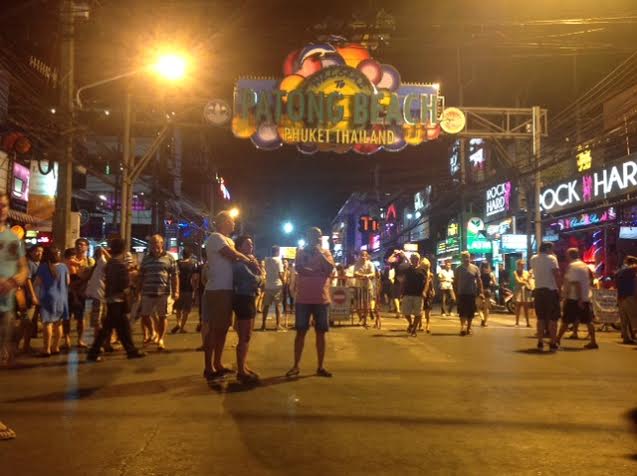 The noise, the flashing neon lights, the clubs and the sex joints all vie for you attention 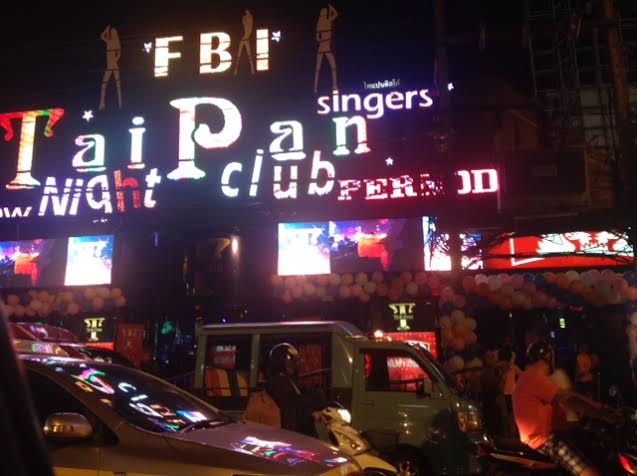 Patong has gone to hell in a Russian hand basket.

It is still the same lovely beach, although the ocean is no longer that tempting shade of blue. But now the beach and the streets behind it are filled with tourists, mainly Russian and Australian

At this point I am pausing once again. This time to issue a warning to the more sensitive of you.

A few years back I went on a rant about Australians and many of you thought I was being unreasonable. I am about to go on another rant – but this one is purely aimed at Australians who visit Phuket. I recognise they are not the cream of the Australian crop. I am also going to rant about Russians, but I guess none of you will object to that

The Australians are generally louder, larger and wear considerably less. The men and women both have an outdoorsy sporty feel to them but without the fit bodies that should go with that look. The men are over tanned, over friendly and overweight with large stomachs hanging over very small speedos. They think nothing of walking through town like this with a beer in one hand and a bunch of money in the other. They talk loudly and talk to everyone.

The women are just as large, just as tanned and just as friendly. They wear tiny bikinis. The top half barely covers a quarter of what it is supposed to, allowing acres of sun damaged skin to bulge out of the top and sides. The bottom of the bikini was never designed for a woman of this shape or size. It is tiny. The front covers the one part it is supposed to cover (thank God!)? But little else. The back covers nothing and is little more than a string that disappears between two large, tanned wrinkled and cellulite laden buttocks. She carries a beer in one hand and a large ice cream sundae in the other.

The Russians look healthier and better dressed (if you like gold). The men are tall slim and fit looking. They wear speedos and look good in them. On the street they add a slim fitting T shirt or tank top that hangs well below the top of the swimsuit and covers up almost everything. They are covered in major tattoos with a gold chain round their neck, and at least one vulgarly large gold ring to complete the look. They are pale, unfriendly and slightly menacing. They carry nothing. That is why they have a woman. They always have a woman.

The women are striking, tall, slim and dressed in long flowing expensive looking resort dresses, with immaculate hair and makeup and a lot of jewelry. They carry a large designer beach bag.

They are not friendly and do not mix.

On the face of it , it would seem that the Australians win the prize hands down for the most obnoxious tourist. But there is something about the Russians that gives them the edge. First of all there are way too many of them – what are they all doing in Phuket? Secondly, there is an air of menace about them. A few years ago when the Russian economy was booming they descended on Phuket in vast numbers and demanded special treatment. They had lots of money and paid for everything in cash and so they got what they wanted. Restaurants nightclubs and hotels sprang up catering solely to the Russians, and there are signs of that (literally) everywhere 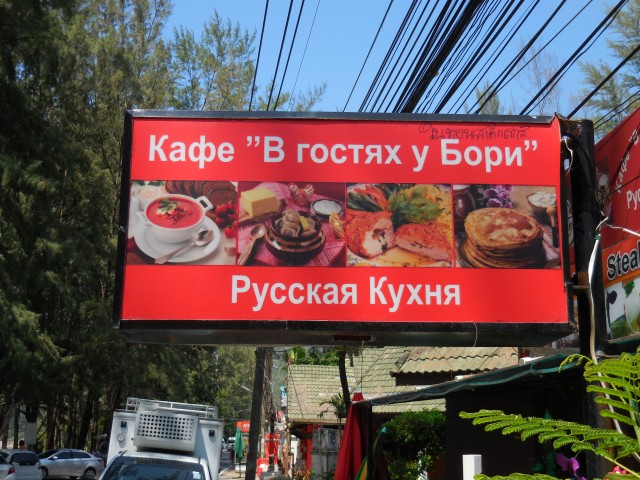 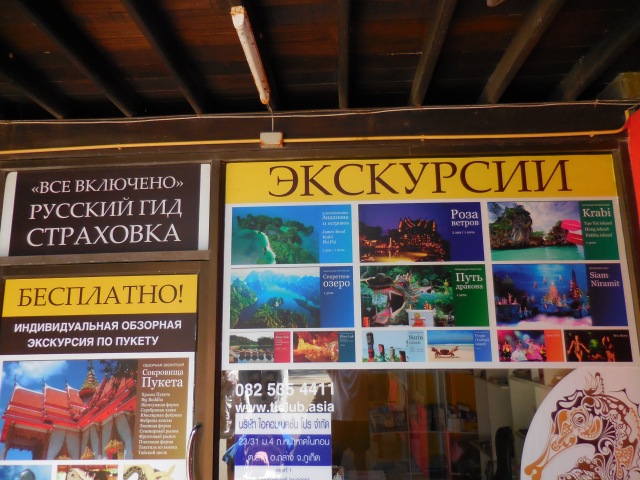 Patong is definitely not for us. We spend our days searching for the beaches off the tourist track. A guide book directs us to several. But the Phuket boom over the last three years is claiming those beaches too. They are still lovely, and the sea is crystal clear. But the crowds are slowly finding them

and every beach has a huge hotel complex being built behind it.

We would return to this Island of Puket, but it would have to be soon. It seems as if the entire island will be one large Patong suburb before too long