The middle of nowhere, Mexico

From Havana we fly to Mexico City

From Mexico City we drive to Angangueo

The centre of the universe to Monarch butterflies. Thousands upon thousands of them migrate here every year for two months. It is an incredible sight and it is why we are attempting to drive to the middle of nowhere.

We have bought a GPS system especially for this Mexico trip. It doesn’t work. We have to resort to the method we used in Cuba which is mapping it on Google Maps before we leave, then working from a print screen of the map on Gordon’s IPad. It is better than nothing but only just.

There are two ways to get to Angangueo. The fastest takes about 3 hours but it involves driving right across the centre of Mexico City. Gordon is wary of doing this without any GPS. The second way is longer but we don’t have to cross the City. It should take 3 1/2 hours, but with Gordon navigating it takes 6 hours. We both get frustrated but there are few road signs. We feel like we are back in Cuba. We are worried that we won’t get to Angangueo before dark. Driving in Mexico in the dark is not safe. The roads are unlit and sometimes bad.  Mexican drivers are sometimes drunk and bad. The banditos are unlit, sometimes drunk and always really bad

Angangueo is in a steep sided valley high up in the mountains, 8400 feet above sea level. At first glance it is an attractive town 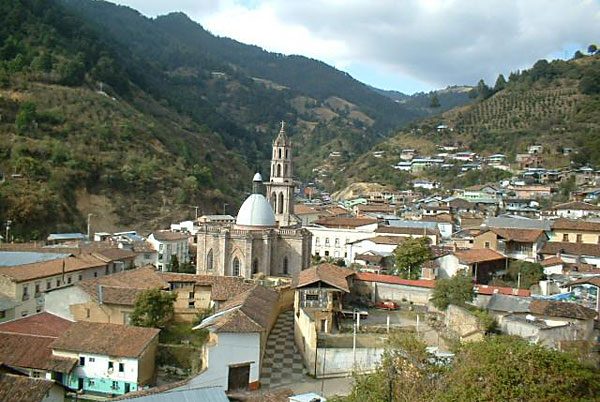 At second glance, not so much. Up close it is a little sad. 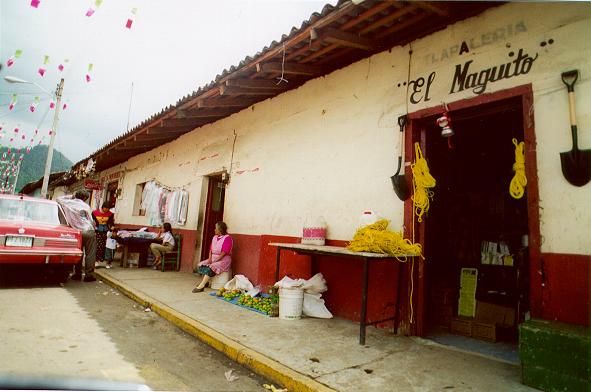 The streets are deserted and in terrible condition, 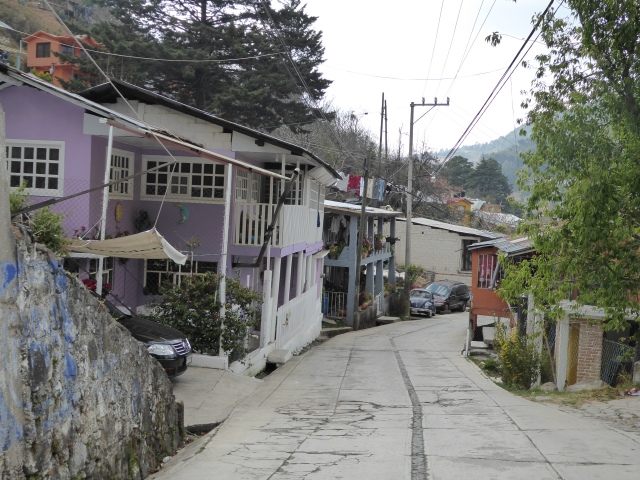 hotels are boarded up, and there is only one restaurant that we can find.

It was once a prosperous silver mining town but they ran out of silver. Then it became a logging town. They didn’t run out of trees, but the government halted most of the logging to protect the butterflies. Now it relies solely on tourists who come to see the Monarch butterflies. It is a very short season and sadly most tourists do day trips from Mexico City (obviously they don’t have Gordon navigating) and don’t set foot in the town. The locals are having a very tough time, and on the outskirts of this small town their dwellings look as bad as many we saw in Cuba 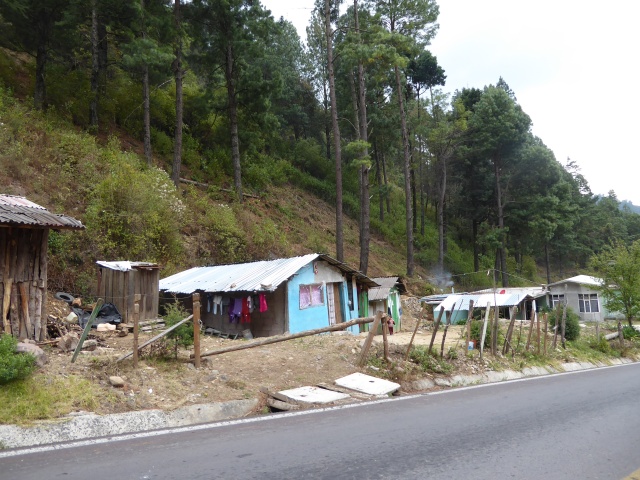 We have searched the internet for places to stay and there appears to be only two small hotels in town that are still open and appear habitable. We have booked the number one hotel on Trip Advisor but all the comments have prepared us for a very basic night’s stay. We are however encouraged by its “curb appeal”. 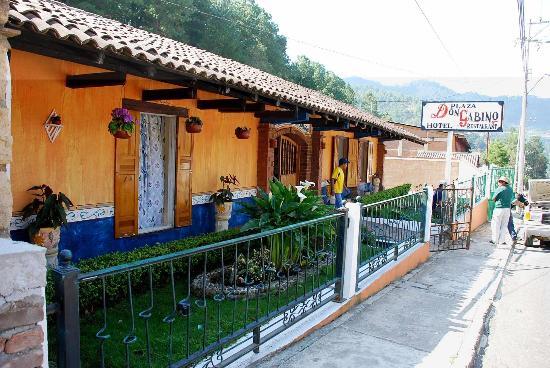 How charming is that.

It is run by a mother who hides in the kitchen all the time and two children who appear to be still teenagers. The children do all the work, while mother cooks. None of them speaks any English. The daughter runs to get her brother to speak to us when we arrive. He tells us he is taking English classes so that he can run the hotel better. That would be very promising if he told us that in English. But he doesn’t. He tells us in Spanish.  He is a nice young man, and he tries really hard to please. He is full of smiles and nods and gestures but not of English. Either he is not too bright a student or he needs to take classes for a lot longer. It might be both.

It is cold and as the sun goes down so does the temperature. By 8 pm it is just a few degrees above freezing outside. Inside it feels even colder. Reviewers on Trip Advisor frequently warn that the nights were so cold they slept in their clothes.  What we should have gathered from that – but didn’t – is that there is no heating in the hotel.

There are 8 rooms that go for $60 a night including breakfast and one suite that goes for the exorbitant price of $80. Now, dear readers, which room do you think we are in. I know Gordon thinks I am  extravagant and always want the best, but I booked it anyway without consulting him. I am getting quite brave in my old age. 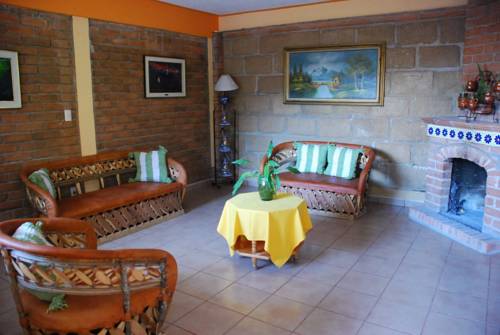 It has a fireplace, but no sign of a fire

The son asks us (in Spanish) if we would like to have dinner at the hotel. We have already explored the town (it took about 10 minutes) and discovered the single restaurant which was deserted and not appealing. The hotel restaurant has a certain charm so we accept. 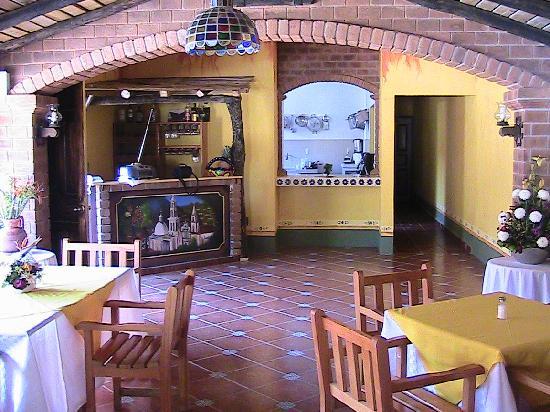 He asks what time we would like to eat and we say 8. He looks shocked. At first we think it is because Mexicans like to eat late and 8 pm is too early. But it is quite the opposite. He wants us to eat at 6. We try to negotiate a later time but he won’t budge. Finally he agrees to 6.30

When we arrive there is a table of four already seated. They have grabbed the one table by the fireplace. But, like the fireplace in our room, it is empty. No fire, no logs, nothing. The four are two gringo couples in their sixties who live at Lake Chappala, a popular retirement place for expats. They are dressed in every item of clothing they have brought with them. Many layers of sweaters plus hats, scarves, gloves and huge warm jackets. They have been here before. We have not come prepared and have nothing that warm to wear. Then two single women of the same age arrive, also suitably dressed. We are beginning to feel foolish.

The young son appears in jeans and T shirt, apparently perfectly comfortable in near freezing temperatures, and asks if we would like a fire. There is a loud chorus of  “yes” which leaves him in little doubt as to our feelings. Two minutes later he reappears with an armful of logs and some matches. Incredibly he builds a roaring fire in about five minutes, He would go a long way on “Survivor”. The room quickly warms up and much to our amusement the expats start taking an item of clothing off every five minutes. We tell them we can’t wait till the end of the evening.

That seems to break the ice and from that moment on the 8 of us in the restaurant start drinking, talking and laughing. The food, plain and satisfying, comes and goes without comment, but the alcohol flows freely. The hotel has just 5 bottles of assorted red wines sitting gathering dust on a shelf behind the otherwise empty bar. We demolish those in no time. The expats and the two women announce that they have bottles in their rooms and fetch them. We are liking them a lot. It becomes quite a raucous evening. By 10 o’clock the family has had enough and the son refuses to put more logs on the fire. By 10.15 the clothes are going back on the expats and it is time to go to bed.

We ask the son if he would light a fire in our room. There is a stunned silence from the others.  Little did they or we know that the only room with a fireplace is ours.  We retire to our room and have a pleasant evening sitting in front of the fire reading.

The next morning we try not to gloat, but I am not sure that we are entirely successful.